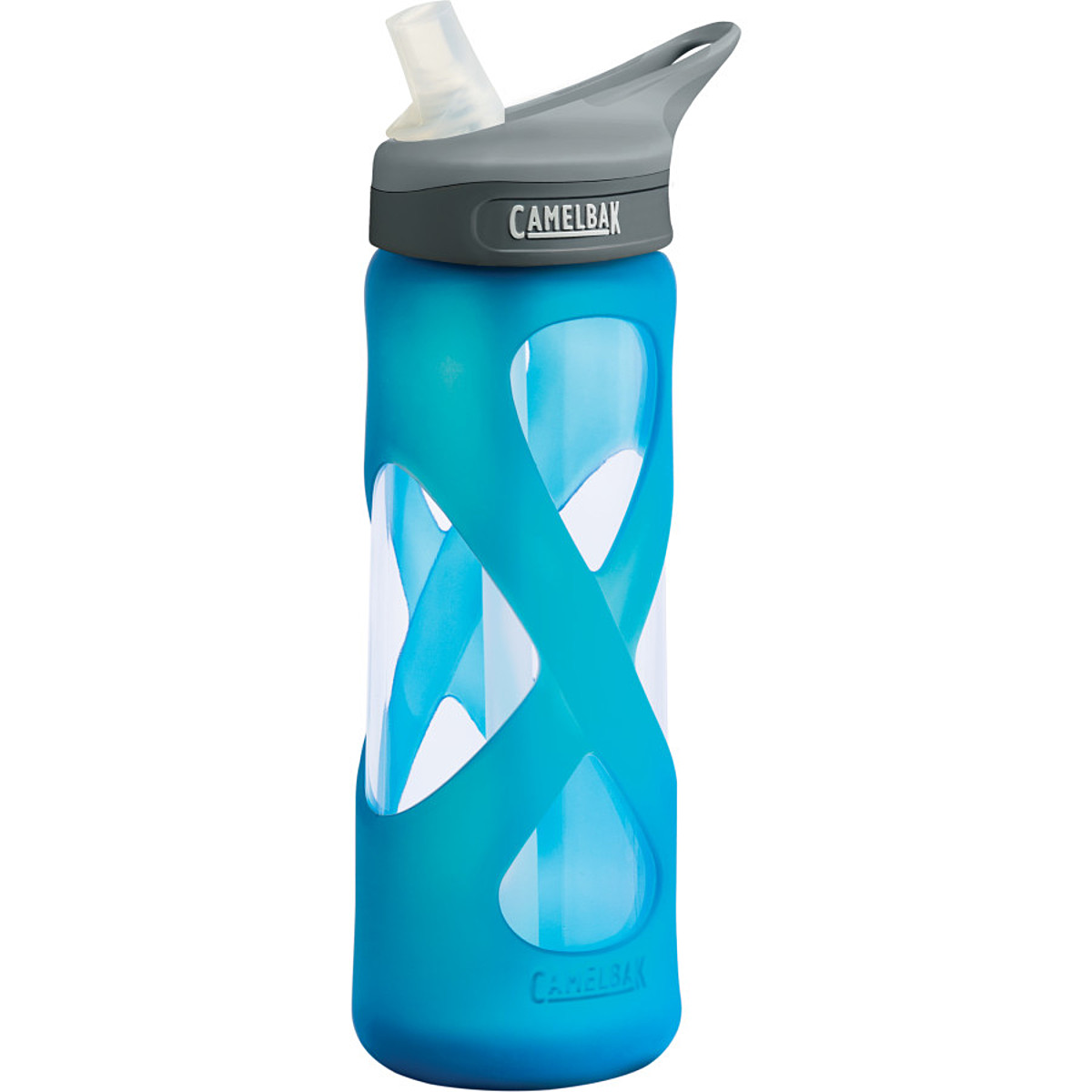 This is a review of the CamelBak eddy glass bottle. For those who fear chemical leaching from plastic, the glass bottle offers a chemical-free experience. CamelBak was smart enough to sell the bottle with a grippy sleeve. Due to my concerns about breakage and the weight of the glass bottle, I expect to use this more around the house or in a canoe, rather than for backpacking.

I have a feeling that CamelBak's foray into the world of glass bottles has a lot to do with concerns about BPA and not so much to do with backpacking. It is, in many ways, a sort of throwback in its simplicity and old-school character, and that carries certain risks as well as rewards. Nonetheless, I like the bottle and will no doubt use it regularly where it makes sense.

Carrying water used to be simple. There weren't that many choices. Today, we have bladders, plastic bottles, steel bottles, insulated bottles, "unbottles." I am already getting dizzy writing this.

A couple of years ago, we threw out three perfectly good hard plastic (lexan) bottles due to concerns about the possibility that a chemical, BPA, could leach into the water and cause some kind of genetic damage.  Some research, which is of course subject to interpretation and dispute, suggests that all kinds of plastic containers have the capacity to leach...something into the water which may or may not be good for you.

Steel seems to have become an acceptable antidote, though most metal bottles come with an inside coating, and some of those coatings can, over time, break down and leach BPA. I'm getting dizzy again.

The bottom line is that you have to be careful about your water storage choices if you are concerned whether chemicals might leach into the water.

Oh, and some people just don't like the taste of plastic. 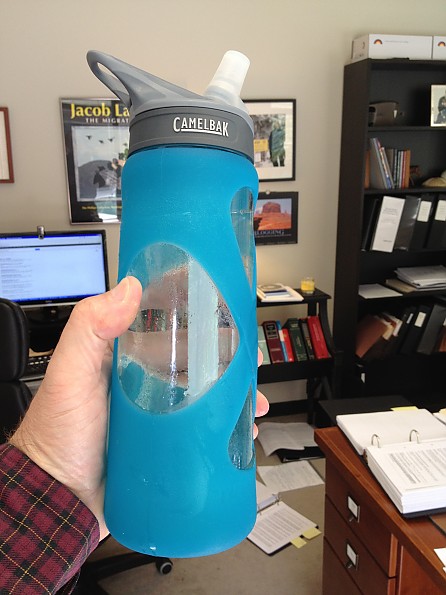 One thing that CamelBak's new eddy glass bottle will not do is leach chemicals or minerals or taste like plastic. It's a food-grade glass bottle, dishwasher-safe, made in France. The small symbols of a wine glass and fork on the bottom are industry code for "food and beverage safe." 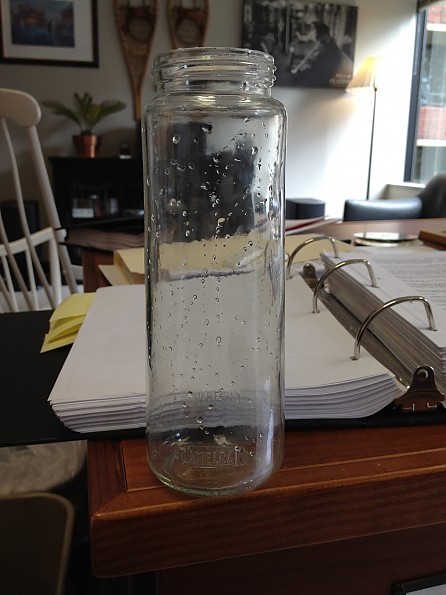 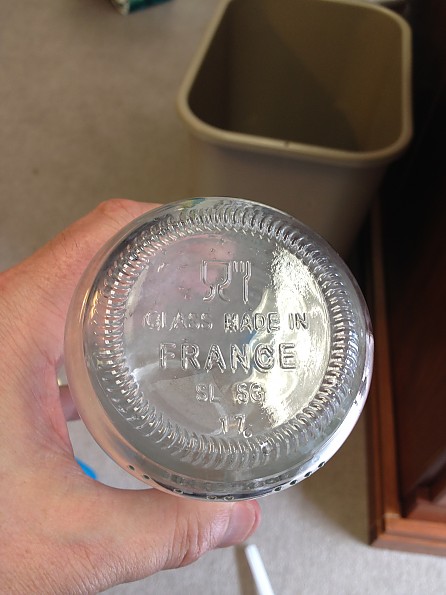 The bottle is also less likely to slip out of your hand than a comparable CamelBak plastic bottle because it has a soft, grippy silicone sleeve. The bottom of the sleeve has just enough substance that it might cushion a limited knock on the ground, but for me, the main value of the sleeve is the ability to grab and hold a glass bottle, even if it is wet.

The design is classic CamelBak — same shape, .75 liter, same top, spout and straw as all the newer eddy bottles. 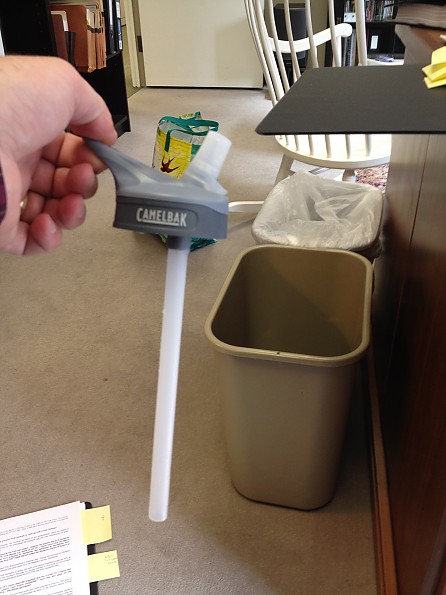 This is not a bottle for ounce-counters. The comparable CamelBak Tritan plastic bottle weighs a little more than five ounces. This bomber comes in at 20 ounces for the same storage capacity.

Also, while the glass feels robust, I'm reasonably confident that like any piece of glass, no matter how solid, an ill-timed whack would probably risk breaking the bottle. Anyone who has unthinkingly tossed their daypack or dropped their backpack should think hard about how this bottle might suffer if the exterior bottle pocket on their pack hits the ground hard. Or how often you have accidentally dropped a water bottle while hiking.

I'm fairly careful but probably won't end up using this much on the trails. On the other hand, I have taken it to a couple of soccer games recently and have been using it pretty regularly around the office. For those purposes, I like it a lot. I would also be more inclined to use it for fruit drinks, milk-based beverages, and the like because glass is easier to clean and sterilize than the alternatives.

Back when our family dumped the BPA bottles, we also stopped buying supermarket milk in favor of weekly delivery from a local dairy. We have observed that our kids drink a lot more milk out of those big glass milk bottles than they did from plastic or waxed paper cartons. It's hard to explain, but there is something about the glass bottles that makes the milk seem cleaner, tastier, and more appealing.

I think the same logic may apply here. While I will probably hesitate to take this bottle on the trail due to its weight and risk of shattering, it has already become a bottle of choice for places where I don't care how much it weighs and don't fear it will hit the deck.

Kudos to Trailspace — this bottle was part of a goodie bag I received for Reviewer of the Month.

Source: received it as a sample, freebie, or prize (Trailspace!)

You're welcome, leadbelly. Glad the bottle is working out for you, and thanks for sharing this review.