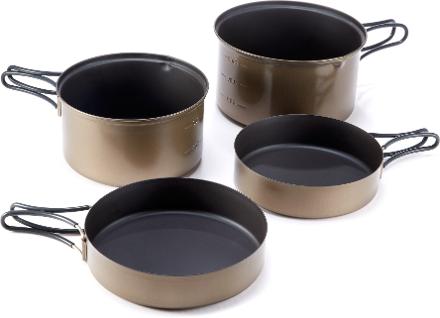 Although lightweight, very thin material. If you cook little it may be good for weight weenies. Not enough for a recommendation.

Below is a picture of the Evernew nonstick cook-set made specifically for REI by Evernew. 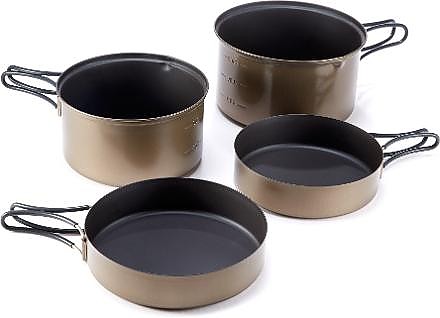 First, I am reviewing it here because it seems REI will not allow 1-Star reviews on its website (at least in this case as no matter how I tried I could not get this review to post on its site). Normally I would not care, but I feel that a company should allow good and bad reviews.

The cookset is made specifically for REI by Evernew and it actually says that on Evernew's website. Before I bought this I went to their website to look at specs and there were none, but it stated that they had entered into a relationship with REI on specific products.

It seems like a good set, and I did like the fact that it was light. And it is very light. In context I have used Snow Peak pans in the past, and they are light too.

Unfortunately, this set is so flimsy and thin that I personally sent it back. I just could not see how it would be functional at all. It is paper thin metal, and so much so that you can bend the pans and lids by hand. I could literally bend the pans like pretzels if I wanted too. Yes...that thin. I found it difficult to fit the lids to the pots, as you had to squeeze them a bit and even then they did not fit correctly.

It is cheap...reduced from $124.95 to $86.93 with free shipping. I thought this was a great deal, and like the idea that the pans were also lids. But as I said above, they were so poorly made that I could not see how I could even use them in the real world camping situation.

It would be a two-handed affair to cook with them, as you would have to hold the pot and place the lid (pan) with the other. Oh...and the nonstick coating is so thin that you can see wear marks just from the transport of the products in the box.

I was shocked that Evernew would produce such a product! I like their stuff a lot, but this has jaded me on purchasing more of their products.

Thanks for sharing your experience with this cookset, Snakey.

Trailspace's community of gear reviewers has field-tested and rated the top cookware.