The Access has been discontinued. If you're looking for something new, check out the best approach shoes for 2023. 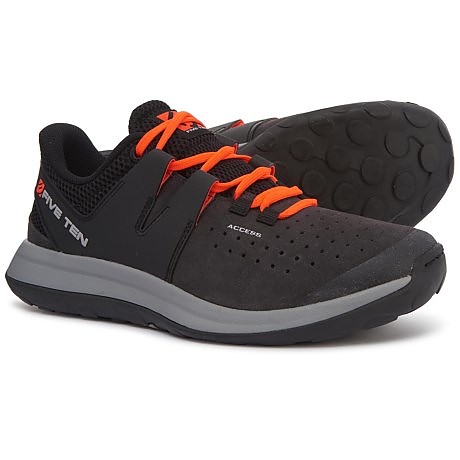 The Five Ten Access is a lightweight, low cut approach shoe that offers superior traction, support and durability. The Access would be best for someone looking for an all around Access shoe (get it?), whether that is an approach for climbing, hopping on a flat pedal bike for the day or light duty scrambling (maybe up to low fifth class). They could make some improvements by adding a heel loop to clip them to your harness and extend the lacing to the toe. 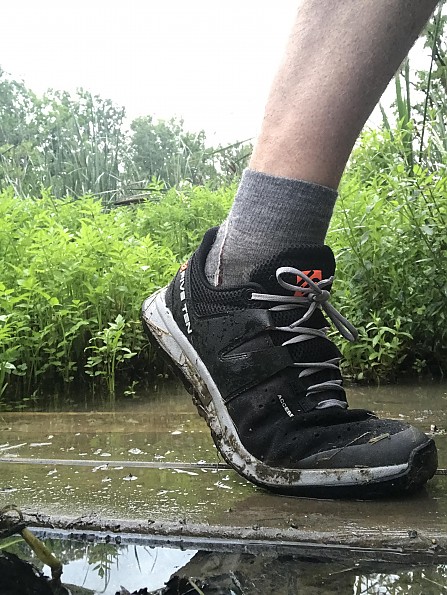 First we need to address the question of what is an approach shoe, and what should it do? Quite simply an approach shoe is anything you wear to get to your climbing destination—boots, shoes, runner, etc. To me an approach shoe must be primarily three things—lightweight, grippy, and supportive. I want something that isn’t going to tire my feet out before a day of cramming them into climbing shoes, provide solid footing for hiking or scrambling, and provide support from twisting an ankle or sharp rocks under foot. If they can climb a little, and keep you from having to cram on your climbing shoes till a little later, I guess that's a bonus as well.

To be honest, a standard old trail runner often meets two of those three criteria. So why do I need a whole new pair of shoes? Well you don’t NEED them. Honestly, before testing these shoes I just wore whatever the oldest, most beat up pair of runners I currently owned was. After testing, I reach for these, every time, even with the few flaws I’ve found in them. Here’s why….

I have a very narrow heel through to the ball of my foot with average toe splay and a medium arch. I have found the Access to be too wide both in the heel and the mid foot. The toe box is nice and roomy, which is especially helpful on downhills as I’ve never experienced any banging. It certainly aids in the approach but the lack of “to the toe lacing” definitely hinders its climbing ability.

Don’t get me wrong, mild climbing is still no problem but compared to something like the Guide Tennie with lacing running right to the toe and the narrower toe box, it certainly won’t match.

The arch support is great and I’ve found my feet aren’t tired even after wearing these upwards of six hours a day. The lacing system is well designed and tightening the laces pulls in the back of the heel through a rubber exoskeleton. I’ve found it helps to take up some of the volume of the heel but I have to wear them really cranked down. From reading others opinions on these I am in the minority. As I’ve said I have the classic “La Sportiva" last of a foot so if your anywhere near a slightly narrow to medium heel these would fit great. 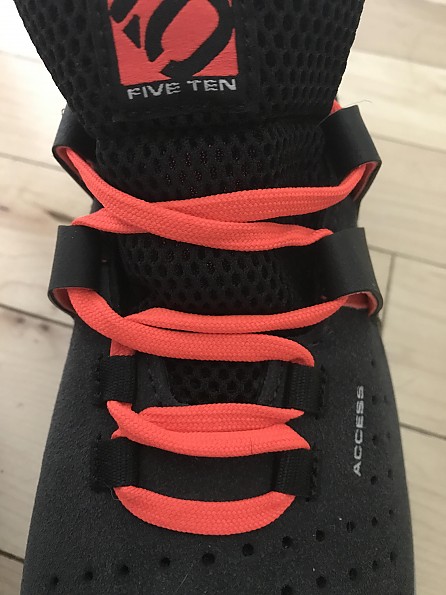 (The Access comes with two pairs of laces, nice touch. I quickly switched out of this colour...)

I wore these out of the box on a light hike the day after I received them. No blisters at all even though the fit wasn’t spot on. The tongue is nicely padded to even tightening the laces up hard doesn’t amount to a lot of pressure over the top of the foot.

A toe cap comes up nice and high to prevent you from getting overzealous while jumping rock to rock. Well, maybe not prevent, but at least minimize the pain.

At only a little over 14 oz they certainly aren’t the lightest option you could pick but are far from bruisers and are a welcome comfort after a day of climbing. 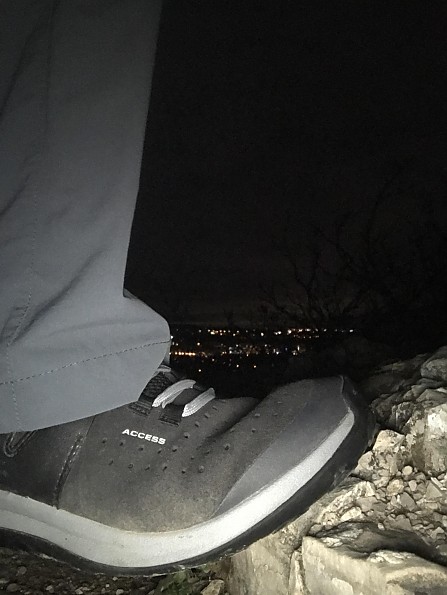 I was hoping that this nubuck upper model would add some weather resistance on top of the added durability (as compared to the Access Mesh model (see my review). Spoiler alert...it doesn’t. Unless you count staying dry for roughly another minute or two. There’s no membrane keeping the water out so the leather quickly wets out. That water weight that is absorbed can be less than enjoyable if your dragging these shoes up behind you (see: wet butt and legs from hanging them off your harness), and the extra weight of the leather, over the mesh model, is amplified.

I’ve had no issues with the mesh model tearing after abrasion with granite so I’m inclined to recommend them, over the nubuck upper, as the added breathability is welcomed. 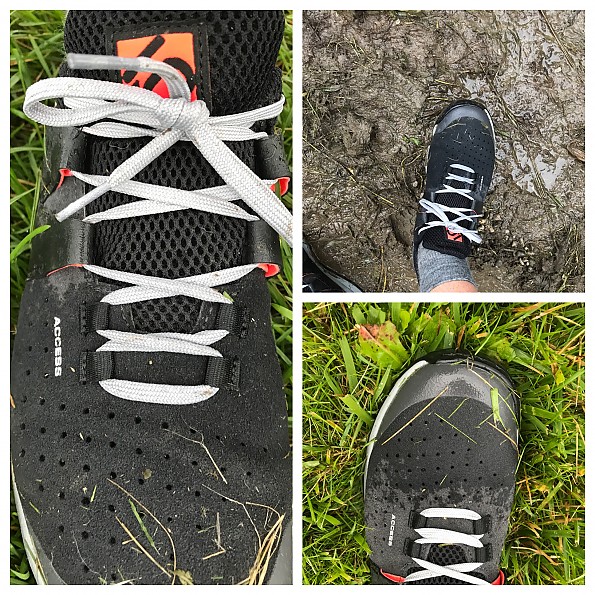 (You can see the progression of wetness over a relatively short time.) 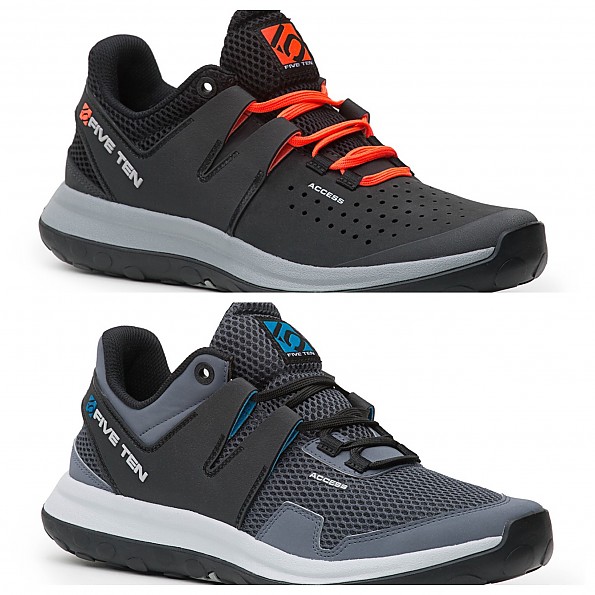 Now we’re into the meat and potatoes of where this shoes makes its living. The Stealth S1 rubber. Originally designed for the Five Ten climbing shoes its been adapted and put into a dotted pattern sole to give you confidence you’ve never had before. These things stick like glue (especially if you’re cheap like me and are used to wearing old, worn down running shoes).

Taking inspiration from their climbing shoes the ability of the the Access to smear and edge is something often not found on approach shoes. The midsole is stiff enough to support the weight without a lot of foot fatigue all the while not sacrificing the ground feel or sensitivity. These are certainly not running shoes, and you’d be foolish to mistake them as such. There is very little rebound to the midsole. The dot pattern and the quality rubber make even the most polished limestone, shale, and granite that I’ve had the chance to use them on seem like I’m walking on a boardwalk.

I do wish there was a flat area on the toe instead of continuing the dot pattern. It is a thicker rubber across the toe to add some durability.

The mid foot is fairly flexible which aids in the shoe's ability to smear and to provide a wide, stable grippy area of friction against rock. The sole is a little stiffer, and thicker, than I would like but I think that’s to compensate for the softness and (relatively) quicker wearing of the rubber. You can read about that below. 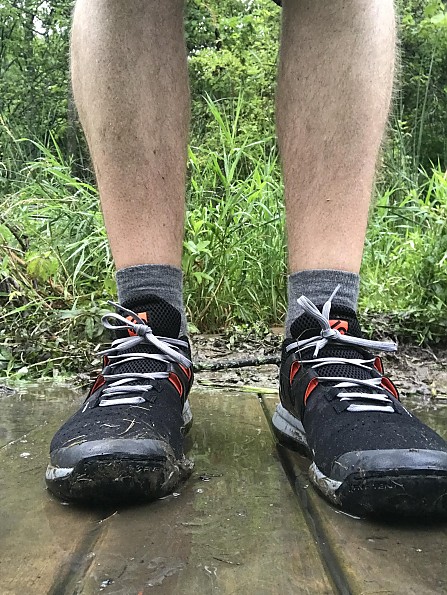 The Access is offered in two different models, this one with a nubuck leather upper and one with a mesh upper, the Access Mesh. As you can imagine they have a significant gap in terms of abrasion resistance. Climbing a lot of granite cracks? Get the leather version. More open, exposed approaches and can sacrifice some durability for breathability? Get the mesh uppers. The leather model used for this review shows little signs of abuse even after being jammed in cracks and sharp edges.

The Stealth S1 rubber wears down. You can’t really have your cake and eat it too. I don’t think this is necessarily a negative. Softer rubbers are stickier. If you want that added grip you're going to have to give up some long-term durability. I have around 100 miles on each pair (probably more on the mesh pair) and the tread is (in my best estimation) at most, maybe 20 percent worn down. Depending on the type of rock and the frequency used I could see them lasting at least three or four more seasons of climbing. That said I do believe this was the right choice in rubber as it meets a happy medium of durability and grip. 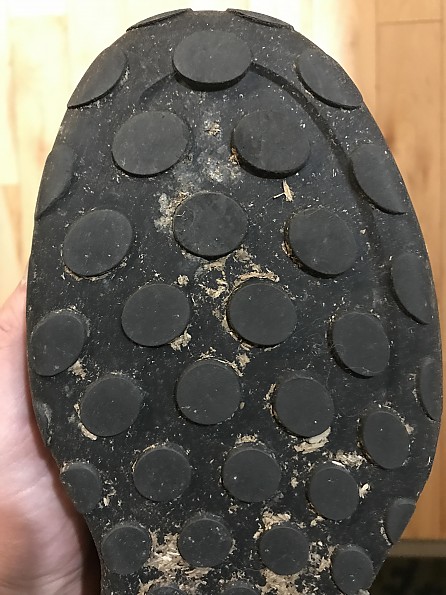 Last thought… Please put a loop on the heel for hauling them. It’s a blatant oversight on an approach shoe with the reputation of Five Ten. You have to use the laces (or the lace loops) and it just doesn’t work as well. 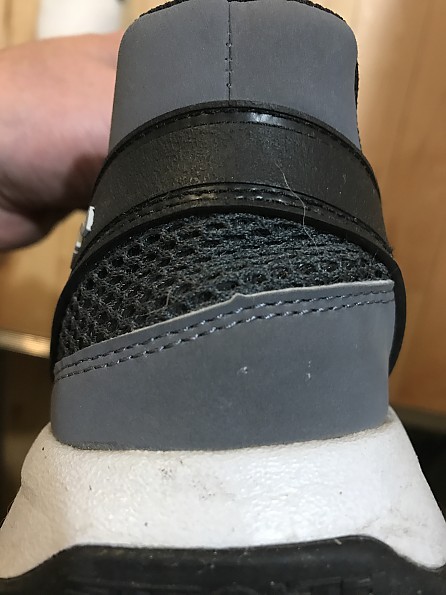 (Photo is of the mesh model, but neither pair has a heel loop)

I have a size 11 or 11.5 foot dependant on the manufacturer and ordered a size 11. I feel like they fit true to length although I’m wondering if I should have gone half a size smaller to get a more performance fit. They have been worn for over three months and travelled with me from my home in Canada as well as on trips to New Hampshire and South Carolina.

My preference (certainly during the summer testing period) was to favour the mesh model. While I prefer the leather model, visually they just don’t add enough weather resistance to overcome the superior breathability of the mesh. I probably have around 130 miles on the mesh and 90 on the nubuck through a range of activities—hiking, approaching climbs, biking, traveling, and around town. 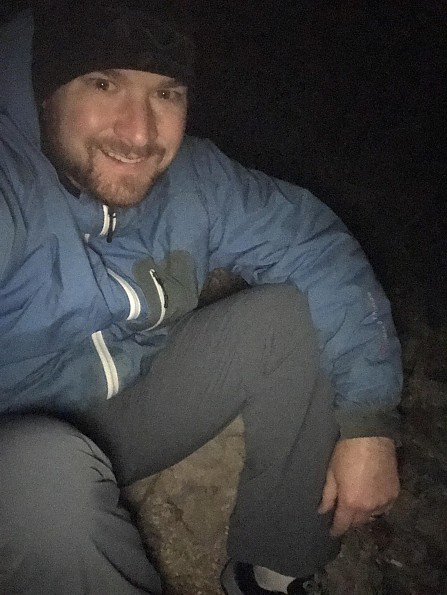 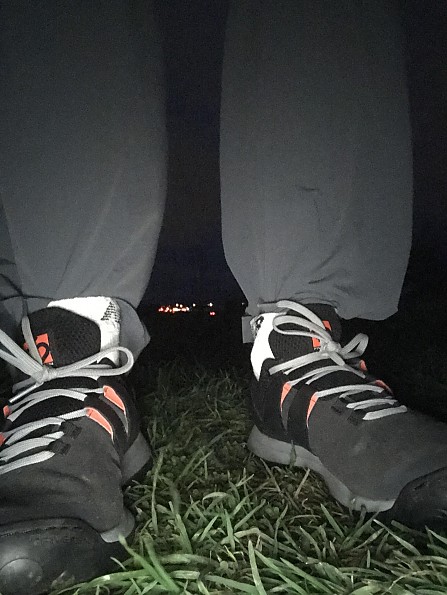 Source: received for testing via the Trailspace Review Corps (Sample provided by Five Ten for testing and review)