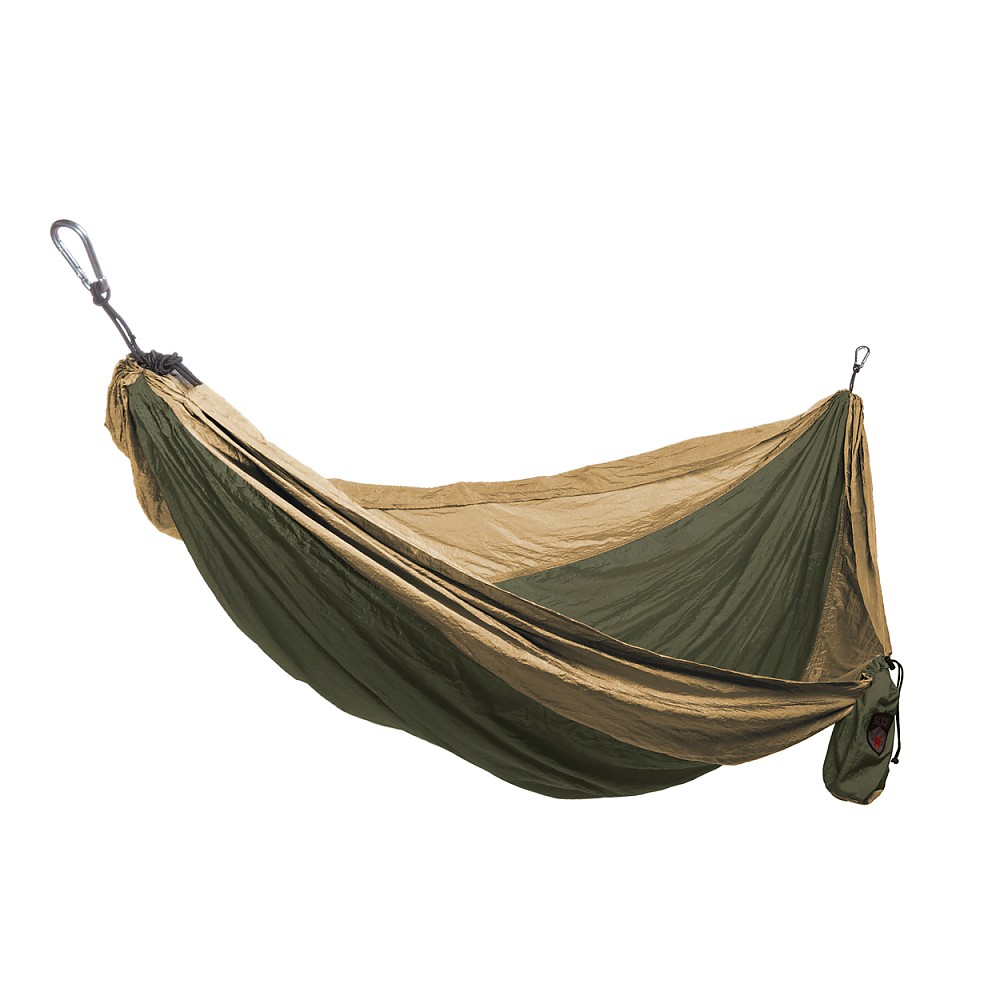 It's really lightweight, packs down really small and is super comfortable. It is cheaper than comparable hammocks from other companies even though it includes a hanging system. It's a great option for backpacking, hanging up in the backyard, or wherever you want to use it (as long as there are trees of course). Enjoy it, you deserve it.

I bought this hammock about 3 weeks ago, while working at a summer camp.  I slept in it nearly every night for 2 of those weeks (some rainy nights included) and can say that it was probably the best night’s rest I’d had all summer.

Starting with what I like about it, it’s cheaper than the ENO double hammock but weighs the same, is just as strong and also includes the suspension system, which is lacking from the ENO.  While the hammock is hung up the attached stuff sack doubles as a storage pocket for whatever you need throughout the night.  I’ve stored my phone, headlamp, flip flops and a book in it at the same time and still had room left over.

The hanging ropes are really nice, other than the fact that they can be too short to fit around larger trees.  They make it easy to set it up at whatever firmness you want.  Just figure out how tight you want it and make a knot, problem solved.  Because of this, setup is really simple.  Again, I only wish the ropes were maybe 2 feet longer each.  They also can make marks in the trees so you may want some webbing or some protection for the trees.

The hammock itself is pretty long, plenty wide, made of a great material and is solidly constructed.  I am about 5’ 6” tall and it is about 10’ 6” long, so it really was no issue for me and I don’t imagine it would be for anyone else.  It has plenty of room for 2 people, though I can’t say that I’ve used it for two people.  I have had two people sit in it, with a combined weight of about 300 pounds and had no issue with the system failing.  There are flaps on the edges of the hammock which can close overtop of you at night to block out light and help protect from bugs. Keep in mind that nothing protects from bugs as well as bug netting.

From my experience sleeping in it, I’ve used it in temperatures down to 50° F degrees.  I used a 25 degree down insulated bag that is over 10 years old and wore a fleece and was comfortable the whole night.  In temperatures below 50° F I would probably add an under quilt to help insulate below the hammock because I could definitely feel heat loss through the bottom of my bag.  Using it in rainy weather requires a tarp overtop because it’s not waterproof but it does offer the advantage over tents of being off the ground so you can stay drier from below.

Overall, I consider the Grand Trunk Double hammock one of the best purchases I’ve made in a long time.  I can’t wait to use it more to see how durable and long lasting it is. But go ahead, buy it.  You know you want to… and you won’t regret it!

The space in this hammock is amazing. Whether you are just chilling out or in the backcountry, this hammock rocks!

As a member of another website, I sometimes get the opportunity to try out products in exchange for a review, and I was recently able to try out the double hammock. I have other Grand Trunk products, Skeeter Beater Pro and Single Hammock, and have loved them both. I was excited to see just how much more space the double had to offer.

I've had others tell me that even if you plan on never having another person in the hammock with you, you still need to get the double hammock for the space. After spending a summer in the hammock I completely agree.  I often take hammocks with me into the backcountry to sleep in, in addition to just lounging around in them, and the extra space is amazing. It truly shows up when you are sleeping at an angle in the hammock and feel like you have all the room in the world. 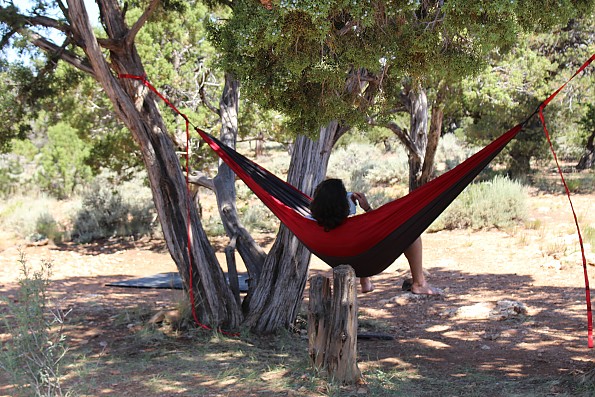 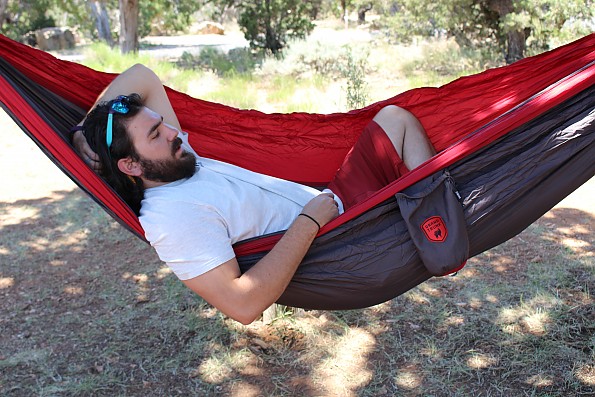 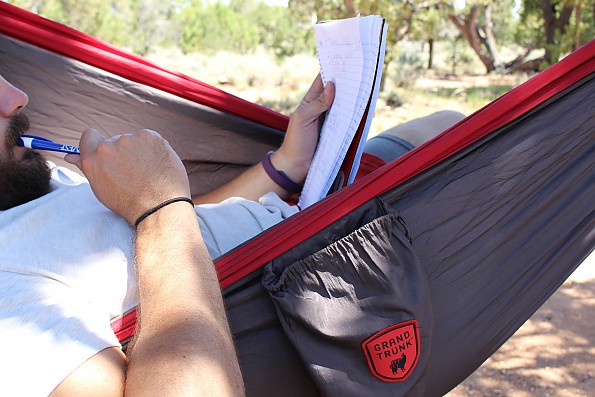 Wide enough to wrap around you and just the right length for great comfort.

Our small, local outfitter carries Grand Trunk as well as ENO hammocks.  Both are comparable in price, quality, and choice of colors.  Where Grand Trunk excels is the perfect balance of size vs. weight for a parachute cloth hammock.

The GT Double is wide enough for a low angle diagonal lay and not have to struggle with keeping your bag, pillow, gear, whatever, from falling over the edge. The GT Single is likewise comfortable, but nearly as amenable to a diagonal lay and will force you back into the banana shape. The Double also has so much soft fabric that you will sink in and almost completely wrapped, which is handy for privacy and mosquitos.

The hammock comes in as many varieties of colors as imaginable, with a built-in stuff sack (comparable to ENO), and comes with plain poly rope for hanging. I've always used straps and/or whoopies for adjustability and saving the trees from rope damage (gott'a have trees...), but keep the rope as backup or extra length.

Downsides? In the stuff sack it is about 20-30% longer than an ENO, and the double is a bit more diameter than the singe, as expected.  The fabric seems heavy duty, and very soft and cool against the skin, but I ripped a bunch of small tears in the bottom by letting it brush against a sticker brush (briers or blackberries), so be careful. Easily patched with camp patch tape.

Definitely recommend for car camping, and backpacking if you are not overly concerned about weight (28oz) by itself.

This hammock is very easy to set up out of the bag. It has all the carabiners and rope to attach it to almost any solid foundation: http://youtu.be/99AHAK6bGNo

The material and construction of the hammock can hold me without any problems.

Just received an early Christmas present from my sweet boyfriend. We set it up in the yard yesterday and I am in love with this product already! Cannot wait to take it backpacking and try it out. It's very comfy, beautiful Hibisbus Floral print...it's awesome!!

We will be swapping out the standard carabiners that came with it as they are really too heavy for backpacking. Also, it came with some rope, will be switching to straps, hopefully orange ones :). 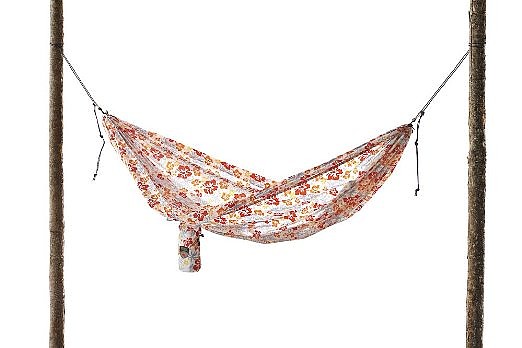 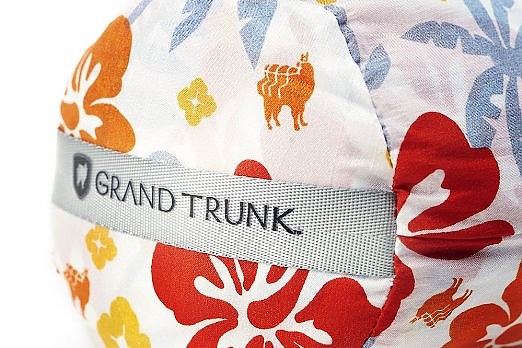 This is an easy to set up and even easier to relax in hammock. Like all Grand Trunk products, I was highly impressed!

I absolutely love this hammock. My husband and I fit in our hammock together without feeling like we are going to touch the ground or fall out. The fabric is soft, like synthetic silk. It is thin yet stubbornly tough. I've never had a snag or a seam come loose.

A BIG advantage to Grand Trunk is it comes immediately useable 'as is' out of the box with included ropes and metal carabiners. This is a great AND affordably priced choice for casually tossing into your day pack for a midday break on a long day hike or a car camping weekend. Packs down relatively small in size in its own sewn-on attached drawstring sack.

Source: received it as a sample, freebie, or prize (Grand Trunk Goods)

$69.99
Buy Now »
$69.95
Buy Now »
$49.95
Buy Now »
Check Price »
Help support this site by making your next gear purchase through one of the links above. Click a link, buy what you need, and the seller will contribute a portion of the purchase price to support Trailspace's independent gear reviews. 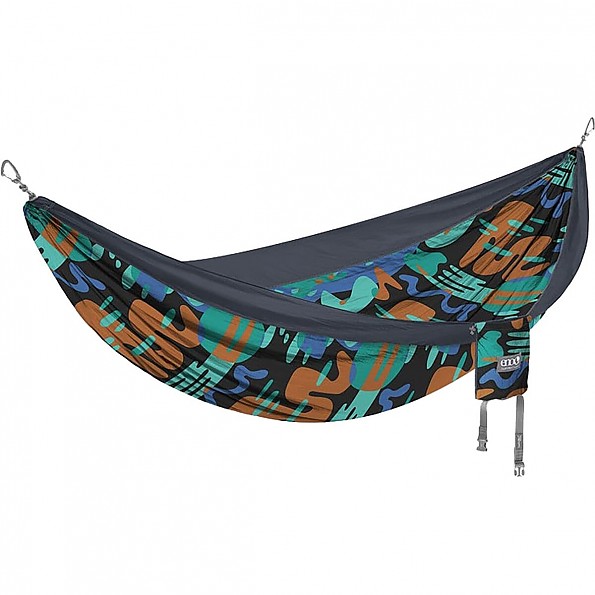 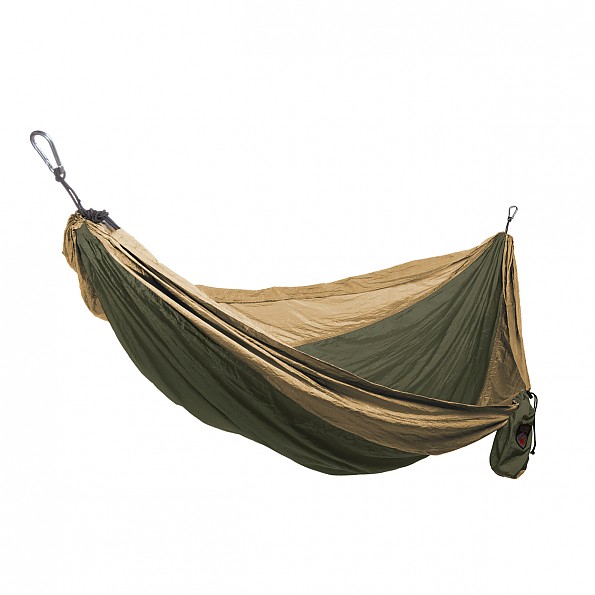