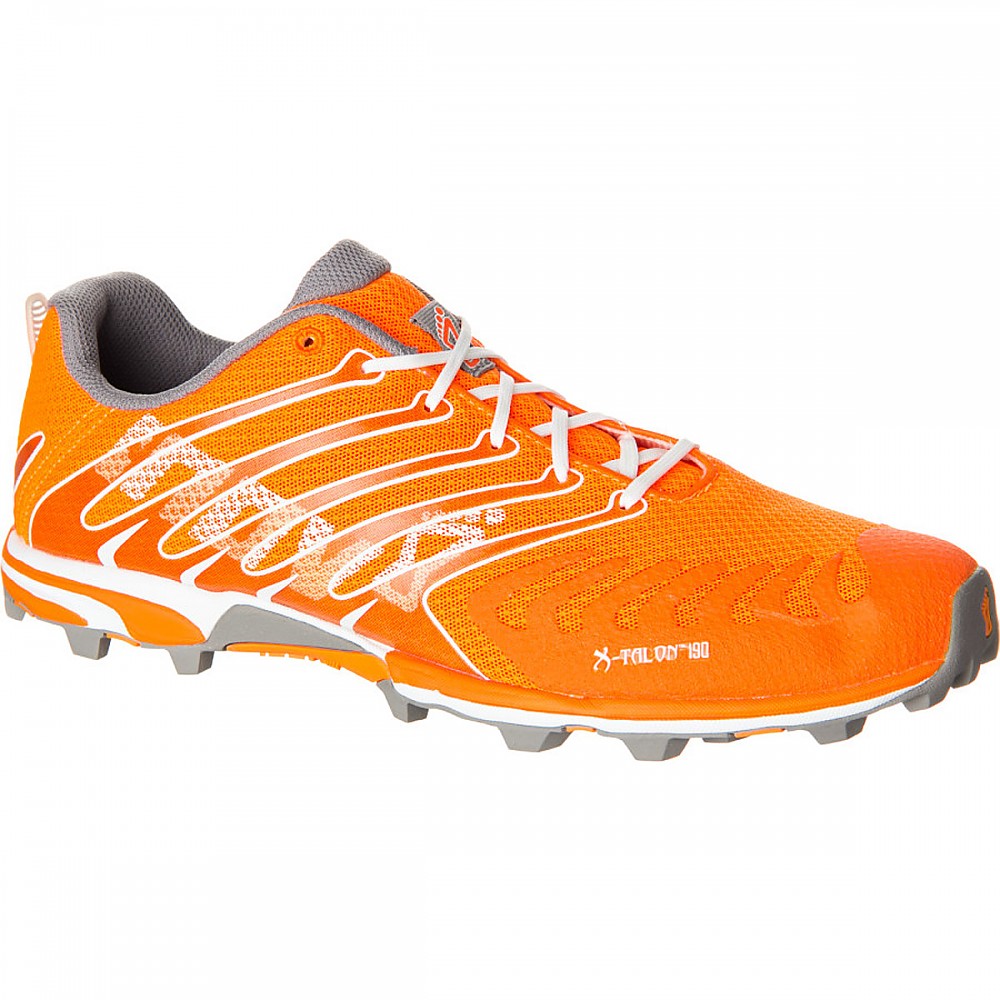 Until recently my trail shoe of choice has been the Inov-8 Mudroc 290. Over the last couple of years, however, I've been making the transition through minimal and into 'barefoot' shoes. My road and dry trail running shoes are now Merrell Trail Gloves.

I think any shoe with 'Trail' in their name should be able to handle at least moderate mud, but the TGs don't do this at all well. The Mudrocs cope with mud extremely well, but now feel rather bulky and thick-soled (in sharp contrast to my review from 2007, when they felt lean'n'light to me!)

For a while I've been after a barefoot, or at least very minimal, shoe suitable for muddy runs with steep inclines. Inov-8 are the only manufacturer who cover these bases properly; the Bare-Grip 200 has no midsole and a very deep, studded tread and the X-Talon 190 has a very thin midsole and a slightly shallower, but still very aggressive, studded tread. I'd tried both on and decided on the 190 for a couple of reasons: the 200's tread is more than I would need almost all of the time and a little midsole is useful on very steep descents where it is still necessary to land on the heels.

My super-jazzy, bright red 190s were delivered last week. When trying them on in the house, I found they fit better with the insoles removed, because I have very lumpy heels, which fit in the heel cup more naturally when my foot is lower in the shoe. I don't mind this, as I'm used to using other shoes sans insole, although it does mean I have to cinch the laces in almost as far as they can go to get a secure fit.

The upper is mostly mesh, with a 'printed on' TPU lacing support cradle and thin protective layer of rubber around the toes. The end of the sole also wraps up and over the very front of the toes to add further protection. As you would expect, the upper offers very minimal overall protection and no water resistance. Of course the upside of this is that they dry very quickly.

They have excellent trail 'feel' and grip, as you would imagine. Of course they're also extremely light: my U.S. size 12s weigh in at about 8.5oz/shoe, a full 3.5oz less than my Mudrocs. All this adds up to a shoe that is fast, both objectively and subjectively.

I had a 10.9 mile trail race lined up a couple of days after they arrived, and just had to use them for it! No thoughts of a gentle try out on an easy training run: that would be like buying a Ferrari and trying it out with a grocery shopping trip. They look like they want to be raced.

For me, these shoes give me everything I want (grip, precise fit, sufficient protection for my feet) and nothing I don't need (unnecessary cushioning, midsole 'technology' and layers on the upper, all adding to the weight and deadening the feel of the shoe). I really enjoyed racing in them, finding them a comfortable, as well as high-performance, shoe.

If your hamstrings and calves aren't used to the 190's very low toe-heel differential (1/8 inch Vs 1/2 inch for mainstream shoes), using them exclusively, straight off will cause you some major problems. This isn't a fault: minimal shoes may be more natural (we're not born shod), but if you're used to mainstream shoes, you can't just go straight back to nature, however appealing that sounds. I think the transition to this type of shoe is worth it, but if you can completely accomplish it in a year, you're doing well.

If you want a fast, light, precise, grippy trail shoe and don't mind minimal cushioning and foot protection, and a low heel, get some X-Talon 190s.

After my initial review, I tried them with thinner socks and found I can wear them quite comfortably with the insoles in!