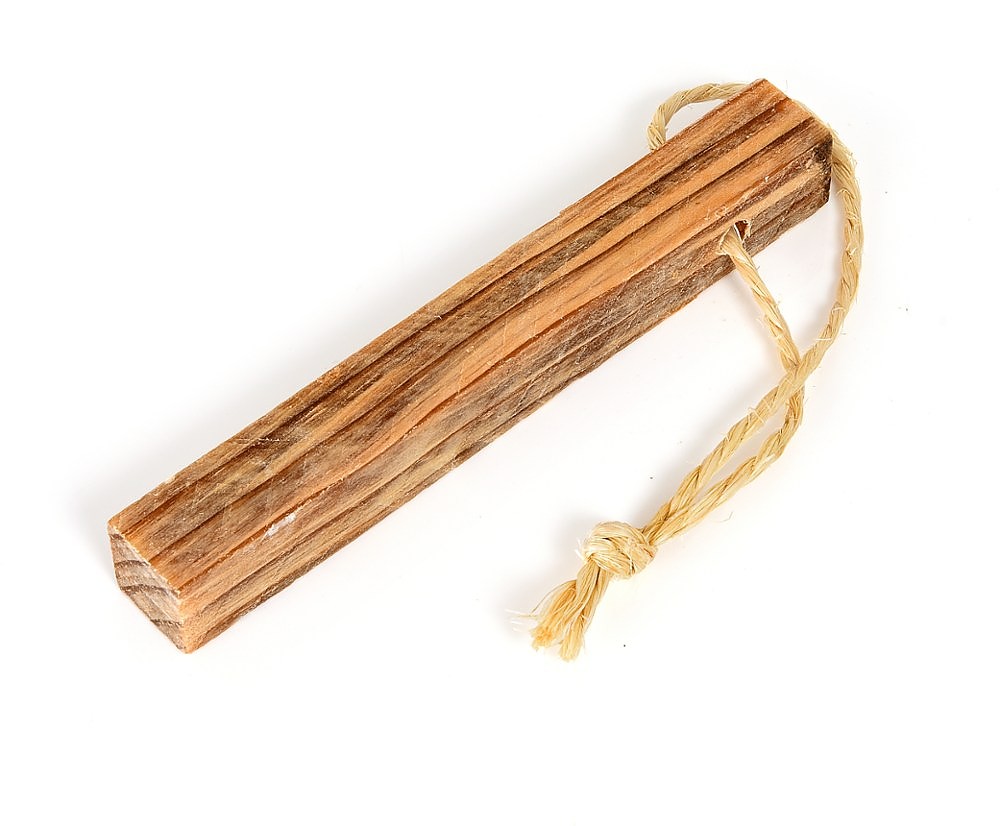 Tinder-on-a-Rope is a very reliable fire starter that is easy to use and functions well even after it has been exposed to moisture.

It you tend to carry fire starter beyond just a pack of waterproof matches, then this would be a solid choice to carry as tinder to help start a fire.

First off, I want to say that I received my Tinder-on-a-Rope from Trailspace as a gift for being a past Reviewer of the Month. 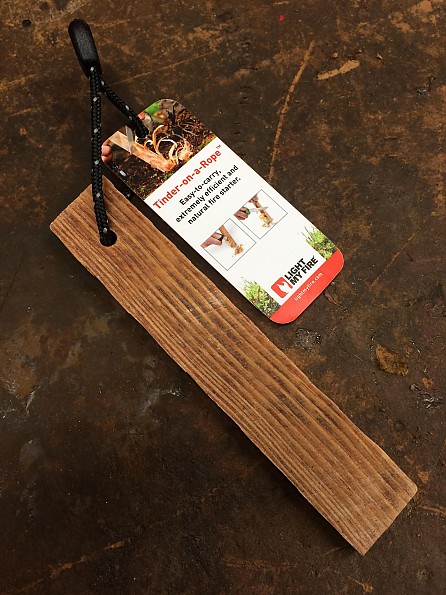 When I first received my Tinder-on-a-Rope, I kinda thought to myself well "whoopee" I just got a piece of wood that has a loop of cord running through a hole in one end. I have a shop at my house and have plenty of wood lying around and started to wonder if there was really anything special that made this piece of wood different.  I generally don't carry any tinder and when I do need to start a fire when I am out camping/backpacking, I usually can get a fire going with what ever paper or dry wood I can scrounge up. Maybe I have lived a sheltered life, but I haven't really ever been interested in comercial tinder, but since I now had this Tinder-on-a-Rope and some spare time (I'm retired...) I figured I'll see if there really was any difference between this piece of wood with a cord at one end and some of the other wood that I had lying around my shop.

Doing a little digging on the internet I found that Tinder-on-a-Rope is really what is referred to as "fatwood". Fatwood is a resin soaked wood that occurs naturally in the woods and while I won't go into detail on how it comes into being, I will provide the following link to a website that provides a nice discussion on fatwood: http://masterwoodsman.com/2013/firestarters-fatwood/.

Since what I really wanted to determine was if Tinder-on-a-rope was really any better than other woods for being tinder to help start a fire, I figured I would do a test. My Tinder-on-a-Rope was about 6 inches long a little over an inch wide and about a half an inch thick and weighed about 1.4 ounces with the cord and label. I chose to use a similar size piece of cedar and Brazilian cherry for the test as the cedar is a nice light wood that burns easily and the Brazilian cherry is a heavy dense wood that may have a high resin content like the fatwood used for Tinder-on-a-Rope. In the photo bellow starting from the left is the Brazilian cherry, then the cedar, and then the Tinder-on-a-rope test samples. I all the subsequent photos and videos the samples remain in this same order. 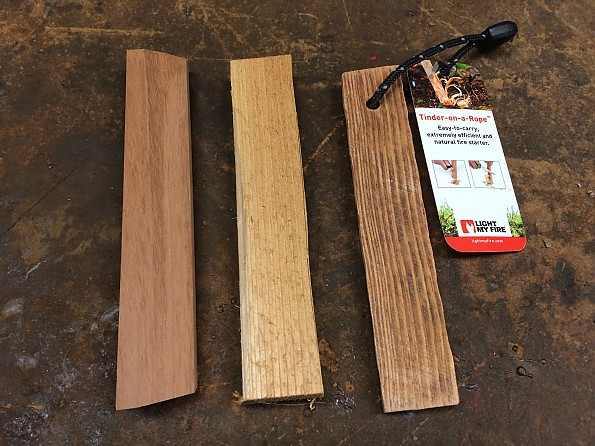 For my first test I made a pile of very fine shavings from each of the samples and then used a magnesium fire starter to see how easy it would be to ignite each of the piles. Using a magnesium fire starter is dependent on technique, but the real focus here is on if the shavings can be ignited and how easy they can be ignited. One interesting note from making the piles of shavings is that once I started to cut shavings from the Tinder-on-a-Rope there was a very strong turpentine scent that was probably due to the very high resin content of the wood. The following video shows the actual test.

What I got from this test was that all three types of wood could be used to start a fire using a magnesium type of fire starter, but the Tinder-on-a-Rope was the easiest to get lit and generated a bigger flame and burned longer.

I decided to run a second test to take the variability of the magnesium fire starter out of the test and replaced it with a common wood style kitchen match. The following video shows that test.

The results of this test were similar to the first test in that the Tinder-on-a-rope started and burned much better than the cedar or Brazilian cherry, but again all three would have worked to start a fire.

For a third test I though I would see how easily each of the three woods would ignite using a larger shaving. While very fine shavings are always easy to ignite and needed if you are using a magnesium fire starter, a larger shaving may be harder to ignite. The following video shows the result of trying to ignite a larger shaving from each sample using a kitchen match.

The results of this test were similar to the first two tests in that the Tinder-on-a-rope started and burned much better than the cedar or Brazilian cherry, but again all three would have worked to start a fire.

One of the features of Tinder-on-a-Rope and fatwood is that it is supposed to not be affected by moisture, so I decided to soak all three test samples in a tub of water overnight and then rerun some of the tests. The following is a picture of the samples soaking in water and while the Brazilian cherry and the Tinder-on-a-Rope were dense enough that they stayed submerged on their own, the cedar sample needed to be held down with the open end wrench. 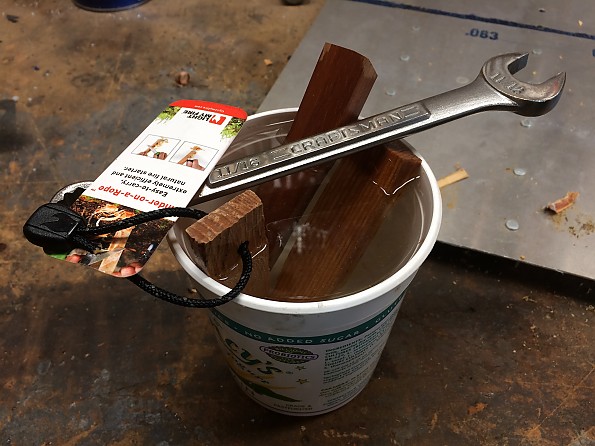 After soaking for about 18 hours the test samples were removed and dried off with a paper towel. 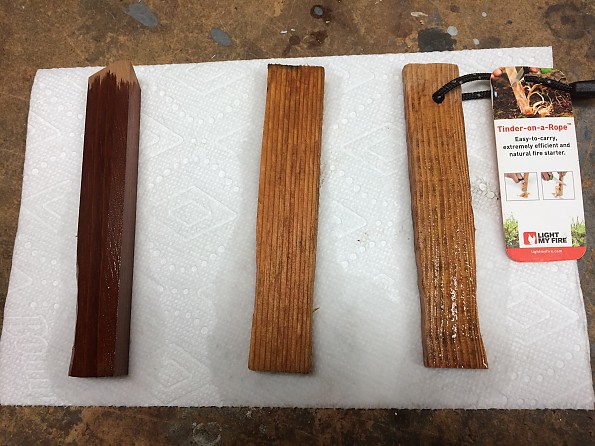 Within a few minutes of taking the samples out of the water, I reran the tests using a kitchen match to try and ignite a pile of fine shavings from each sample and then trying to ignite a large shaving from each sample.

The following video is of trying to light the piles of fine shavings from each of the samples after soaking.

The following video is of trying to light the large shaving from each of the samples after soaking.

The end result of each of these tests found the both the Brazilian cherry and cedar samples had absorbed enough moisture that fine or large shavings from the samples could not be lit with a kitchen match, but the Tinder-on-a-Rope was largely unaffected after being soaked in water for 18 hours and could easily be ignited by a common kitchen match.

My conclusion out of all of this testing is that Tinder-on-a-Rope lives up to its intended purpose and can be counted on to be a reliable and easy to use tinder even if it has been exposed to moisture for an extended period of time. This would be a worthwhile addition to anyones pack who carries material to start fires and I may even take and cut up my Tinder-on-a-Rope into four pieces (a little of this goes a long way) and add a little less than half an ounce to my pack to have a reliable tinder like Tinder-on-a-Rope in my pack.

Nothing fancy, but reliably useful. Tinder on a Rope is precisely what the name suggests and is nice to have as a backup for fire starting.

I received these matches as a gift from Trailspace for being a Reviewer of the Month.

Conditions:
I’ve used the Tinder on a Rope several times this past year, in a variety of conditions ranging from cold, damp spring to hot, humid summer, with success each time. The worst (i.e. wettest) conditions I used it in was after a seemingly out-of-nowhere summer rainstorm snuck up on us in the latter part of the afternoon while on a three-day canoeing trip. The island we stayed on that night had very little dry tinder, so the Tinder on a Rope came in handy and the fire lit in no time. That fire wasn’t absolutely necessary for cooking, but the warmth it provided and the ability to dry out some of our wet clothes was welcomed. 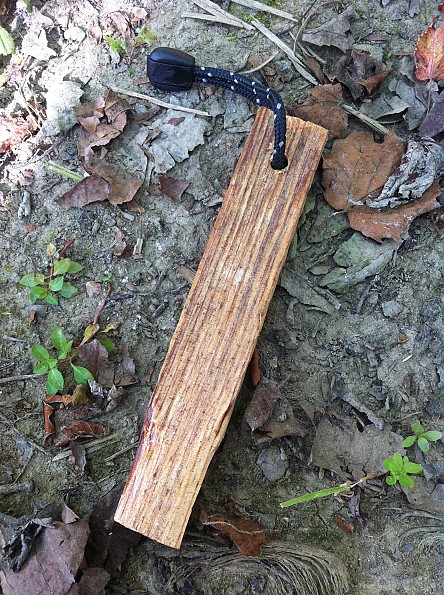 Usage:
If you can whittle a stick and light a match, you can figure this out. The Tinder on a Rope is easily shaved using a sharp knife. I’ve used a few different knives with varying degrees of sharpness and all worked just fine. 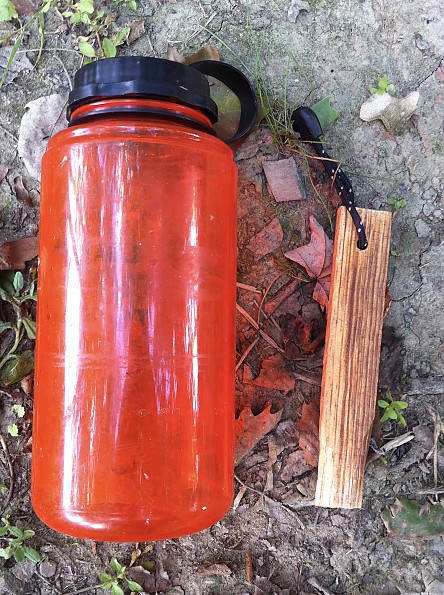 Construction and Functionality:
A piece of wood from the stump of a pine tree with a high resin content (up to 80% resin claims the manufacturer), make the Tinder on a Rope useful when trying to get a fire started, particularly in wet conditions when dry tinder may be hard to come by.

The one aspect of the Tinder on a Rope that I’ve had issue with is the rope’s clasp, which can come undone or easily broken since it is a small piece of plastic affixed to a chunk of wood that otherwise does not need to be handled with care.

Once the plastic clasp broke I saw three potential options, 1) try to fix it; 2) remove the clasp and tie a knot in the rope; or 3) forget the rope altogether and just keep the tinder block. I chose the third option since the rope didn’t really add to the product's use or function for me. I realize some may use the rope to hang it on a pack or something similar, but the rope is not needed for my uses. 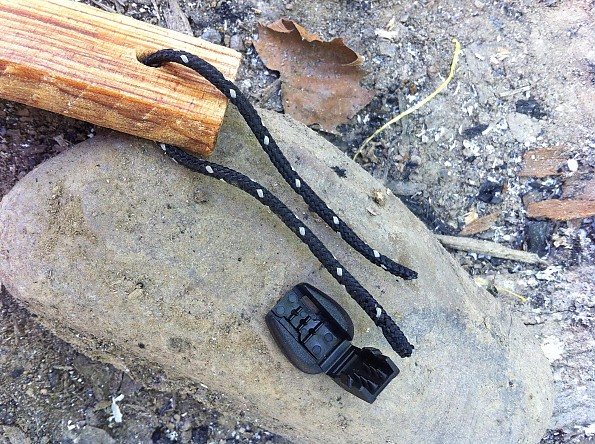 Great to have along on any camping trip, but don't depend on the flimsy hanging cord.

Got these as stocking stuffers for our scouts -- perfect to carry in your emergency gear, car, camping, etc. However the little plastic gizmo that holds the rope together for hanging didn't even last until our first trip, fell off when taking out of the box to look at them. Not really necessary as we then tied our own paracord on (making it a little longer as well). 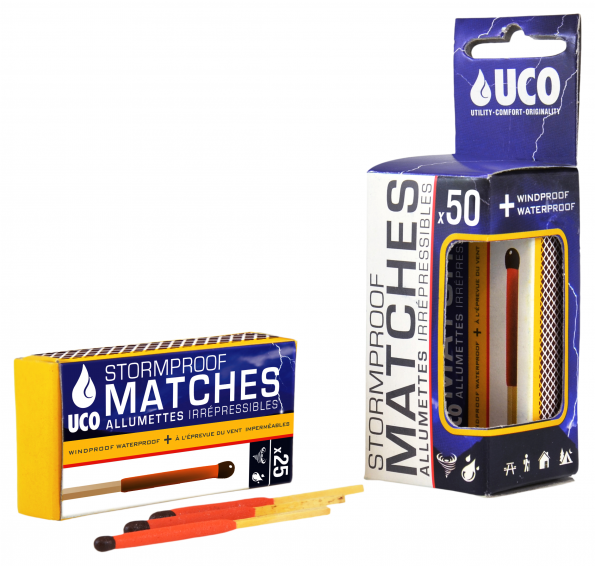 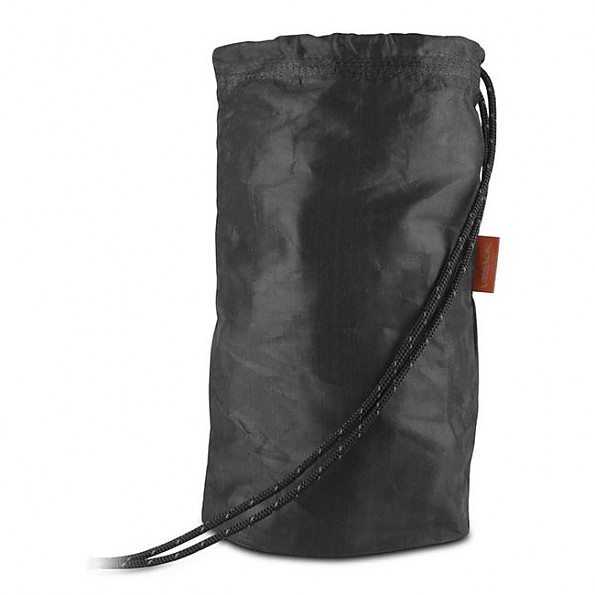 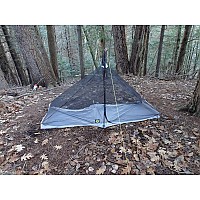