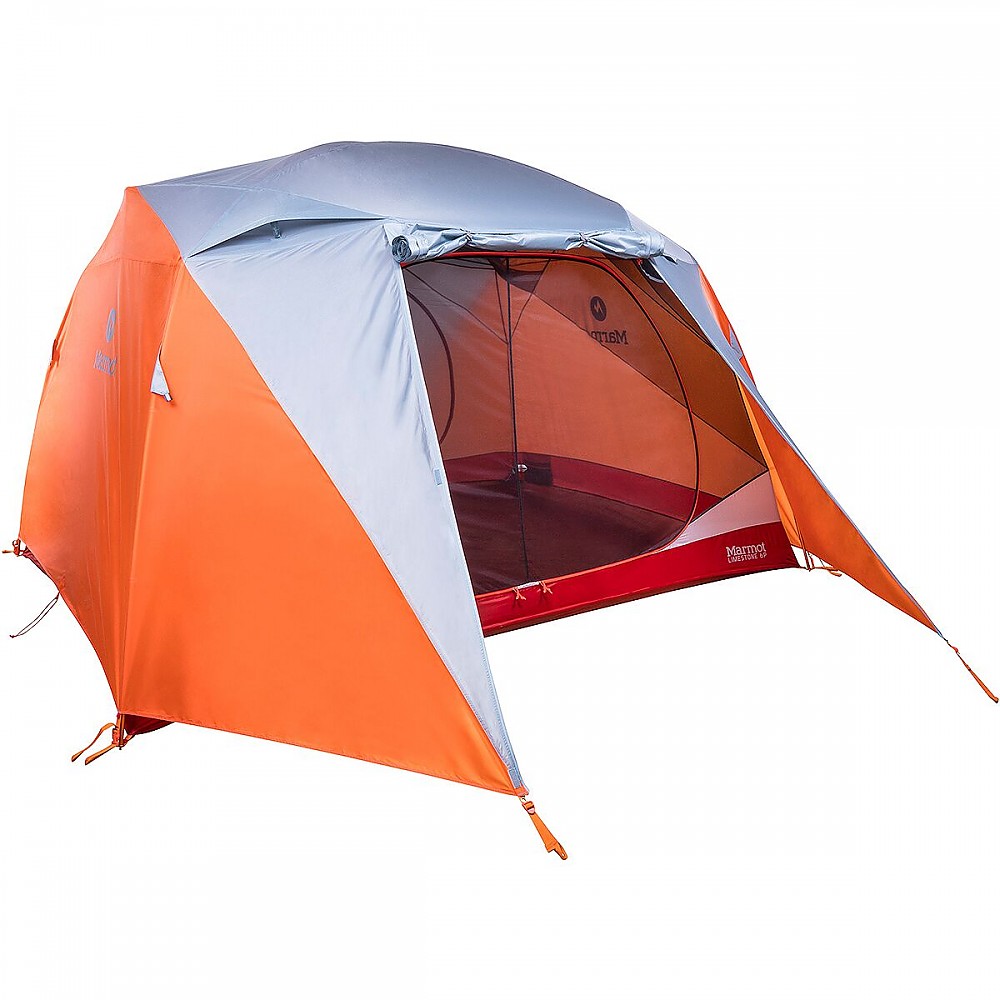 The six-person, four-season Limestone is basically a
big-brother version of the Limestone 4P tent, but with tad bit more space, a
weather-resistant construction, and a doormat to keep debris outside where it
belongs. It sets up fast and easy using the color-coded clip and DAC pole pitch
system. All seams are fully taped for a watertight seal. The canopy is made of 70
denier polyester taffeta and no-see-um mesh. The fly is made of 68 denier
polyester ripstop, and has an 1,800 mm water-resistant coating. The floor
features a hardy 150 denier nylon with a 3,000 mm waterproof coating. Comes
with tent repair kit, hanging pockets, and doormat. 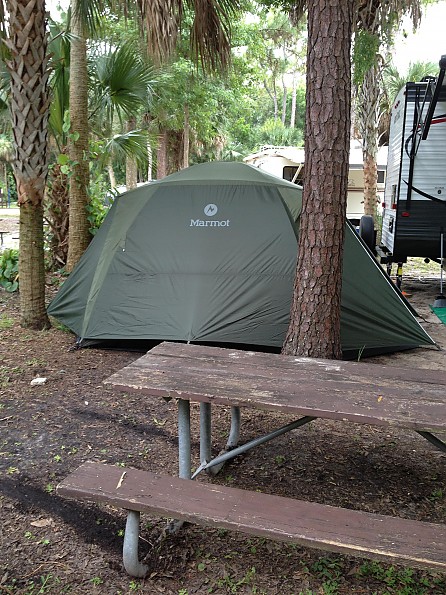 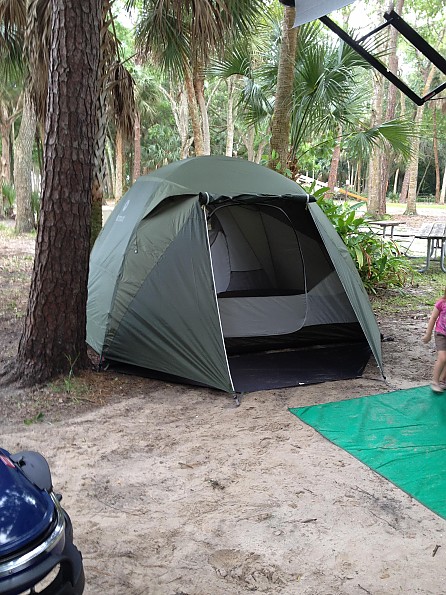 Aesthetics: I went with the green version, and it looked great. With or without the fly, very nice. My wife, who was hesitant about the purchase, often commented about how cool looking it was. Not important you say? Happy wife = Happy life.

Materials: All very quality. Compared to the competition, the Limestone is superior. In its thickness and waterproof-ness of floor, its durability of fly, and tent walls, in addition to stakes/poles.

Setting it up, I was really pleased with how solid the construction was. Also the bag was more than large enough. In fact I might try to find a smaller bag, especially if I want to take it backpacking someday.

Setup: Easy and fast (was assisted by my 6- and 3-year-old daughters)

Size: I'm 5'10" and could stand up with room to spare. I was looking for a tent big enough for me, the wife, and three small kids. Limestone 6 was perfect, and if we had to we could fit another person. We had a queen-size air mattress in there and room enough for at least a single mattress. The two poles that run along the top of the tent really do provide a roomy interior, almost vertical on the front and back walls.

Ventilation: A big consideration as I'm in Central Florida. I had the family on a weekend trip were it was 90% humidity, and 89/90 degrees during the middle of the day...so it felt like a sticky 95 degrees. The tent performed well. We had the fly off for a night and the fly on for a night, both comfortable...aided by a few fans.

Wife commented that she liked being able to look up at the trees, through the mesh. It was really a great view, but the fly on kept the brightness down in the morning, so I think we slept a bit longer. Very impressive all around.

Weather Resistant: I was secretly hoping it would rain, but no such luck. Other than being hot and humid, the weather was pretty nice. Unable to speak to its rain/wind resistance, but everything I've read says it's a bunker, which is important in this region.

Weight: OK, I admit that a 6-person tent will not be very light, especially one that is very durable. Still, 15 lbs almost necessitates an external frame, at least in my case where I'll be carrying most of the weight. I will split the poles and stakes up so someone else will carry those.  That's the plan anyway.

I would recommend you get the Limestone 6 Footprint. It's the same type of material as the free doormat used for the entrance side. Doormat was really nice by the way.

Welcome to Trailspace, John. Thanks for the Limestone review. I'd love to see some pics of yours.

Thanks for the pictures, John.

This tent excels as a family based tent. Its construction is very good and made of fine materials.

It is the configuration that really makes tents different, from one another. The Marmot Limestone has its entrances on the 10’ wider face and its length goes back only 8’4”. This does allow room to place such things as the cots, bedding or air mattresses towards the longer tent walls. This leaves the central area more accessible to the doorways without obstructing them, unless there are more than four campers.

While a lot of tent manufactures, REI and Marmot included, have saved a couple of manufacturing dollars, they have created a lot of negativity from campers who want their privacy — without closing the fly doorways. There is simply no way to block the mesh panels without the fly being on, and once it is up in warmer climes it can get stuffy, especially on hot days.

Although I’ve a good 6-person tent, a Kelty Trail Dome 6, I wanted one with a full coverage fly. We car-camp in the Mountain West’s national parks, monuments, forests and state parks. Been camping approximately 30 days each camping trip, for about 80 nights each year, and we stay approximately three nights at each campground. Sometimes we meet with the unexpected, such as late afternoon thunder storms, and desired better rain/wind protection.

We searched the internet and located tents from North Face, Big Agnes, two from Marmot, a tent from REI, and another one from Kelty, eliminating any tent that had fiberglass poles, as we have had poor experience with them.  I read most reviews for the strengths and weaknesses — then narrowed it down to REI and Marmot.

I was impressed by the geodesic design of the REI Base Camp 6, its number and use of the pre-bent aluminum alloy poles, and application of longer sleeves rather than clips.  But, on balance I was more swayed
by the Marmot LimeStone 6 tent’s width. Not the footprint for saving the floor, the actual living space of the tent. On weighing each, with sometimes conflicting factors, Marmot’s was the tent I chose for a family-sized one, for its better fit and configuration of its living quarters.

Both REI and Marmot each have traits that offset others, and they are very similar tents in most respects.   One has nylon flooring and the other uses polyester, but then Marmot has more water sealant on the floor, 3000mm vs. REI’s 1500 mm.  REI allows campers to open condensation vents from inside, while the
other has vents accessible only from its vestibules.

REI has more tent poles for support, but Marmot’s poles have greater strength and larger diameters, making both of them very wind and rain resistant. Marmot provides a stuff sack while REI has a backpack carry bag — but both probably rely on cars to take the tents to a campground.  And, both supply repair splints with their tents — as well as door mats.

It is the configuration of the two tents that really makes them different.  One, the Marmot LimeStone, has its its entrances on the 10’ wider faces.  Marmot’s length goes only 8’4”, which does allow room to place such things as bedding or mattresses towards the longer tent walls.  This leaves the central area more accessible to the doorways without obstructing them, unless there are more than four campers.

The REI tent actually places the entrance doors on its narrower 8’4” frontage. This usually lets the occupants place sleeping bags horizontally along the 10’5” sides.  Naturally, they use one of the longer tent-walls but it blocks the doorways when there are more than three occupants, or use air mattresses rather than narrow sleeping pads.

And REI’s inclusion of a rear “vestibule” really begs the question. It nominally has some 15 useable square feet; but, this rear vestibule is mostly useless due to its narrow space and the tent wall’s pitch. In reality it is a rainy day door flap, used to close the open mesh door in lieu of a closeable mesh panel. Or, at best, it is a doorway to be used when climbing over sleeping persons when nature calls at night.

That brings me to the single real “disadvantage” – something that could make a camper put off the purchase of any of these two very high end tents – a lack of privacy!  And it applies equally to each of these 6-person family tents – Marmot’s LimeStone and REI’s Base Camp.

Both have doors lacking closeable mesh panels that are found with lesser quality and lower priced tents.  While REI and Marmot may have saved a couple of manufacturing dollars, it has created a lot of negativity from campers who want their privacy — without closing the fly doorways. There is simply no way to block the mesh panels without the fly, and once it is on it can get stuffy, especially on hot days. It may be that in a backpacking base camp such nicety is not a quality a person seeks, but in a family tent, one that is used for car camping at many campgrounds, it is a necessity. Both the REI and Marmot designers made that one crucial mistake when they created these doorways.

They left out the fabric behind the mesh in the door areas and this eliminates space essential to one’s self.  And since there is no fabric, anyone outside can see inside the tent - uninhibited. That indicates you can’t change clothing or do other things that require solitude; it's just not there! That is, unless you have the flysheet on and lowered for full coverage; but that means no star-gazing.

Then there are those “windows” on both REI and Marmot tent flies.  While small, they really don’t do anything
for privacy because there is no way to close them off. And both are too undersized for observing the heavens! Dump them, and give us back the door closure panels!

All in all, despite these draw-backs, both the Marmot LimeStone 6P and REI BaseCamp 6 tents warrant a well deserved 4 stars.  If they would correct the privacy issues, these tents would shine at a 5 star rating. It was a hard choice, but I only prefer the Marmot tent because it has more convenient living arrangements.  But I still feel REI’s alternative is a sound investment for beginning small families, or camp in it for extended periods of time. 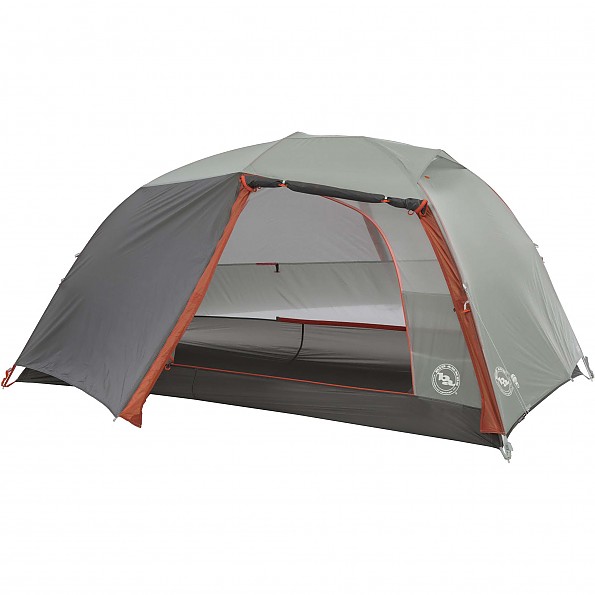