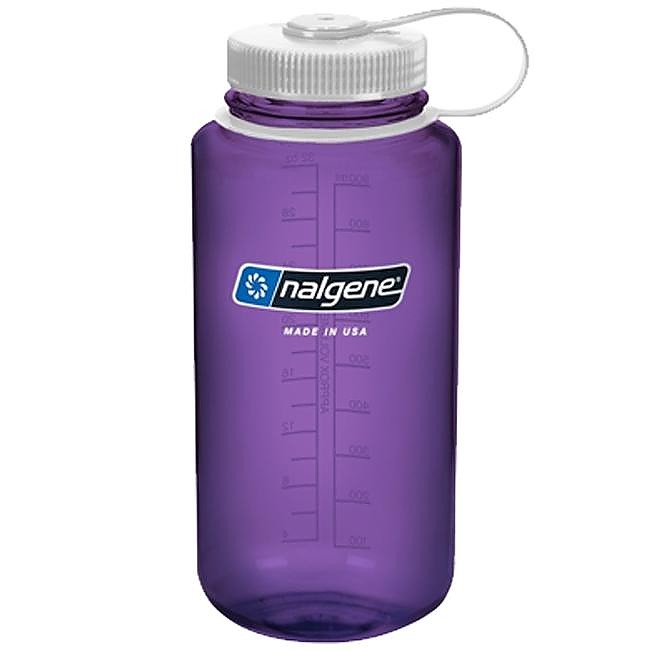 This is the only water bottle brand me and my family uses for everything. We have about 6 or 7 floating around the house. Saving the environment, we never buy bottled water anymore. This water bottle is compatible with my MSR water filter system.

I use this bottle hiking. I also have found another use for it! Before I go to bed when camping I fill it with boiling water and put it in the foot of my sleeping bag, instant heater that keeps me warm all night. Sometimes I lie on my side in my sleeping bag and put the warm bottle on my lumbar area of my back and it helps relieve tension and back pain after a long day of hiking.

I never go to work without it and my boys never leave home without one. 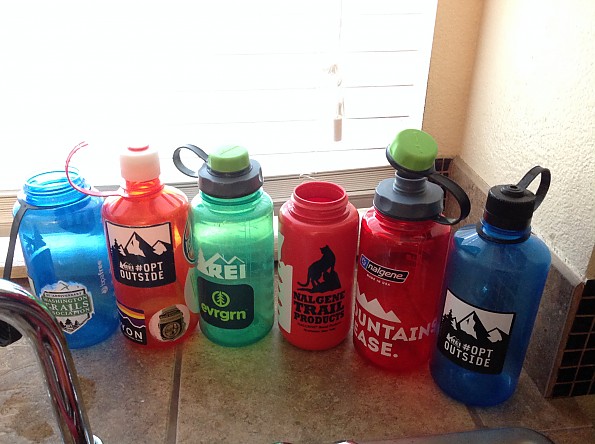 My family's collection of Nalgene bottles

Unless you are doing a Camelbak, 32oz is the largest volume water carrier you can get and Nalgene is top of the heap.

A solid bottle with a great cap to prevent leaks. Most bottles also come with a a graphic to show you how much water is left, important for hot days in the desert.

My only complaint is that the cap doesn't do so well with multiple trips through the dishwasher. A small complaint and easily rectified as you can buy replacement caps, but overall this is a workhorse of water systems.

I recently replaced all my ancient Lexan Nalgene bottles after reports about the effect of BPA. I hope BPA isn't too bad because I have been dumping boiling water into my Nalgene bottles for years. Nalgene's Lexan bottles have been a mainstay of mine for years. They are indestructible, don't impart any weird taste, are very easy to clean, and it's hard to lose the top because it is attached to the bottle.

The new bottles have the same wide mouth and the same attached cap. They are also made out of a hard clear plastic that can deal with hot water and freezing temperatures, and which does not appear to affect the taste of the water or other liquids it carries. I found that this bottle weighs somewhat more than a comparable Lexan bottle, and I have no idea whether this new material will last as well as Lexan.

The main competitor for bottles appears to be Camelbak. One of the Camelbak tops has a convenient spout that flips shut - but I don't think this can be used in cold weather as it's too narrow and looks like it would freeze. The more plain Camelbak tops both have a convenient hard plastic loop that could attach to a pack with a carabiner - but these tops are still not attached to the bottle when unscrewed.

A nice, safe substitute for my old favorite. I can't give it five stars until I thoroughly abuse this bottle with boiling water and years of impact on the rocks.

Best water bottle on the market. For daily drinking or hiking, camping, or picnicking you can't go wrong.

I use two on backpacking trips. I have never had a problem with carrying them. Other bottles seem to fall out of my pack. But not these, and the wide mouth fits any pump style system.

I use two of them to even my pack load out. I have dropped one off a cliff about 30 or more feet. And it did't break! I've busted Camelbak bottles dropping them at home.

Great strong water bottles. Nearly indestructible. Love them for backpacking and just about anything.

I have several of the wide and narrow mouth bottles. I think these things are indestructible! I even ran over one with my jeep and saw no damage at all. Well worth the $10!

These Nalgene water bottles are the best I have ever used they are tough & durable. I have dropped them down stairs on rocks they have let them freeze by accident in the winter and in the freezer for that ice cold drink on the trail I have thawed them out by the fire. All with no repercussions of the structural integrity of the bottle there just like a Timex “they tack a licking but keep on ticking“ if you remember that commercial. These are great for drinking out of, water storage, drink mix’s and even dry storage. You cant beet the usefulness of these bottles.

I would definitely recommend this to a friend.