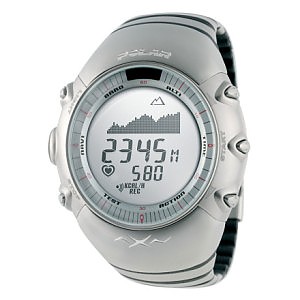 This is an extremely useful bit of gear. I bought the AXN 700 several years ago as I was doing lots of hiking at altitude, and I liked the fact that it would give me both a way to measure my exertion (through heart rate) as well as my progress (through the altimeter).

As you would expect from a Polar heart rate monitor, the heart rate and training functions work solidly. The altimeter works reasonably well, about as well as my old Suunto Vector. The compass is iffy at best but these things often are.

As a gear nerd, I find that the coolest thing about the watch is data transfer to a PC -- not only can you track your heart rate, you can see how it changed over time, correlated with altitude. *Very* cool!

The PC interface also lets you transfer altimeter calibration points to the AXN, very useful for when you know where you will be and can calibrate.

1. The watch is gigantic. It's got a big face but it's also very very thick. When you're wearing this, everyone will know it. On the bright side, the case is nice enough so that it doesn't look like your usual cheesy exercise watch. (It's noticeably thicker than my 1999-era Suunto Vector.)

2. The pressure sensor can operate as *either* a barometer *or* an altimeter, but not both at once. The old Vector offered both function simultaneously, and you were expected to be smart enough to know that if you were climbing a lot, duh, the barometer would be dropping. There was also a nice feature on the Vector that shower the pressure trend over the last 6 hours. If you're like me, when you get to camp, there are enough things to do to forget about switching pressure sensor modes, one of the big advantages of the pressure sensor -- watching weather fronts -- goes away.

3. The PC software is Windows-only and, equally important, the data is Polar-proprietary. For the most part, this isn't a big deal, but if you want to do *anything* with your data other than leave it in Polar's software, this is really annoying. And I've found the software to be flaky at best. (Gripe: Polar now offers a web service but there's no way to get the data from the old PC software onto their web service!)

4. The menu system is about as good as you could hope for but it IS a multifunction watch and so the menus are deep and complicated and hard to follow.

All that being said, I found the AXN700 to be a great hiking and training companion. Alas, the gear gods have taken it away from me, and I can't justify that sort of cash twice... but I definitely miss it.

That price is pretty much what I paid. Because I live in Finland and Polar is Finnish company too, so I suppose that Polar-watches must be cheaper here. That AXN700 is pretty good of all specifies, but one thing is worse. Lowest temperature level of activity is -20c degrees, so that quality as AXN700 is that level should be like -50. Here where I live is more than one month per year below than -20c, that kind of extreme watch should be also work in extreme conditions.