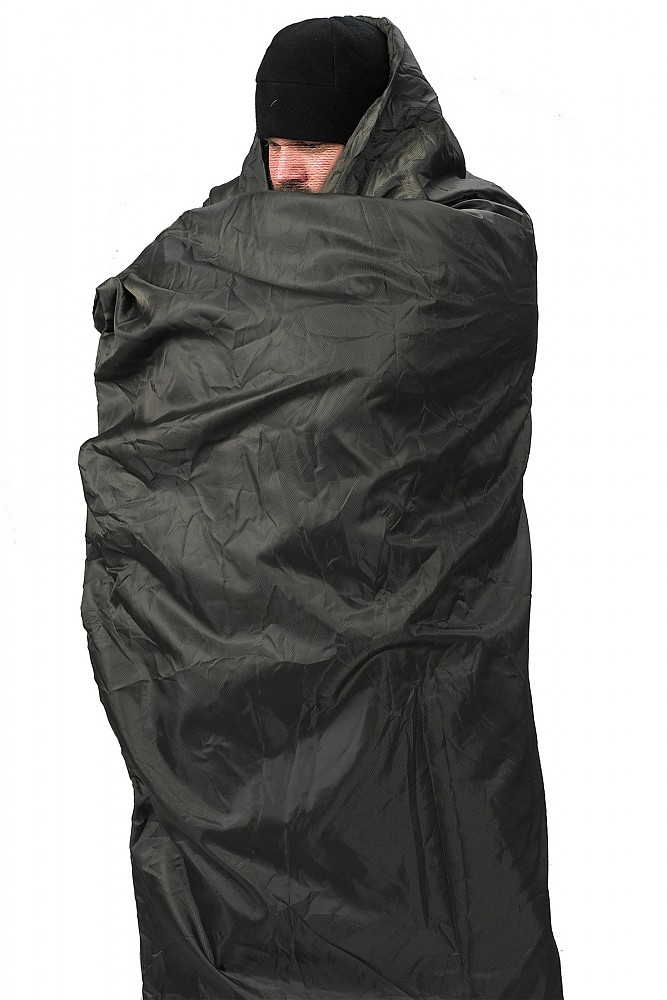 A lightweight quilt for around 50deg F. One side is waterproof-breathable and the other is a nice taffeta fabric that is quite soft and comfortable. It is about the same price as a MilSpec poncho liner (woobie) but pretty much better in every way. Lighter, more compressible, water resistant, just as warm.

I have used my Jungle Blanket and its close cousin the Snugpak Poncho Liner countless times. I use both far more often than I do actual sleeping bags anymore. Both are really versatile and far superior to the MilSpec poncho liner or in my opinion a warm weather sleeping bag.

The outer shell is a soft but waterproof breathable nylon ripstop which is great. Besides being able to shed a light rain it means you can boost your temp by throwing a space blanket over top. This combo reflects your body heat back and traps air but also collects the water your body respirates during the night. You can do this with any blanket or sleeping bag but without the waterproof outer layer you end up soaked.

You can also add the blanket to boost the warmth of a sleeping bag. This works even better if you have two people. Just throw the Jungle blanket over both people and their sleeping bags and you end up sharing warmth between you. Works great as a quilt in a hammock as well.

Snugpak also makes a poncho liner as well. It is essentially the same product but it has a hood and kinda sleeves so you can wear it like a poncho. I especially love this as it is just as warm, only slightly heavier, and can replace me packing a jacket. It's also real nice on cold mornings to just throw the blanket you are already under over your head and be wearing a jacket rather than getting out and exposed to put on a cold jacket from your backpack.

I have used this countless times over the last four years.

This blanket is excellent for either an impromptu overnighter on the couch at an in-laws, as an enhancement to your existing sleep system on a particularly cool night, or just for snuggling with a good book on a winter's evening. As an added bonus, it also has anti-bacterial and anti-microbial properties. Rated for temperatures down to around 40 degrees.

I bought this as an enhancement to my minimalist "cool weather" sleep system for those particularly cool nights... and it works. It has since grown to be my around the house go-to comfort/blanket for those infrequent cold fall nights. I now find it indispensable as I get older as a chill settles in more often than not, and this thing really works.

My only complaint is that as a larger person, and given how light the product is, it is sometimes difficult to stay under its 76"x64" size as I am an "active" sleeper. However, I can definitely recommend this product to any and everyone. Its uses are only limited by the scope of your imagination, and how often you get cold.

I have multiple 100% wool blankets, several Coleman stadium blankets, and a myriad of various fabric "throws"...and this beats them all, in every circumstance, hands down.

I concur! Thanks for the comprehensive reviews.

I bought this as a slightly warmer alternative to the standard military poncho liner "wooble" I usually carry for summer hikes. This is a little smaller, but is also about 8 ounces lighter than the poncho liner in a stuff sack.

First test was on a cold, dreary night in my living room (smirk). I pulled the Snugpak out of its storage bag, unrolled it, and pulled it over me while watching TV. I immediately noticed it was warm—noticeably warmer than a poncho liner I usually keep handy.

Second test, outside by the fire pit on a chilly, misty 34º night. This blanket is a lot more breeze resistant than any poncho liner I've ever owned.

Third test—stuffing it. Some people might always roll their sleeping bag, down coat, jungle blanket, camp pillow etc. I usually just stuff my stuff. The Jungle Blanket stuffs perfectly into its stuff sack without worrying about any OCD roll up method. I think it has replaced my wooble!

Of note: The stuff sack uses the compression straps across the drawstring opening of the bag. While this design is likely meant to keep weight low, it's a bit cumbersome and clumsy. If the bag had a removable top cap (like other brands), it would allow for more vertical compression. Size matters!

I had read several reviews before purchasing and some complained about the stitching and batting. Mine is double stitched around the edges (new feature?) and doesn't seem to have a single flaw in construction. This will have to be a test of time, but so far, not a single issue.

I did see that Snugpak at one time may have offered an XL version. Again—Size matters! Their product distribution in the U.S. is limited, and I could find no further details other than the listing. A few phone calls to "suggested retailers" was less than successful, but I would love to have that little extra length...if I can find one!

Awesome alternative to a sleeping bag! Weighs nothing, compresses small.

We started hammock camping this season and I am usually a hot sleeper anyway, so I have been looking for something not quite as heavy as my Cat's Meow bag and at the same time, something warm and taking up less space than the sleeping bag in my pack.

I was reading reviews on the Sea to Summit liners on this site and someone mentioned this Jungle Blanket in their review.

I purchased it on Amazon and was able to take it with me on a long hike in March 2016.

I LOVE IT! Our nights were down to about 45 degrees and I was perfectly warm with just this and my base layer of clothing (and an under quilt). I was not cold whatsoever. I personally sleep hot so I feel that I would even be warm in this in a bit colder temperature possibly down to 40 degrees or so.

It comes with an nice compression bag and I was able to get this down to about a 5x5 size to fit in my pack.

It is water resistant (not waterproof) and that was put to the test when we encountered a night of thunderstorms while in the hammocks. One of the tarps was holding water and the wind lifted it, pouring cold water into my hammock and onto this blanket. It resisted fine (as did my hammock) and after shaking it off I was nice and dry again.

Highly recommended as a sleeping bag alternative and even a couch throw.

It did exactly what I wanted it to. It provided a small package and a nice, big, perfect temp and performance item. It can be kept in the car for a blanket to lie on or watch the stars or used sitting around on those chilly nights around the campfire or even by the fireplace. The uses are endless.

I had seen the previous post and I already am a fan of Snugpak and own the jungle bag. Well, I found one for $24.50 and to be honest just needed a temporary blanket for my bed, so why not?

It was instant love! It's so comfortable and I knew I had to get it up to the cabin and as always we all arranged to go up during or while still happening a meteor shower. I used this around the campfires at night or let some others use it a blanket most every night and after just following the washing instructions it's back on my bed.

For $24.50 it's hard to go wrong, and with all its potential uses it's hard not to buy! I'm sure with this blanket and my Jungle bag I've extended my camping season this year, so it's definitely proven its worth to me. 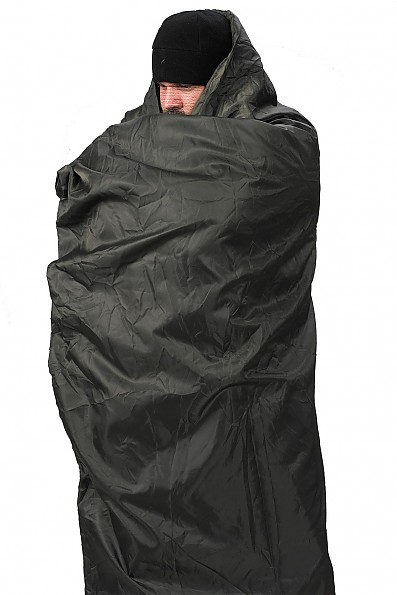 Trailspace's community of gear reviewers has field-tested and rated the top quilts.