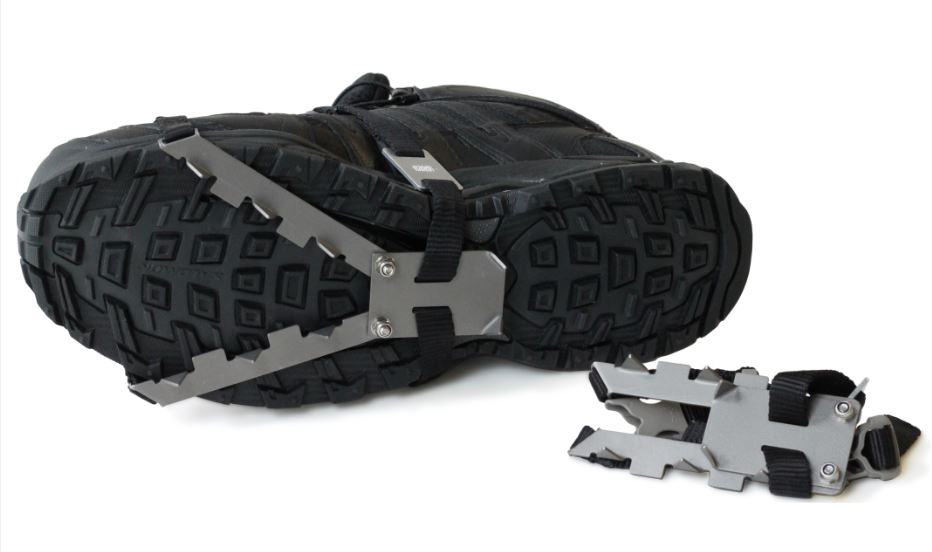 The Vargo Pocket Cleats are a front foot traction option for light hiking and running. I found that they are best for trail running on level terrain or for those interested in a lightweight backup traction device.

I had the opportunity to test the Vargo Pocket cleats on the back roads and trails of the White Mountain region of New Hampshire. I found them to be well made and an innovative use of titanium. However, they were not well suited for all applications I tested them in.

Ease of Use: The design of the pocket cleats is fairly easy to work with. Vargo is clear that these cleats will only work with shoes that have an hour glass shape which is typical in running and light hiking shoes. This is because the back strap is designed to fit at the narrowest section of the shoe so that when tightened it will prevent the foot from sliding out of the cleat. 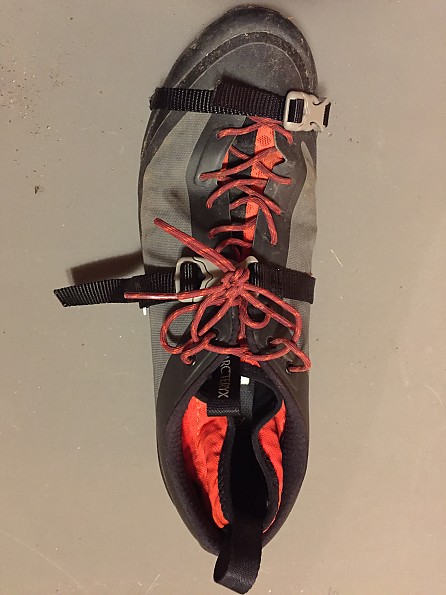 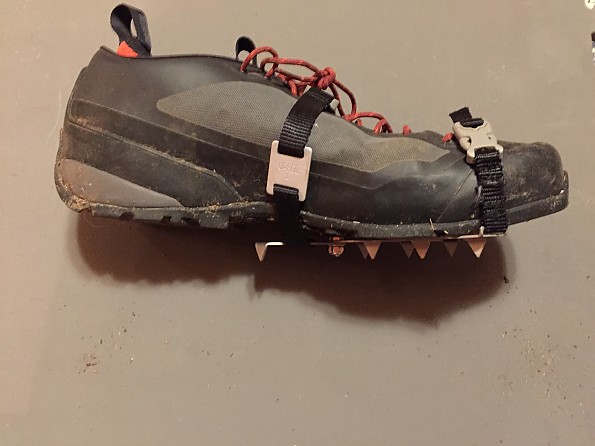 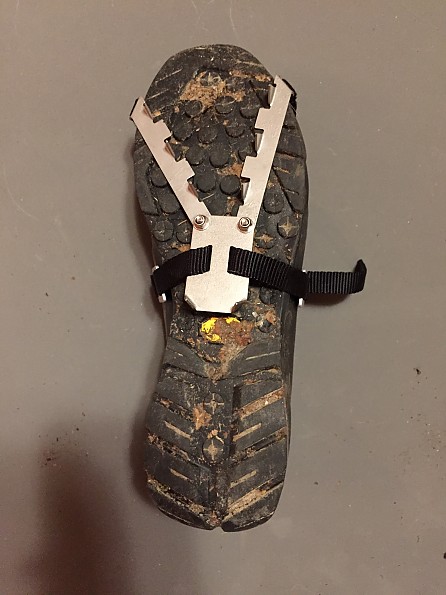 The first fitting on any pair of shoes takes a little time. This is because the straps need to be adjusted to ensure proper placement. I found this process to be a weak point in the design of these cleats. The strap was difficult to pull through the buckles while attached to the shoes which meant I needed to buckle and unbuckle the cleat multiple times to fine tune the fit.

I also struggled with the exact placement of the cleat on the sole of my shoes. It is vital that the back of the cleat sit centered on the arch of the foot. Based on shoe design this was often a challenge.

The design relies on proper snugness and positioning of the cleat in order to maintain a stable platform. I found that the slightest deviation from a perfect fit caused a few problems down the road.

The first was that if the front strap was not tight enough the cleats would spread resulting is a side-to-side movement of your foot. Even if I tightened this strap correctly at first, there was the possibility of the front strap loosening over time because of the twisting motions that occur during hiking.

The second issue caused by improper fit was that it was possible to "walk out" of these cleats. There is no heel strap which means that if the back strap is not perfectly placed and tightened on the middle of the foot you can slip out of the cleat while walking up hill. This did not happen often but it did happen more than once, which is notable.

A positive point when it came to the initial fitting as well as general use was that each strap was labeled either R or L to help identify which foot to place the cleat on. This is something that I appreciated because companies often ignore these small details. 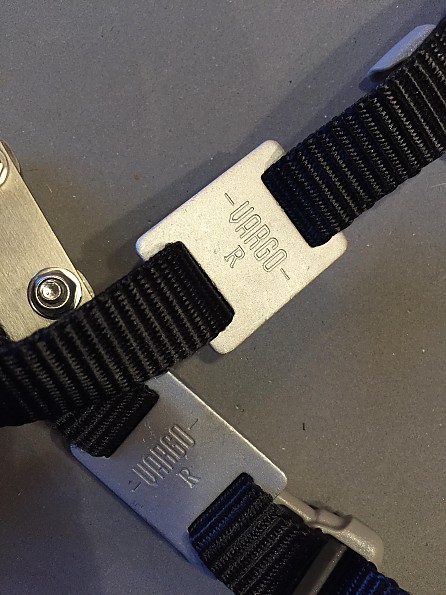 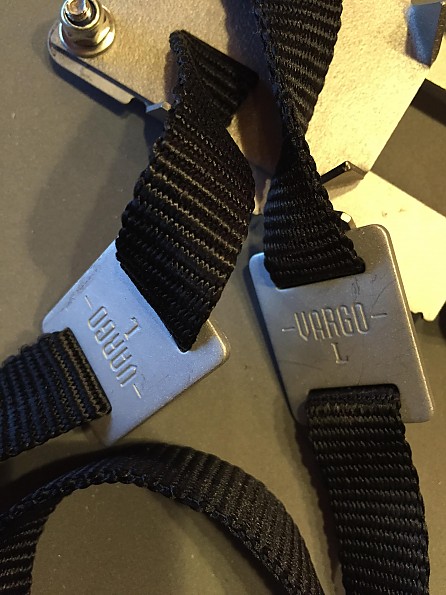 Features: The most noteworthy feature of these cleats is the use of titanium to reduce weight. They came in under 4 ounces for the pair and it is no exaggeration to say that the nylon straps and plastic buckles make up the majority of the weight.

Another key feature is their compact size and folding design. The arms of the cleats fold back and both cleats fit neatly inside a nylon pouch that is roughly the same footprint as an iPhone 4. 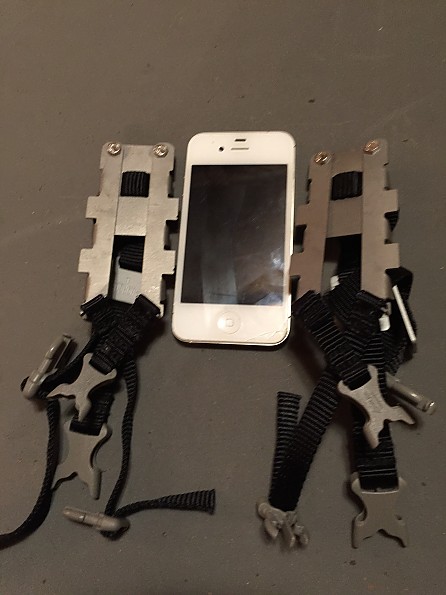 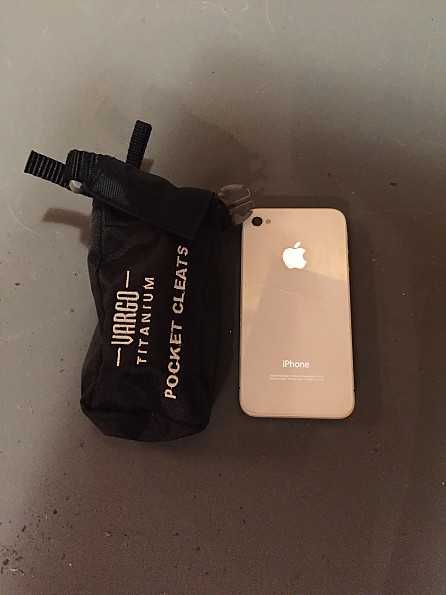 Since they were so light, I did not mind carrying them whenever conditions may have meant coming across ice and I wanted a backup to my primary traction device.

Construction & Durability: The pocket cleats are very well made. The stitching in the nylon straps has held up well and shown an appropriate amount of wear compared to use and the buckles have held up nicely even after being stepped on more than once.

The titanium portion of the cleats defied my expectations for holding up against mixed conditions like ice, snow, rocks, and roots. I did encounter a situation where I spent some time post-holing in knee deep snow that caused a slight bend in one of the cleats. Since I was in conditions outside of the recommended use and I was able to easily re-form the cleat, I do not feel this was a weakness of the product.

It is worth noting that I never experienced any accumulation of snow under my feet while using these cleats. For those unfamiliar with this situation, it is possible that during winter travel while wearing spikes (or snowshoes) that the force of each step will pack snow into the traction device reducing its effectiveness. I believe the minimal design and numerous, well placed, spikes helped prevent this build up.

Conditions: I tested the cleats during the later part of the winter in the White Mountains of New Hampshire. The terrain varied from level woods trails and dirt roads to steep hiking trails. This time of year consistently has snow and ice covered trails eventually melting enough to throw exposed rocks and roots into the mix.

I found the cleats performed best on level terrain found on snow covered dirt road. Even though I am not a runner, I did have the opportunity to jog on my dirt road. I found that the spikes performed rather well during this because the front of my foot landed first, allowing the traction to bite into the snow.

However, once I ventured off this type of surface I began to run into some trouble. On steep inclines with a lot of twists in which my foot needed to move side-to-side I would end up loosening the front strap. This would cause the issue I mentioned previously in which my foot would slide on the cleats. I also found that once the loosening of the straps started I ran the risk of walking out of the cleat. Even though I only walked out of the cleat twice it caused a level of doubt to settle in my mind which caused my focus to shift from enjoying the my hikes to looking at my to feet make sure I wasn't falling out of my traction device.

On the downhill trip I found that the lack of heel traction was a little unnerving. When my heel hit the ice/snow first I slid until the front of my foot hit the ground. I eventually got used to this and, for the most part, was able to safely walk downhill. However, every once in a while I would hit an exceptionally slippery section which would catch me off guard. Like the uphill, this would plant a seed of doubt in my mind that diverted my attention from the enjoyment of the hike to whether my traction device was working or not.

On level terrain the lack of heel traction was less of an issue. This is mitigated even more when I adjusted my stride to focus primarily on the front foot.

I gave the Pocket Cleats 3.5 stars because of the innovative use of titanium, compact design, and the impressively light weight yet durable construction. However, the issues I encountered on hiking trails could not be ignored in the rating. In my opinion, the main focus of a traction device is to provide peace-of-mind stability on slippery terrain and I felt that the pocket cleats did not meet this focus as well as I would have liked.

While I would not use these as my primary traction device, they are so light and compact that I would not mind carrying them as a backup system. I feel comfortable recommending these to people who stick to level terrain, are primarily trail/road running, or are looking for a lightweight secondary traction device.

Source: received for testing via the Trailspace Review Corps (Sample provided by Vargo for testing and review)

Thanks for the review, Jim! Seems like a good option for central NC. We don't get ice or snow too much, but when we do, I just hate to stay inside. I gotta get my run in. If Vargo could have fuller coverage like Yaktrax, then it'd be a winner.

From my understanding, are these meant to be primarily for trail running in winter conditions? The spikes look beefy for that. I think they might be helpful when crossing over above tree line to valley on longer excursions where weight considerations are big.

Great review. I forgot to mention that!

Thanks for the review, Jim. These sound like a good option for some of my winter running, especially when I'm on the fence about bringing my Yaktrax or not.

Stylistically, they look like a traditional instep crampon with an addition for the front of the foot. If you have every used an instep crampon, how do they compare?