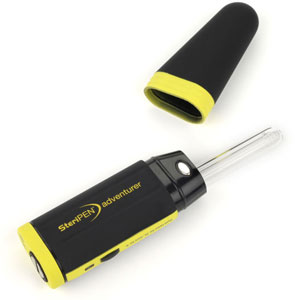 Want to purify questionable water from a lake, stream, or Third World tap, while only adding four ounces (110 grams) to your pack weight? How about 99.99-percent purifying effectiveness without pumping, chemicals, or waiting for water to boil? The SteriPEN Adventurer, the newest handheld water purifier from Hydro-Photon, makers of the original SteriPEN, is lightweight, fast, and easy to use.

Like the original SteriPEN, but at less than half its weight, the SteriPEN Adventurer uses ultraviolet light to destroy the DNA of waterborne microbes, rendering them unable to reproduce and make you sick. It kills 99.99 percent of all viruses, bacteria, and protozoa, such as giardia and cryptosporidium; household germs like Bird Flu, influenzas, E. coli, salmonella, staph, and strep; and bio-terror weapons like botulism, cholera, smallpox, and typhoid. It also eliminates travel risks that can cause diarrhea, dysentery, hepatitis, and Legionnaires’ disease and ruin your treks and travels.

In addition to being lightweight, the Adventurer is simple to use. Push a button, place the lamp in the water, and stir (for uniform treatment) until the automatic-sensor-light turns green. And it’s fast. It purifies 16 ounces of water in 48 seconds and a liter in 90 seconds. Take the lamp out of the water too early and the purifier will warn you with a red light that the water isn’t ready to drink. The Adventurer’s temperature sensor also adapts the purifier to colder water temperatures, automatically increasing its processing time.

Going off the grid for an extended period? For added versatility the Adventurer has an optional carrying case with integrated solar recharger panel on its cover that can charge two CR123 rechargeable batteries. “Missionaries told us, ‘I can’t get any double-A’s. What can you do for me?’” said SteriPEN president, Ed Volkwein.

In addition to solar power, the carrying case can be plugged into a cigarette lighter. It also has space inside its foam-lined interior to store extra batteries, along with the Adventurer. An additional benefit is the ability to recharge CR123 photo batteries for a camera.

Using its rechargeable batteries (it also works with non-rechargeables), the Adventurer will purify 1,250 gallons of water, at a cost of only 10 cents per gallon of water.

The SteriPEN Adventurer (with two rechargeable CR123 batteries included) will retail for $129 and will be available in fall of 2006. The carrying case will be sold separately.