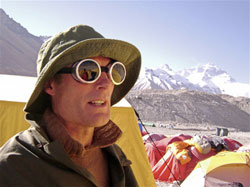 Conrad Anker in period gear at Everest Base Camp.

Did George Mallory and Andrew “Sandy” Irvine summit Everest in 1924—three decades before Edmund Hillary and Tenzing Norgay’s 1953 summit—before disappearing on the mountain? Mountaineer Conrad Anker’s 1999 discovery of Mallory’s body at 26,760 feet on the north side of Everest didn’t resolve that legendary question. In fact the quest’s few, but tantalizing, revelations simply reopened the debate.

That debate has deepened with the help of modern investigative techniques, like forensic tests on Mallory’s clothing that showed the climbers were adequately outfitted for high altitude conditions. According to textile experts, Mallory and Irvine could have summited in their clothes, although the garments probably would have been insufficient for surviving a bivouac.

The latest chapter in the Mallory-Irvine mystery is being written this month. Anker and British climber Leo Houlding recently arrived at Everest Base Camp, each outfitted with replica 1924 high altitude clothing that they plan to test at various points during their ascent of the mountain. Anker and Houlding’s outfits, individually made for each climber, include felt-bound leather boots with alpine nails, cotton long johns, silk shirts, hand-knitted wooly jumpers, a Burberry top suit, coat, and trousers, glass goggles, leather mask, and rabbit fur-lined leather motorcycling helmets (see the full list at right).

As part of Altitude Everest Expedition 2007 Anker and Houlding will test the durability of their replica clothing and equipment and attempt to reconstruct Mallory and Irvine’s final hours, including an attempt of the Second Step, a 100-foot cliff that defied every climber after Mallory for half a century (climbers now use a ladder bolted to the headwall by a 1975 Chinese team). Whether or not Mallory or Irvine could have climbed the Second Step is a major contention in the historical debate.

This will be Anker’s second effort on the Second Step. In 1999 he nearly free-climbed the step’s 15-feet crux pitch, leaving his pack and oxygen at the base. Potentially, it could be a first (or second) if done in period gear.

Last year climber Graham Hoyland (great nephew of Howard Somervell, one of Mallory’s climbing companions) also wore and tested a set of replica clothing on Everest over two days. While the clothing, made of gabardine, wool, cotton, and silk, was the lightest ever used on Everest, the natural layers reportedly trapped air well and were highly durable, water-resistant, and breathable. Hoyland also found the made-to-fit clothing more comfortable with a better range of motion than contemporary pre-sized clothing options (read the BBC News article).

You can follow the Altitude Everest Expedition’s attempt to solve the Mallory-Irvine mystery at www.ueverest.com. Or catch the documentary film that will be released in 2008.