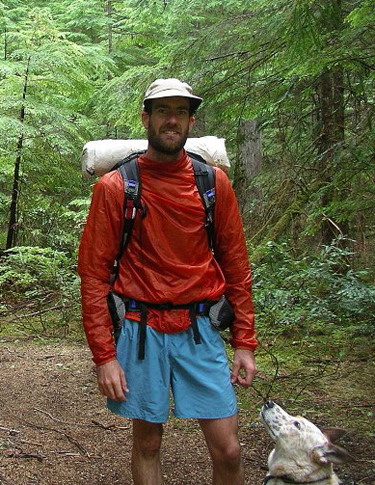 Brian Frankle on the Idaho Centennial Trail in 2008, with a prototype of the Ohm pack he introduced in 2009. (Credit: Brian Frankle)

Some people have a hiking habit. Brian Frankle has a hiking life.

Frankle builds backpacks so he can take long hikes. On long hikes, he finds ways to build better backpacks.

Frankle's ULA-Equipment essentially goes out of business every fall, when he shuts down his garage-based backpack factory in Logan, Utah, and hits the trail, typically for weeks or months along little-known routes like Utah's Hayduke Trail or Idaho's Centennial Trail.

Then it's back to the sewing machines.

"Basically, from the day that I reopen in November until all the way to the day that I close, it’s full-on," Frankle says. "I’m in here 10 to 12 hours a day, seven days a week."

Sounds like a crazy workload, but Frankle's grown into it over the decade since he completed the Pacific Crest Trail in 1999. He started ULA-Equipment in 2001 to bridge a gap: commercially built backpacks were too heavy, and ultra-light packs were too bare-bones. While the first pack he sold commercially — the P1 — was a frameless ultra-lighter, the second would realize his vision.

That pack was the P2, which used lightweight metal stays to transfer weight from the shoulders to the hips and weighed in at 2.5 pounds (40 ounces). It eventually became the Catalyst, Frankle's most popular model to date. Smaller models like the Conduit, Circuit and all-new Ohm appeal to smaller segments of the lightweight-backpacking crowd. 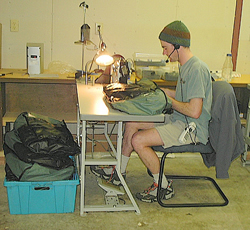 Frankle sews a pack in his Logan, Utah, shop, while wearing a headset to talk to customers. (Credit: Brian Frankle)

Frankle and a staff of four sew every ULA pack in a converted three-car garage behind his home in Logan. In the early days, when Frankle did all the sewing himself, the only way to get a ULA pack was to order one through his Web site — and wait.

It wasn't unusual for weeks and months to separate order from delivery. Hikers kept coming, though, because Frankle had a knack for creating packs that did everything the commercial packs did at half the weight. He also crafted little innovations like hipbelt pockets that have become ubiquitous on commercial packs.

These days, though, you can visit ULA-Equipment.com and see "in stock" on most ULA packs. Frankle has three dedicated pack-builders and a customer service specialist (a PCT through-hiker, naturally.) He says most packs ship within a day of the order being placed, unless he runs out of certain supplies (such issues have created a two-week backlog for his new Ohm pack). At peak efficiency his team can move 80 packs a week, Frankle says. Three outfitters along the Appalachian Trail sell ULA packs, but most of his sales—about a thousand products a year, he says—happen online.

The product-ordering page at ULA-Equipment.com is a marvel when you consider this is a business run in a guy's garage. Say you're interested in the Catalyst pack. You can select from four pack sizes and five waist-belt sizes. Then you can pick from a half-dozen extras, each click telling how much it adds to the price and weight (for $15, Frankle will embroider your trail name onto the pack).

Each individual product page includes a link showing how to size a ULA pack by measuring the distance from hip crest to seventh vertebrae, plus links to user reviews and an in-depth FAQ explaining what the pack does and doesn't do. There's also a pop-up window with zoomable 360-degree views of the pack's exterior. The view will get even better in mid-March, when Frankle plans to launch a major upgrade of the Web site with more trail-worn advice for using his gear.

ULA packs have an abundance of options, but they can't defy the laws of nature. The human body comes in too many shapes and sizes to please everybody. Packs are like shoes: all features are secondary to fit. 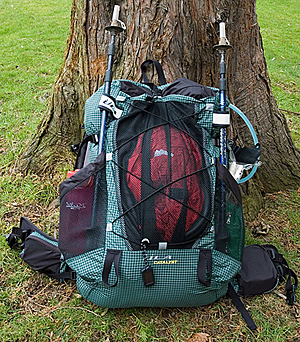 Heavier packs have built-in frames to transfer pack weight from the shoulders to the hips. The lightest packs have no frames at all and depend on expert packing to distribute a load comfortably.

The Catalyst uses aluminum stays to stiffen the pack and redistribute the load. At a shade under 3 pounds, it's not ultra-light by any means, but it can haul the load of far heavier packs. The price is reasonable at $235 (and remarkable considering it's not sewn in a Southeast Asian sweatshop).

The rest of ULA's line (the Circuit, Conduit, and Ohm) targets ounce-slashing backpackers who are determined to go lighter. These packs use a U-shaped carbon-fiber rod to shift the load, though some ULA owners go frameless.

Frankle also sells accessories like a water filter, pack covers, and a "potty trowel" that looks like an ice ax but has been renamed in defiance of alpinists who complained it wasn't heavy-duty enough for mountain-climbing duties.

Dealing with Frankle offers frequent reminders that his day has only 24 hours like the rest of ours. E-mails might go unanswered for days, and he takes calls at his shop only three days a week. But if you make the call, the guy selling you the pack is likely to answer the phone and help you figure out what you need. Try that with The North Face.

I trolled the Web for ULA pack owners and came across the journal (www.postholer.com/ellie) of Ellie Thomas of Wilton, Connecticut, who is planning to through-hike the Continental Divide Trail this summer. An early journal entry notes that she's ordered a ULA Conduit and is still awaiting a response from a couple e-mails she sent. How did things turn out?

"I tried the ULA Conduit for the CDT," she told me via e-mail. "It was a little too small, and I wanted more of a hip belt since I carry the weight largely on my hips.  I received the Conduit, called Brian, and he picked up the phone on the second ring. We discussed the pack, my needs, and settled on the Circuit.  I sent back the Conduit, and was immediately credited. 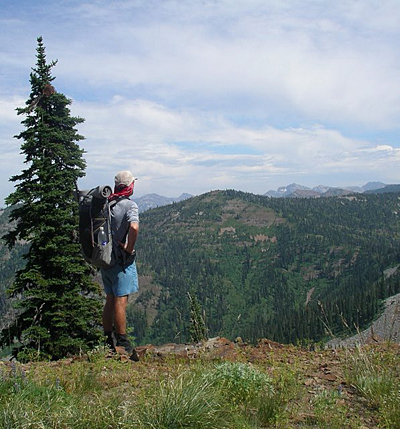 Frankle admires the view along the Idaho Centennial Trail in 2008. (Credit: Brian Frankle)

"My new Circuit is probably the most comfortable pack I've owned, even more so than my old ancient Dana Designs and Osprey packs, and I did not think this would be possible in a lightweight pack."

Another ULA believer is Andy Howell of Birmingham, England, who chronicles his adventures at www.andyhowell.info/trek-blog.

"I was intrigued by the way that Brian seemed to make packs in order to finance his own hiking," says Howell, who started with the Catalyst and worked his way lighter to the Conduit.

"As soon as I put on any of these packs I instantly appreciate that they have been designed by a long-distance hiker. Pockets are always accessible, both side packets on the pack and the wonderful hip belt pockets (a feature that has now been copied by many mainstream manufacturers). Pre-order measuring ensures that the packs always sit comfortably and the shoulder straps carry just enough padding to make them very comfortable."

That doesn't mean hikers never will cuss a ULA pack, as one PCT through-hiker commented at ULA-Equipment.com:

"My Circuit performed well for most of the hike. I have to admit that I was preaching venomous hatred for it coming out of Kennedy Meadows with a big bear can full of 8 days of food and 5 pounds of camera equipment. The pack was far too overloaded and the blame was on me." 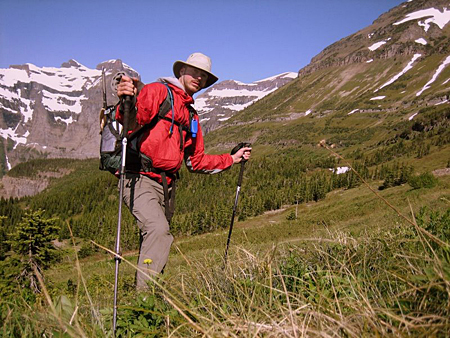 I asked Sam Haraldson, a backpacker in Bozeman, Montana, who manages the online store at Backpackinglight.com, what sets ULA apart.

"The first quality that ULA brings to the backpack industry is specialization," he said via e-mail. "Brian's packs are fine-tuned for their intended purpose. The Amp is no more of a pack than necessary for a weekend hike or a peak bagging day trip. The Conduit provides the bare minimums for a thru-hiker. The accoutrements built into each pack satisfy the needs for that purpose and no more, thereby saving weight.

"The second most worthwhile aspect ... is that you are dealing with him and a small workforce who are producing a product tailored to your hobby right here in America. Your money goes straight into the pocket of a fellow backpacking enthusiast (and a well-traveled one, I might add)."

Frankle says the business gets bigger every year, regardless of the overall economy's health. While he credits his time on the trail for sustaining the business, he says feedback from his customers drives a lot of his best ideas.

"So much of my design is processing other people’s ideas and making them functional and usable for a wider swath of people," he says.

Most of the folks quoted in this story have web sites that are worth checking out. They're at this post on my hiking blog.