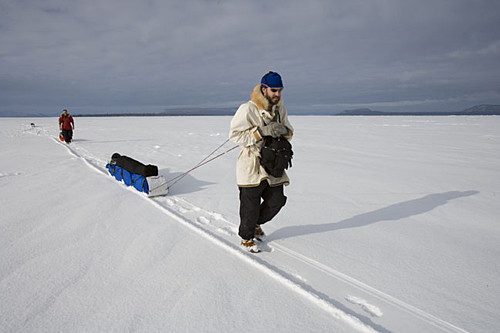 Three decades into the Age of Gore-Tex, some people are still wearing cotton and wool into the woods in the depths of winter.

They have a fellow traveler in Kevin Kinney, owner of Empire Canvas Works, who sews cotton outer shells, oilskin rainwear, wool shirts, mittens, and boots in his garage in Duluth, Minnesota, one of the coldest cities in the continental United States.

All that’s behind him now: he craves natural fibers with a zest once reserved for high-tech synthetics. The turnaround began when Kinney arrived in Duluth in January 1997, figuring he had all the cold-weather gear he’d ever need. Then he attended an annual sled-dog marathon during his first weekend in town.

“I’m coming from Colorado. I’m from a mountaineering and cycling background and I’m all dressed up in my best Gore-Tex,” he recalls. “I thought I was big and bad, and I spent two hours in the cold just absolutely shivering.

“All these people around me seemed pretty happy standing around in this big funny, puffy, dorky-looking clothing with these mukluks on and these big mittens. I thought ‘you look like idiots, but you’re warm. What am I missing?’ ”

I put that question to users of the website WinterTrekking.com, which has a small Empire Canvas rooting gallery. Glen Hooper, co-creator of the site, says cotton and other natural fibers have a distinct advantage in frozen climes: 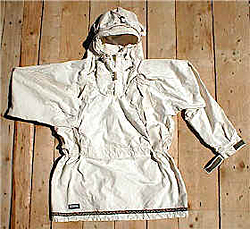 “Once you use a cotton outer shell, you can never go back to sweating in synthetic shells, when working hard hauling a sled, sitting by the fire, or snowshoeing long distances,” Hooper says.

“Sitting still in spectator situations or ice fishing — well that’s another story — any thick insulated synthetic parkas are great for sedentary cold situations. But as soon as you have to work hard, these synthetic shells will soak you quick, and you need a breathable outer shell. The shell also wicks and absorbs moisture and will become wet, but that’s perfectly fine — it’s wicking all that moisture from your inner fleece or wool, keeping you dry and warm on the inside. Gore-Tex or any nylon shell will keep all that frost and moisture on the inside, making you clammy and cold.”

Duane and Margot Lottig of Solon Springs, Wisconsin, started Empire Canvas Works in 1994, naming it for the nearby Empire Swamp region of northwestern Wisconsin. Their wares included tents and clothing from cotton, wool, leather, and other traditional materials.

Kinney met Duane Lottig in 2005, the same year he had finished developing a wheelchair-accessible tent design he and a partner sold to the tent giant Eureka. He had his garage full of sewing machines and fabric samples, so he decided to take on some contract sewing jobs from Empire Canvas. 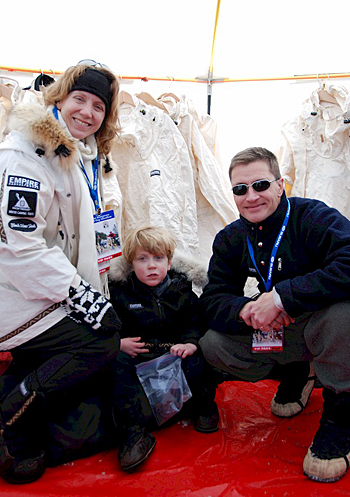 “I was really intrigued by the fabrics because the longer I worked with them, the less I laughed and went  ‘ha, ha, ha, look at this funny, archaic stuff,’ and the more I realized, you know, these are the textiles that built our nation,” Kinney said.

Empire Canvas Works allowed Kinney to apply his knowledge of high-performance outerwear to traditional fabrics. His prototypes wowed Duane Lottig, who found Kinney was pretty much a perfect match to buy the clothing side of Empire Canvas.

“Kevin was obviously good at design and construction of outdoor clothing apparel,” Lottig said. “Kevin has done a lot of great things with the clothing that I was not capable of. And obviously from my point, having operating my business from out of my garage for 15 years, I had a soft spot for garage-based businesses.”

The Lottings sold Empire Canvas Works to Kinney in 2006, but still sell their SnowTrekker canvas tents, designed to be warmed with a small wood stove.

Backpackers accustomed to sweating every ounce might be stunned to learn that with relatively flat terrain, you can haul your body weight on a toboggan across snow. That means you can lug a heavy canvas tent, a wood stove, and other subzero gear into the woods for a weekend of ice fishing or cross-country skiing.

While cotton and wool will get wet from sweat, they can be dried near the fire without fear of melting, a distinct risk with synthetics. The fire also allows more comfy kickback time in the tent because you’re not bound up in so many layers trying to stay warm.

“The tent makes everything possible,” Kinney says. “If you can find some firewood and some water, you’re only really limited by how much food you carry.” 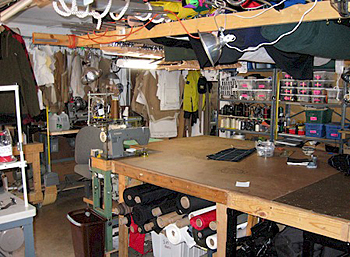 The interior of Kinney’s garage, where he sews all the Empire Canvas Works clothing. (Credit: Kevin Kinney)

Kinney does all the sewing in his Duluth garage. His most popular items are his Arctic Anoraks — large, tent-like outer shells sewn with tight-weave cotton that blocks winter winds but has the breathability edge over synthetics.  Kinney says the “cotton is killer” adage still applies if the cotton is next to the skin, where it will get soaked, stay wet, and stop insulating. Cotton against the wind, however, works just fine.

Kinney’s wool shirts are cut from blankets made of 80 percent recycled wool and 20 percent nylon. The blankets get two runs through the washer to preshrink the fabric, then they get cut and sewn into shirts. Kinney cautions that some people find them a bit scratchy and concedes they are much heavier than synthetic fabrics, but they don’t require much upkeep and are much more resistant to the bacteria that make synthetics so funky after heavy use.

“I compare sports cars to pickup trucks. Wool is the pickup truck, polyester is the sports car,” Kinney says. “Eventually you gotta stop and wash all that gunk out of the sports car to get it back up to performance and back into the field, but the truck keeps going.” 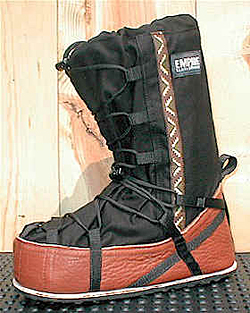 The boots model mukluks, traditional far-north footwear. They’re not waterproof, nor should they be, Kinney says. People in traditional cultures used moss and other materials to draw perspiration away from the feet, which stayed warm as long as they stayed dry. Kinney’s design combines a sandal bottom with a canvas top layer.

“A gent wrote me yesterday who bought a pair of our boots last year and said that after years and years of living and working in Montana, for the first season of all those years he had warm, dry feet,” Kinney says. The buyer was a rancher who had always worn traditional boots, but had finally come to understand that letting moisture escape the boots was more important than trapping heat inside.

Empire Canvas Works is not a big business. Kinney counts his sales in dozens and counts on his wife’s full-time job at a local hospital to provide a base income (while he serves as full-time dad to their son). More than half of his customers are Canadian and a third of the non-Canadians live in Alaska.

Kinney is busiest from October through mid-February. Most orders go out in a day or two unless he’s short on certain fabrics. The financial crisis of 2008 pinched a few of his suppliers, forcing some customers to wait.

“I asked if anyone knew where I could find an Arctic Anorak at somewhere other than Empire Canvas because I did not want to wait for a new one to be made,” Gerry Geddes and of Milton, Ontario, Canada, said in a post at WinterTrekking.com. “I looked around and decided that the Empire one was the one I wanted and decided to hang on and wait.

“Well it arrived yesterday and all I can say is wow. This is one fine piece of craftsmanship that is probably the nicest outer layer garment I have ever bought. I knew it would be nice, but I had no idea it would be this nice.” 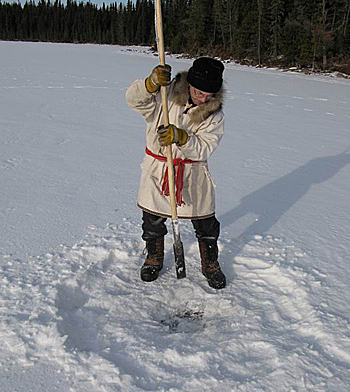 Hooper, the WinterTrekking.com co-founder, who lives in Thunder Bay, Ontario, offered historical context on the use of cotton and wool in the North Woods.

“The cotton anorak goes back over 300 years, when Hudson’s Bay Company and Northwest Company were introducing tight-weave, light Egyptian cotton canvas ‘sail silk’ left over from used sails as trade goods cloth,” Hooper says. “They offered it in new cloth as well. The First Nations folks immediately adopted it as a practical material for a breathable outer wind layer, and as a tent material (sail cloth was of course woven very light, tight, and strong), and it has ever since been the best-ever outer clothing shell south of the open tundra, where in deep cold and wind, caribou hides tend to take over.

“In the trees, tight light cotton shells rule, with wool and fleece underneath. When working hard and it’s not windy, even in deep cold, even this uninsulated cotton shell gets too hot, and you will see the people of the bush wearing thin multiple layers of wool or fleece without a shell, venting all the moisture. This is how we work hard and stay warm and dry and comfortable.

“This is not an ‘old-fashioned’ fabric. It simply has not been improved upon.”

Nice article Tom. Hoop and the others at wintertrekking have made me feel welcome and Kevin is a regular poster there as well. Don't have any of his gear yet, but for really cold weather, his Anorak gets rave reviews, as you already know.

Thanks ... it turns out one of the readers of my hiking blog has actually visited Kevin's garage.

I have an anorak and met Kevin once, but have yet to make it to his garage. I have one of his wool jackets on my radar screen. Great to see a local firm get a spotlight, thanks for the article.

This all makes sense to me-I never quit wearing wool and cotton tho I have often blended in modern synthetics while plenty of my experience, which began many decades ago, was in the Adirondacks.

Nordic armies wear cotton long johns [that should say something] and natural materials worked since the beginning, so why wouldn't they work now?

I enjoyed seeing this article and I hope others learn that 'new isn't always better' even if it is more fashionable.