Doug Clark has ridden a rollercoaster with GoLite Footwear, standing by his brand when a corporate giant gave up on it. Now he's hoping his "upside-down" approach to shoe technology, one designed to work with the natural human gait, will provide a foothold in the highly-competitive outdoor shoe market. 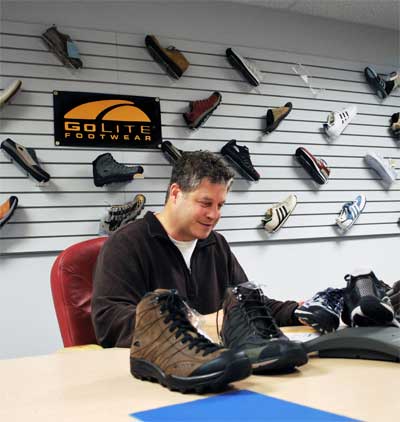 Doug Clark with some of the shoes in GoLite Footwear's line.

Clark is CEO of New England Footwear, a company he started in 2008 to keep the GoLite Footwear brand alive after bootmaker Timberland decided to kill it. Clark learned to design athletic shoes at Nike, Converse, and Reebok before landing at Timberland, where he led a team that would develop the first GoLite Footwear shoes. Not long after the first models arrived on the market in 2007, however, Timberland shifted gears and decided to shut down the brand.

“I was sitting there as the guy who had kind of created it and just couldn't bear to stand by and watch it close down,” recalled Clark. “I knew this technology could change the way everybody thinks about shoes in the future.”

In 2002, Timberland decided to close a gap in its product line: trail runners. The job went to Clark, vice president of the company's Invention Factory, a new-business incubator. Clark figured trail runners needed a basic, lightweight shoe, which squared with the philosophy of GoLite, the lightweight backpacking gear company started by Kim and Demetri (Coup) Coupounas in 1998.

Clark observed that over-programmed lifestyles and scarcity of free time created the peak-bagging and trail-running revolutions. Rather than embarking on extended backpacking trips, more people were going faster, requiring lighter-weight gear. Clark added bluntly, “you can really enjoy the outdoors when you're not encumbered by all the crap that we always used to think we had to have when we went out into the wilderness twenty years ago.”

With that idea in mind, Clark approached GoLite. “In this world of light and fast, GoLite was the only outdoor brand that I could think of that didn't stand for the substance and protection and heft that a typical outdoor brand or company usually stands for,” he said. “They stood for light, minimal, and free.” A relationship was forged. Clark would head up GoLite Footwear at Timberland, and Kim and Coup would go on with their GoLite gear and apparel business.

Heading out onto real trails, with real trail runners, Clark's team launched an exhaustive investigation. They learned that a shoe's midsole — designed to ease the shock of running on roads — is inherently unstable when it's made of soft foam. While midsoles are fine shock absorbers, they aggravate the foot's tendency to rotate while running, a motion called pronation.

“Even the most neutral runner is still pronating on flat, even roads about ten to twelve degrees,” said Clark. So the GoLite Footwear team put one of those ten- to twelve-degree pronators on the trail, in the mountains, with high-speed cameras looking on.

Doug Clark of GoLite Footwear demonstrates the concept behind "Soft Against the Ground" design in an interview with runBARE.com at Outdoor Retailer in January 2010.

“What we saw was pretty interesting," Clark recalls. "The ten-degree pronator was violently thrashing around thirty degrees in both directions, depending on the terrain he hit. It made you cringe because you couldn't understand how people weren't snapping ankles.”

Clark's team became convinced that the footwear industry had everything backwards, or rather, upside down.

Historically, shoes have been made with soft, unstable padding directly underneath the foot, with stiff soles against the ground. “It's like building a car where the shock absorbers are underneath the seats and you put your chassis underneath that," said Clark. "Every time you hit something, you'd be all over the place.”

With this hypothesis in mind, Clark and his team turned their shoes upside down, putting a firm insole directly beneath the foot, and a soft outsole at ground level.

“Every single prototype we mocked up and modeled found we could actually reduce the rear foot motion by thirty-three percent, no matter how we did it," Clark said. This "eureka moment," as he calls it, spawned the "Soft Against the Ground" and "Paw Pads" catch phrases that define GoLite Footwear's products.

While Clark was busy bringing GoLite Footwear to market, the marketplace was turning against Timberland. Reversals in its shoe business prompted the company to drop GoLite Footwear and focus on the core Timberland brand.

Unwilling to let his brand disappear, Clark acquired the intellectual property of “Soft Against the Ground” shoe technology and the GoLite Footwear brand in 2008. Under the newly formed New England Footwear (NEF), Clark, named CEO, would continue his work on GoLite Footwear. 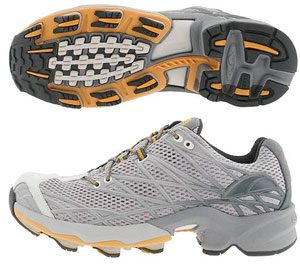 Clark knew he was in for an uphill battle. After bringing GoLite over to NEF, the new shoes had to overcome the stigma attached to the initial line released by Timberland, which had durability problems.

On top of that, "soft against the ground" was a drastically new and different idea, one that needed to be explained. “What our approach does is it gives the pressure distribution of a clog underneath your foot because there is a very firm piece of foam underneath your foot, and it gives you the ride of a sneaker because underneath that firm foam we have a very soft foam. We give you the best of both worlds,” said Clark.

“Most people put on our shoes and they start bouncing because it's a very unusual sensation. It's like the Sealy Posturepedic commercial that says comfort in a bed comes from holding you up, not letting you fall in. Our shoes are the Sealy equivalent.”

The GoLite team also was concerned with grip and tread. Out of the box, the GoLite shoes have an unusual look. The claw-like lugs on the bottom are more prominent than most other shoes in the category and use a “Grip Stick Rubber” outsole, a unique rubber formula Clark discovered several years ago when working with rubber compounders in China. Although Timberland wouldn't invest in the more expensive rubber when it owned GoLite Footwear, Clark has since employed the more durable, but less slippery, compound for every model.

In the last year, GoLite has added fastpacking, multi-purpose, and travel shoes, rounding out its outdoor offerings. Fall 2010 shoes will debut with BareTech technology, which features a completely neutral last with no heel strike, designed to complement the motion of walking barefoot, but with stability control, according to the company.

New for 2011: The women's Spark Lite is described as a state-of-the-art fastpacker built on GoLite's new BareTech platform to emulate the foot's natural running motion.

True to the GoLite brand name, the company plans to keep dropping weight from all of its shoes in the future. Most GoLite models on the shelves this fall will be down to 9 to 10 ounces per shoe.

Brian Lewis of Bellevue, Wash., is an avid hiker and self-described "function over fashion guy." He thru-hiked the Pacific Crest Trail in 2008 in GoLite Sun Dragons, and is currently hiking the Appalachian Trail this summer in pairs of both the Versa Force and Sun Dragon II.

Having worn GoLite shoes since they were introduced under Timberland, he noted the durability issues before the redesigns, but in an interview before his AT thru-hike said he was, encouraged by his limited experience with the Versa Forces and would use them on the AT.

Readers checking Lewis's daily thru-hike journal on postholer.com for an on-trail assessment of the shoes will find only the occasional mention of minor foot issues, such as a few blisters from wet feet, in his travels from Georgia to Maine. In a March entry, he wrote of the Versa Force and Sun Dragon II, "GoLite clearly is doing much better on this in the new models. ... When I figure out which of those I like better I'll order more pairs later this year."

As GoLite Footwear moves forward and looks to gain a stronger foothold in the industry, it will rely on a nimble and efficient team. Based out of Portsmouth, N.H., the company also has labs at the University of Massachusetts and the University of Hong Kong.

Moving on from corporate giant Timberland, the new GoLite Footwear is operated by a 10-person team in a grassroots effort of sorts. Clark says the lean team allowed them to develop their first line under New England Footwear in just six weeks, and said, “we're going to try to maintain that small-company feel so we can stay flexible.”

Clark has worked with every one of his employees in the past. In fact, a number of the current employees are Timberland defectors. “We have a little joke around here that we got the band back together,” said Clark.