Arc’teryx is known for its high-end outdoor apparel, but the company doesn't believe staying warm and dry should be a luxury.

For the third year, the North Vancouver, B.C., company has turned its end-of-roll and discontinued Gore-Tex fabrics into outdoor necessities: all-weather capes for the homeless and disadvantaged. 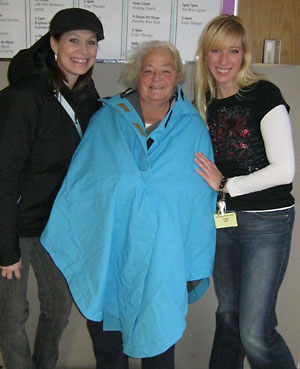 The Birds Nest Project is a collection of Arc’teryx employees who donate their time over three weekends to sew and assemble the capes at the company’s Burnaby, B.C., factory. The 65 to 70 volunteers come from all areas of the company and are led by a core of volunteer in-house professional sewers. Over three Sundays, team members produce more than 700 Gore-Tex capes.

In December, the windproof, waterproof capes were given to Harvest Project in North Vancouver and Salvation Army Harbour Light in Vancouver for distribution to the homeless and disadvantaged.

The cape idea originated with Arc'teryx's Green Committee as a way to deal with excess fabric and prevent it from ending up in a landfill. In 2009, the Birds Nest Project produced about 300 capes. In 2010, the number increased to 560. This December, more than 705 capes were distributed.

The cape originally was designed by Tara Latham and Sean Wood of Arc'teryx and has seen some small improvements to make it as simple and weatherproof as possible.

"It was designed to drape over backpacks and belongings specifically with our end user in mind," said Joanne Mayzes, one of three Birds Nest Project leaders, along with Nancy Fedoruk and Kristi Birnie. "It was also made as a one-size-fits all to accommodate more people. We have had very good feedback on how it has performed precisely for what we had hoped it would." 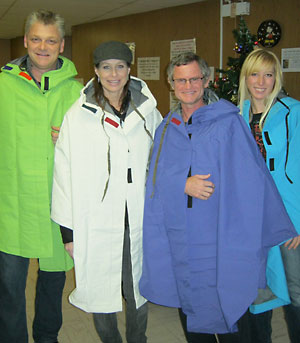 The capes come in both a non-insulated and an insulated style and a variety of colors, but otherwise are essentially the same with minor changes during the assembly process to include all levels of sewers, says Mayzes. Each cape fastens with a drawstring and Velcro and can be rolled out into a blanket and packed up into a bundle for easy carrying.

"And the second from an employee who made the comment that would like to continue to stay at the factory longer to finish up more capes after having worked almost eight hours on a Sunday already."

(All images courtesy of Arc'teryx)

Great story.  Would I be alone in wishing that they made these commercially?  I know The Packa is similar to this; never tried one but people who have them love them.

This is about the only way I could ever afford something from this company.

If you can't buy one commercially you might be able to buy one from a homeless person.  Or maybe trade?

Eh.  I don't mind paying out the nose for quality, especially when upper management fosters an environment where social justice is also a consideration.  Patagonia also comes to mind.

A waterproof poncho?  Sounds like they're missing out on a backpacker's dream!

On another note, it is pretty cool that Arc'teryx is doing something like this.  When everyone is mass purchasing brand X at the lowest price produced in the slum of the week, there are companies that produce in less volume but remain focused in the local market.  I realize that Arc'teryx does have manufacturing offshore, but it's really great to read about this going on in community.  It's a case of putting a face on a corporation, which is not easy these days.

As a social conservative, I love this stuff! It is what I have always argued we as individuals/private sector are supposed to do. The more of this that is done, the less government  has to collect to do it their inefficient, beaurocratic  way.

Makes me feel better about the megabucks I shell out for Arc'Teryx.  Quality has a price and so does North American production.  Keep it on the continent!

I wish Arc'teryx would sell the capes, insulated or not, for bicyclists.

The purchases would further subsidize the capes for homeless.

I would purchase one.

Now if we could only create urban park-green spaces for homeless tent cities.  I've got a few tents to donate . . . . .

Occupy everywhere seems to be doing pretty well with the Urban Parks.

A grand idea. Well done to the crew at Arc'teryx.