When Crescent Moon launches its carbon fiber Black Kilo snowshoe for winter 2013, not only will it be the lightest on the market at 2.2 pounds per pair, it could herald a new direction in snowshoe design, says Jake Thamm, company president and co-founder.

“To my knowledge, there are no other all carbon fiber frame and deck shoes on the market,” said Thamm. “The Black Kilo weighs 2.2 pounds, including the binding and crampons, and is by far the lightest pair of shoes on the market.” 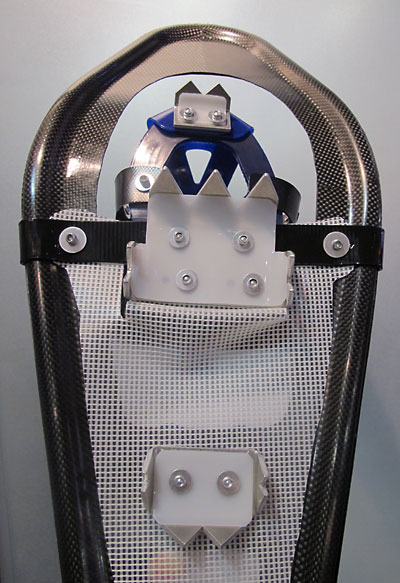 The teardrop shaped Black Kilo, a racing snowshoe, will have a carbon fiber composite frame and platform with cutouts. The cutouts allow Crescent Moon to suspend its race binding and its traction system with aluminum crampons. A minimal amount of TGS decking, the same used on Crescent Moon's other snowshoes, is attached within the platform’s cutouts.

Crescent Moon isn’t producing the Black Kilo as a one-off concept piece though. It hopes to transition the carbon fiber technology into its other lines. Potentially the Black Kilo could result in a universal platform upon which Crescent Moon attaches any of its bindings, with a variety of crampons, in a variety of sizes, to address multiple uses and conditions, says Thamm.

“From racing shoes to off-trail and everything in-between, Crescent Moon’s carbon fiber line of shoes have lots of upside,” said Thamm.

Wondering about using carbon fiber in the cold?

“Carbon fiber has a long, well established legacy of use in cold and extreme environments — rocket ships, submarines, airplanes, etc.,” said Thamm. So, the company wasn't concerned with the environmental challenges, but rather how to apply carbon fiber technology specifically to snowshoe usage.

Or, as Thamm explains, “specifically, the shock and abrasion characteristics, which require a composition of materials to provide components of elasticity, endurance, and something we have come to recognize as rebound, or the springy nature of the shoes when running on them.”

And while carbon fiber can get a reputation for being brittle, Crescent Moon has been testing various composite prototypes for months to ensure the material maintains its strength under use. The company had a Black Kilo prototype on view at the Outdoor Retailer trade show last month (see picture above), which it will be testing the rest of this winter. 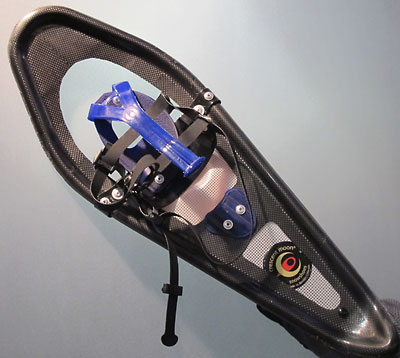 Black Kilo with Crescent Moon's race binding at OR.

Thamm credits Crescent Moon co-founder, CFO, and R&D officer Tamara Laug for the Black Kilo concept. He says Laug began thinking about a carbon fiber composite shoe two years ago and has been responsible for 100 percent of the initial concept, design, and prototyping. She also identified U.S. sourcing for the project. “It's all within the U.S., which is a fundamental tenet of our production philosophy,” said Thamm.

If proven over time and use, Thamm believes carbon fiber has the potential to impact the direction and scope of snowshoe design, much as aluminum did 20 years ago.

“A number of things have to happen in order for that to occur, not the least of which is cost reduction," he said. “But with the technology and production issues resolved and the unique processing we’ve identified to make it practical and affordable, I believe the Black Kilo, and subsequent models we have in mind, will result in a much lighter snowshoe that will attract new customers and enthusiasts to the backcountry.”

Crescent Moon has a racing snowshoe that requires you to bolt a pair of running shoes to the snowshoe. Will you be able to wear any kind of shoe with the Black Kilo and avoid having to use a special mounting system?

Crescent Moon has a racing snowshoe that requires you to bolt a pair of running shoes to the snowshoe. Will you be able to wear any kind of shoe with the Black Kilo and avoid having to use a special mounting system?

Good question, Philip. Yes, the Black Kilo has bindings and those are included in the weight.

Crescent Moon, and a number of other snowshoe companies that make racing shoes, offer direct mount systems on some models. In Crescent Moon's case the Gold 12 running snowshoe you're thinking of is offered with either bindings or the direct mount option.

But to answer your original question, the Black Kilo has a binding.

If the shoe works out, I wouldn't be surprised to see a direct mount version later (that's just my own conjecture though).

Ok, on second thought maybe not.

Pretty cool but pricey.  Don't hit a rock either.  They shaved quite a bit of weight off too.