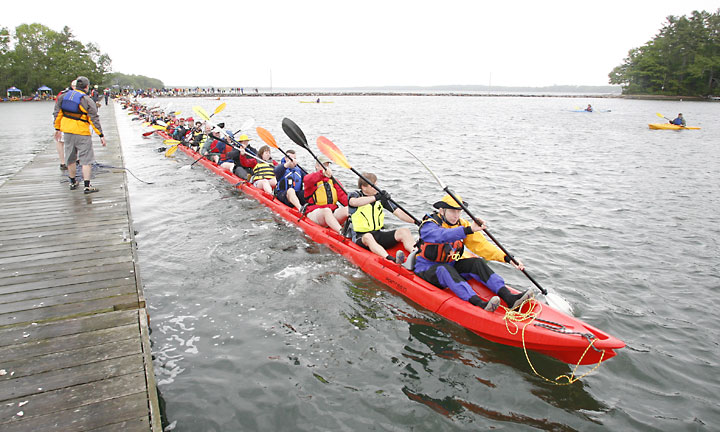 Think it's hard paddling a tandem kayak in sync? Try paddling one with 99 other paddlers, from champion whitewater paddlers to first timers.

In June, 100 L.L. Bean employees did that, paddling a 407-foot 7-inch long kayak, as part of the company's ongoing 100th anniversary celebration.

L.L. Bean created the unique kayak from sections of Point 65N's Modular Kayak, which can be joined together, though usually to convert it into a tandem model.

The world record attempt was made Saturday, June 2, at the L.L. Bean Paddling Center in Freeport, Maine. L.L. Bean is now submitting an application to the Guinness World Records for consideration as world-record for the longest modular kayak ever.

A video of the world record kayak attempt can be seen below:

I wonder how hard it is to roll. :p

I don't think that would go round  corners whist on my Yakima Rack with hully rollers.

Rick I was wondering the same thing

Rick I was wondering the same thing

I would think that an intercom system would be necessary in order to get everyone on the same page. ;)

I have to admit I do think it is pretty cool though.

I hope a bit of celebratory beer was involved.  Looks like a great excuse for a company picnic.

It would be pretty difficult to beat this for a Guiness Book of World Records.