Your pack's rigid frame sheet helps transfer loads to your hips for a more comfortable carry over miles of trail. But a typical plastic or closed cell foam frame sheet also adds some weight to that load and doesn't adjust for comfort. How about a frame sheet you blow up?

Klymit's Air Beam is made of lightweight fabric and inflates with pressurized air. According to the manufacturer, it's lighter than many frame sheets due to the use of pressurized air, and is stiffer, more comfortable, and allows freedom of movement, increased adjustability, and optimal load transfer. When not carrying a load, the Air Beam doubles as a sit pad or extra sleeping pad insulation in camp.

The Air Beam weighs 2.4 ounces without the hand pump and 3.3 ounces with the hand pump, which can be used to customize the air pressure. At only 3/4 of an inch thick, the Air Beam is designed to keep the load close to the user’s back for a direct transfer of weight to the hips. 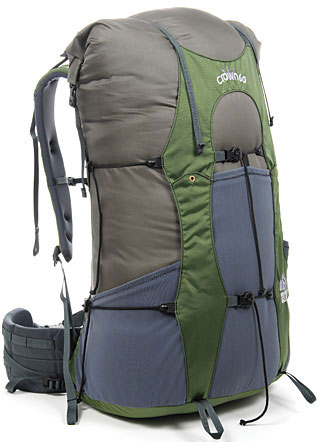 Gabriel Rhoads and Matt Maxfield, co-developers of the Air Beam concept, say that optimal load transfer is one of the biggest advantages of the Klymit Air Beam.

“Backpack frames are rigid and designed to transfer loads directly to the hips, yet because they are rigid they only transfer directly when the body is in one or a limited number of positions,” said Rhoads. “By using super light fabrics and pressurized air, Klymit has developed a backpack frame sheet that transfers load to the hips in wider variety of positions, even while tying your shoes.”

And starting this fall, Granite Gear will introduce the Klymit Air Beam in its Vapor Current (V.C.) packs, including the Crown V.C. 60. All Granite Gear Vapor Current packs come standard with a die-cut HDPE frame that can be removed for trips when loads are below 25 pounds. For fall 2012, the packs will offer the option of upgrading to the Klymit Air Beam. Switching to the Air Beam will save 2 ounces over the stock HDPE frame while keeping the load rating at 35 pounds (AirBeam MSRP: $49.95).

Have you used an inflatable Klymit Air Beam in your ultralight pack?

Tell us about your experience in a gear review.

I am curious as to where they state that it provides "optimal load transfer." This has me kind of scratching my head.

Compared to what under what type of load?

On one side you have the whole UL philosophy...

Then there is the claim that this frame sheet will work with a 75L pack?

If one is utilizing a pack of this type of interior volume I would question how well the Klymit sheet would work being with a 75L pack there could be substantial pack weights involved.

Granted, my Argon is a heavyweight in compaison to the packs that are mentioned but my thought is that the load transfer capabilities of the dual stay in the Argon make this pack feel alot lighter than it actually is under load.

I wonder how the Klymit would stack up in a truly "loaded" 75L pack in regards to rigidity, comfort, stability, load transfer, so on and so forth.

ULA Equipment also has this as an option.

There is no comparison to stiff stays or a framesheet.  Using a pad, inflatable or not, as a pseudo frame is not new and UL'ers have been using this in their frameless packs for years.  Mainstream is now trying to cash in.

Granite Gear needs to re-do the suspension on the Crown anyway.  The shoulder straps (padded portion) has been reduced to save weight.  It really sucks.

I considered getting the MLD air beam for my CCW Chernobyl to replace the folded closed cell pad as the framesheet. I decided not to due a couple of factors at least for my uses: closed cell foam has higher insulating properties than a 3/4 inch air filled mat which I might need for an emergency bivy, I don't need to carry an inflator for closed cell foam, I don't need to carry a repair kit for closed cell foam, I don't have to adjust the air pressure in a foam pad as I gain or lose altitude or due to temperature fluctuations, and a 2 ft x 2 ft foam pad is about the same weight as the inflatable one. Plus the final deciding factor for me was the cost of the inflatable pad.

Hey Folks,
These are all legitimate comments and I share the sentiments towards soulless mainstream companies, marketing jargon, and the purporting of personal annotation as law.  In a way, I am flattered that Family Guy refers to us as mainstream.  There are six of us who work our Butts off at Klymit, and if in our 2.5 years on the market have seen the growth that we have achieved the market share of "mainstream" I'd say we must have done something right.  I can promise you we are trying, and are committed to doing things the right way.

Rick, you are absolutely correct.  This product is targeted at the lightweight end of the spectrum, and performs best at loads under 40 pounds by itself in my experience.  A 75 L with the Air Beam and a carbon, delrin, or alum stay will carry 50 to 70 lbs well, no problem.  The total weight of that frame system could be in the neighborhood of 4 to 10 oz.  The Air Beam in the Cilo Gear 75L is a good example.  It is the primary framesheet for the summit, but part of the system for the base camp trek.

Callahan- Klymit has yet to spend one dollar on advertising....so far. :)

Family Guy- You are right about the tradition of using inflatable pads for a framesheet.  What is an important distinction here is that the Air Beam is designed to withstand pressures up to 12 psi, so it becomes incredibly stiff.  Most inflatable pads burst under 4 psi.  They are, on average, about 3/4 in thick, and some are tapered, so they take little volume.  The way the Air Beam Frames are articulated, reinforced and designed leaves little comparison between them and using a sleep pad.  If you had one in your hands the differences would be stark.  The Air Beam is also dynamic, and allows you to adjust the stiffness, contact points, and thus the load throughout a hike or ride on the fly, and be more comfortable.

Rob, I hear you.  You are dead on, except with regard to weight and stiffness.  Generally, our framesheets are half the weight of the CCF, and are 10X stiffer.  They are also more comfortable.  I'm not sure what CCF you speak of, but with the framesheet you can put the bulb wherever you want and adjust the stiffness on the fly, even for different graded pitches.  We have had no issues at all with elevation variances on Aconcagua, Kili, Denali, and Cerro Torre, and we have yet to have a puncture in a pack.  I understand your reticence completely, however.

I sincerely appreciate the comments and deliberation.  New products deserve critique and discernment from experienced outside enthusiasts,  especially in a market as large and pontific as the pack market.  Gear takes on a new dimension when your life relies on it, and those of us out in the backcountry the most know this all too well.  Developing and testing this product has been a joy.  I hope all of you have a chance to try one for yourselves.  More companies will be launching their proprietary Air Beam Pack Frames soon, so stay tuned...

Thanks for joining the discussion and sharing your background with the product's design, Bodhi.

My pleasure Alicia!  I'm happy to answer any questions and concerns.  These forums are really "where the rubber meets the road".  Real users talk about products from real experiences here, and collectively our knowledge of all things gear benefits immensely.  I'm honored to be a part of it, and am oft inspired by the stories I read here.

I can't find any info on the Klymit website about these. I see that cilogear has a version available for $60. Will one of these fit in a First Ascent Alchemist 40 in replacement for the included bivy pad?

Klymit is scheduled to go live mid August with a pack page that will highlight all of our partners' packs and lay out the features and benefits of the Air Beam Pack Frames with some graphics and instructional videos.  Until then MLD and Cilo Gear have exclusivity to sell Air Beams to the general market.

What are the dimensions of your pack's current removable frame?  If you give me the length and width, I'd be happy to point you in the right direction to make sure you can get the right Air Beam Frame in your pack.

Bodhi, thanks for your input and welcome to Trailspace.

Welcome to Trailspace and thank you for your dedication to innovation, all the while considering the "deliberations" and expressed opinions of others.

I have had the pleasure of owning the UL Klymit Xframe for 6 months now, and I will be reviewing it in the coming weeks. Summary - I sleep well on it, which is not something I can say about many other sleeping pads...

Thanks so much for the warm welcome!  I'm glad to hear you sleep well on the X Frame, Xterro.  I'm still on one of our original hand cut X frames before we tooled up for the finished product, and the rough edges and pre production welds remind me of the time Matt Maxfield, our camping pad guru, spent toiling on a sonobond welder by hand for hours trying to perfect the design.  It took years of effort to get the body mapped concept into reality and when people enjoy it we get pretty stoked out.  :)

Bodhi- any chance you could get some pics of it up here. It would be kinda cool to see from original designs to production product.

I'd be happy to Jake!

I'm not sure if you mean the Inertia X Frame or the Air Beam Pack Frame, but their foundations correlate, and here is what I have at the ready.

This is a great shot we put together after winning ISPO brand new 2011 for the X Frame.  So much has evolved with our camping pad line since then, but this is a good illustration of how it all started, and the many renditions that allowed us to build a body of knowledge on how to reinforce and articulate inflatable products.  All of the black prototypes were hand welded, and if you look really hard we even tried to weld the shape of our logo for the hip section in one case...with the usual results when marketing drives design.  :)  The end result is the know how to optimize shapes, welds, chamber diameters, fabrics, laminates and integrating the processes to make bomber inflatable goods that welcome high pressures; out of super light fabrics.  This was absolutely necessary in the evolution of the Air Beam Pack Frame.

Klymit pads, specifically the Inertia X Frame, are excellent products. They have sold well with zero returns and after using the X Frame I have vowed never to use my T Rest again.

That means a TON coming from a guy who has had his hands on every camping pad out there.