With 1,000 outdoor brands and 20,000 attendees, the Outdoor Retailer trade show can be a busy, overwhelming scene. 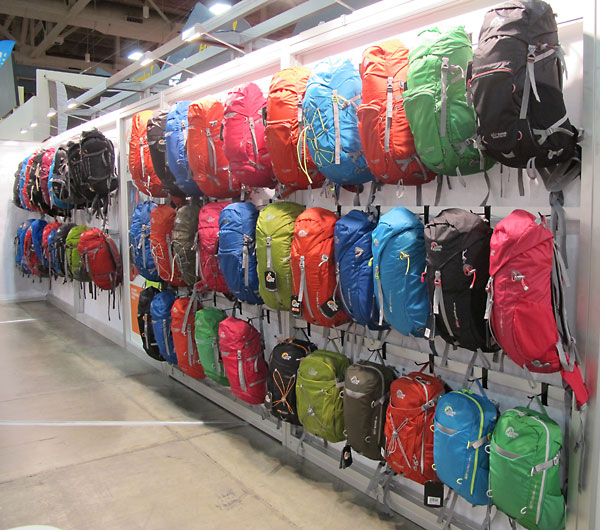 Lowe Alpine is back in packs. The brand, which was bought last year by Rab parent Equip, has overhauled its AirZone category with all new models, features, and updated styles and colors for men and women. Lowe Alpine's designers "had boxes and boxes of ideas," said marketing manager Sam Kilgore. Now they've been able to jump back in and rework the packs, and the brand, with AirZone Pro, Trek, Trek Plus, and Quest models. Features include an updated mesh back system on all packs, plus a variety of features like side entry on larger packs, large stretchy front pockets, and trekking pole tip holders. "There is so much potential in the brand," going forward, says Kilgore. 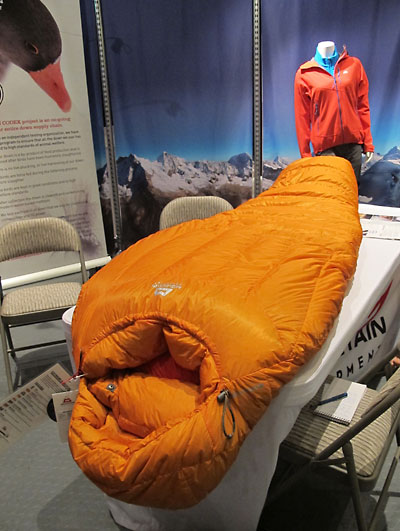 Mountain Equipment, which has been making down bags and suits for British first ascent climbers since 1961, spent the past 15 months overhauling its entire sleeping bag line. Studying thermal efficiency with the University of Leeds and ensuring that what works in the lab also works "30 days strong on a portaledge on Baffin Island," the company has redesigned and tweaked the whole line, from hood to footbox. That includes the 850-fill Snowline SL -4°F and Lightline SL 5°F bags in the Extreme SL Range (above), "for those pushing the limits of super-alpine climbing on the toughest routes."

The number one question Gregory customer service gets? How do I pack my gear and clothing in my pack correctly? To answer that, Gregory introduces the TrailSmart packing system with three distinct packing zones that separate trail gear from camp items and position frequently needed essentials at your fingertips. In the video above, Cory Lowe showed us the TrailSmart in the new Contour pack for men, available in three volumes ranging from 50 to 70 liters. The women's version is the Cairn series. 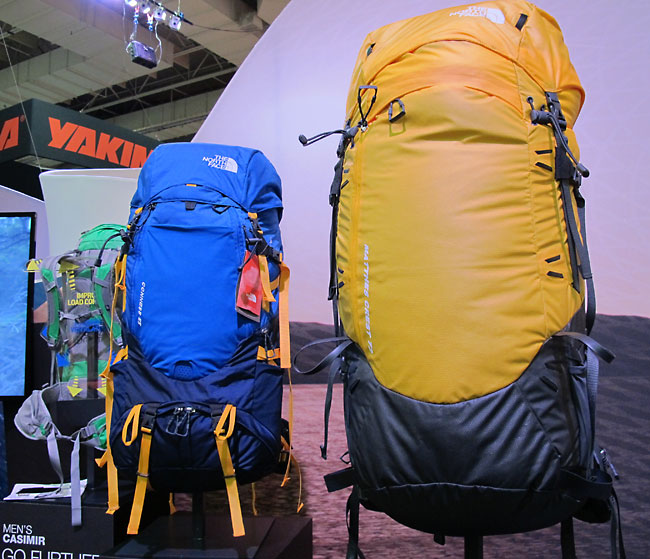 The North Face's new Opti-Fit system focuses on adjustability at the five primary points of contact between the user and the pack: the right and left shoulder, the right and left iliac crest, and lumbar curve. You'll find Opti-Fit in the men's and women's Matthes Crest and Conness pack series. 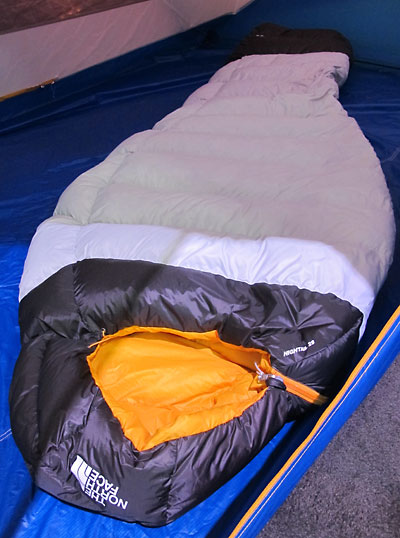 The North Face Hightail 3S sleeping bag ($419, above) has PertexEndurance on the head, collar, and footbox to prevent wet-out in moisture-prone areas. The Mica FL 2 is a  two-person, dual side-entry tent (1.64kg, $379). 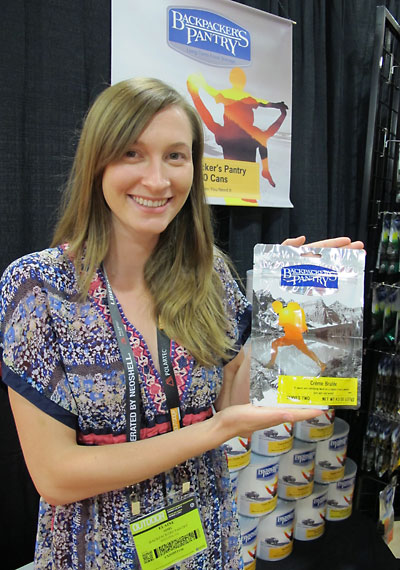 Elaine Sims is the culinary mastermind behind Backpacker's Pantry's newest dessert, Creme Brulee. Sims is one of two chefs, plus a food scientist, at the company. Also new for 2013 are the Cold Couscous Salad for lunch (just add cold water) and the hot entree Cuban Coconut Black Beans & Rice. There's also a 3-Day Meal Kit with an assortment of 12 popular two-serving dishes (three breakfasts, six entrees, and three desserts) with a shelf life of six years, good for bulk buying or emergency planning. 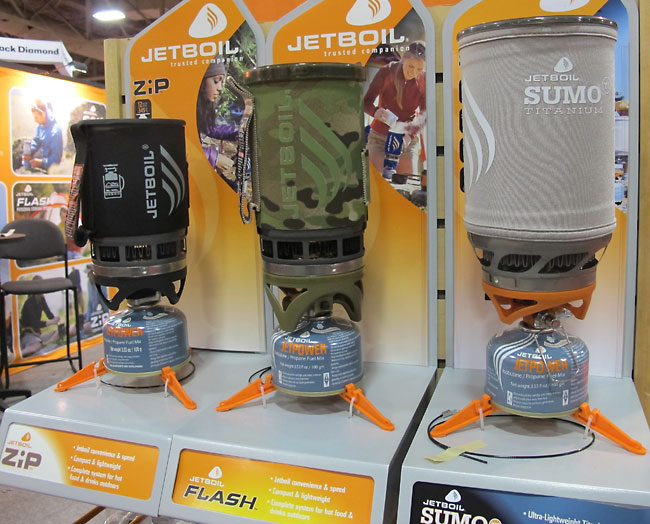 Where's the stove? Lame jokes aside, military and hook-and-bullet folks will appreciate Jetboil's new Multicam version of the Flash for covert cooking. There's also a new Tomato red, for those who want to be seen. 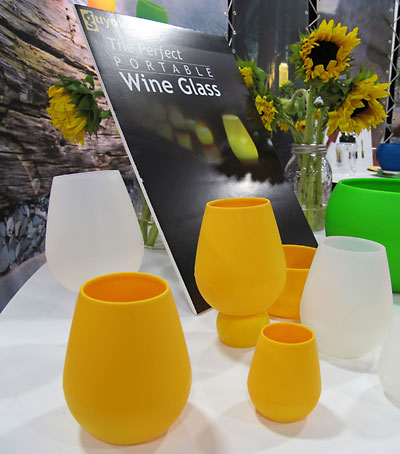 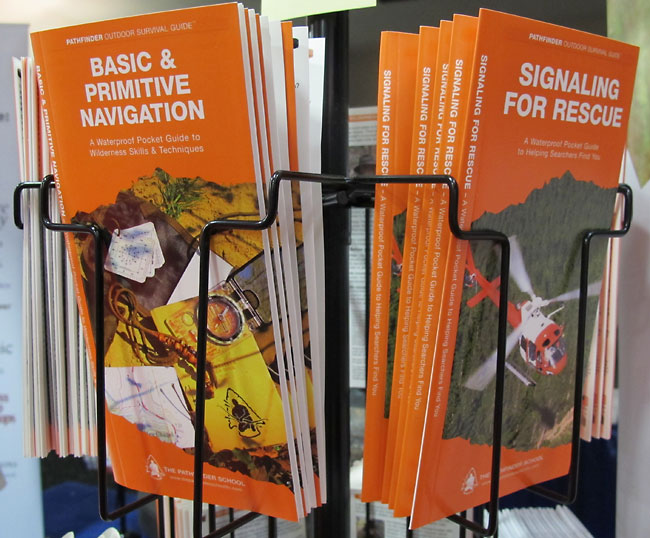 Waterford Press introduces Pathfinder Outdoor Survival Guides with 10 titles, including "Basic and Primitive Navigation," "Signaling for Rescue," and "Wilderness First Aid." The pocket-sized guides were developed with master woodsman and survivalist Dave Canterbury. “Whether you’re a hunter, a recreational hiker or even a civilian living in a city, everyone should know how to survive a dangerous situation,” says Canterbury. “That’s why we developed the Pathfinder guides, with all the information you need to make it out alive and kicking.” $6.95 each 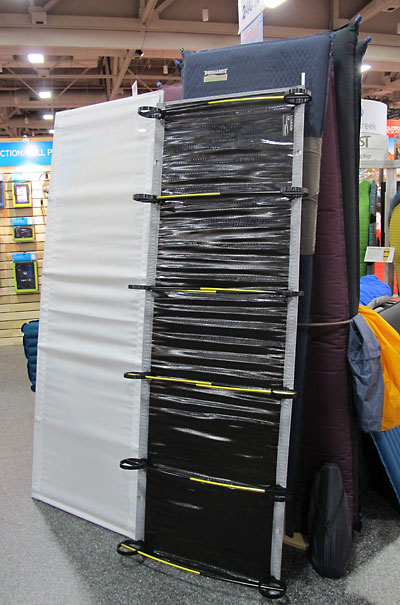 Would you backpack with a cot? Therm-a-Rest's LuxuryLite cots are good for those with back issues, or who want extra comfort in camp. A patented BowFrame Technology creates a stretch-free fabric bed that offers superior comfort. At 2 pounds 12 ounces, the UltraLite Cot is lighter and packs smaller than any cot on the market, says Therm-a-Rest. The Mesh Cot is 26 inches wide and weighs 3 pounds 12 ounces. 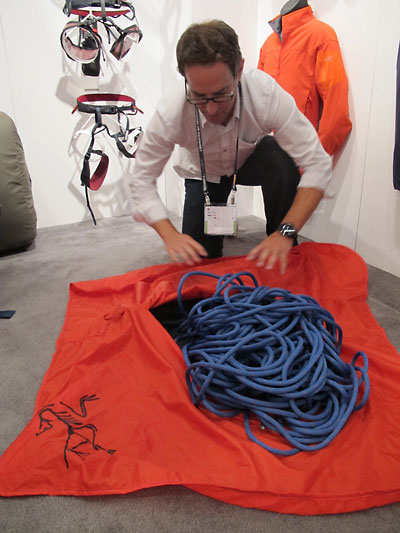 Arc'teryx's Haku rope bag makes it super simple to carry your rope from climb to climb, no tangled mess. The Haku offers an elegant way to organize and manage climbing rope. It's a tarp and bag in one piece that rolls into a compact and tidy shoulder carrier. Weight: 409g

With the amount of military veterans that come into our store to get snow peak cups and jetboil stoves, I'm not at all surprised, but am delighted to see the Flash System offered in Multicam.

Multiple times I've had people tell me when they've been in the field up in mountains in Afghanistan that they had one of these and fell in love with it, come back home and want one for their home use.

Interested to try the new Backpacker's Pantry meals and see how they hold up. They've yet to leave me disappointed.

I sympathize with most companies that show at OR, especially those referenced in the first four stories. The reality is that most gear categories are commodities, like gasoline or corn, since they are all using the same materials and same designs. So they are forced to differentiate their products with marketing stories that emphasize subtle differences with other competing products. To me, these "innovations" often seem like gimmicks, the brainchildren of non-users. I have to wonder whether these companies would be more successful in breaking out from the competition by instead focusing on:

Among other non-product considerations.

I agree with Andrew - I don't see a lot of useful innovation in most of those stories.  Everyone seems to be "overhauling" their gear, whatever that means.

I get the impression that more effort goes into picking a name for a line of gear than goes into designing it.

Most of us understand that useful innovation comes from tinkers/users, not out of cynical marketing departments.  Those folks are mostly about feeding gear lust, not optimizing utility.  They move the desireable into the market.  They make it pretty in order to make you want it.

Which is fine, actually, because we can't have an economy big enough to feed us all without stuff to buy/sell.  I also think it pretty clear that without all this beautiful (albeit kinda' frivolous) stuff far fewer folks would be going into the weeds, which would be bad for environmentalism.

This glass is more than half full.

IMHO, gear lust is quickly curbed on the trail.  One can only carry so much gear and the experienced backpacker knows what works for him/her and they rarely as a group succumb to the gimmicks.  Mr. Skurka, you are are in my opinion a great example of that point.

So, what is driving the market?  Based on my limited exposure, and what I see on the street, is that at least as far as apparel goes, the fancy rain gear and wonder fleece is mostly bought and worn by people who rarely/never even hike a trail or ride a bike.

Back to innovation, I for one an on the market to replace my 8 year old tent and pack.  I may not be buying the latest innovation, but that Cuben Fiber sure is exciting!

One thing for certain, Mountain Hardwear, Ospey, TNF, MSR, etc, are definitely not getting rich off me, but I will purchase their products when I actually NEED them, and based on past experience, quality gear lasts a LONG time.

One more boring point and then I am through.  Quality brands sucha as but not limited to companies above will stand by their products support you when you have a valid claim.  Feel free to PM me for an example or two if you are inclined to know my side of the story.