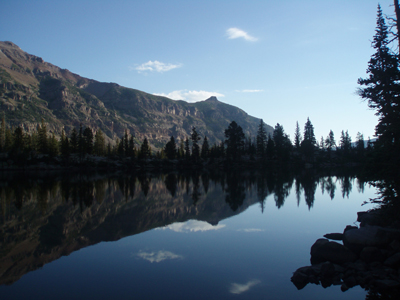 Biological, chemical, and aesthetic contaminants can be found in any water source, even in the backcountry. (photo: A. MacLeay)

The first two groups are biological contaminants and chemical contaminants. The aesthetic group is material suspended in the water that may not cause illness itself, but looks unattractive and can interfere with removal of the first two.

First, it should be noted that extensive testing of water in U.S. and Canadian areas popular for backpacking and canoeing, in all seasons, indicates that whether there is contamination and how dangerous it is varies widely from place to place, even within a given area.

For example, studies in the Sierra have found front-country streams (at the trailhead) that have virtually no contamination, while some streams far from the trailhead and not frequented by humans or pack animals have a high concentration of biological contaminants. Some backcountry users take no precautions and do not get sick, while others diligently use filters and chemical purifiers and get extremely sick. The most common thread for those who come down with digestive problems appears to be, not contaminated water, but carelessness in basic sanitation, particularly diligent washing and sterilizing of hands when handling food.

The situation is different in Third World countries. In tropical climates, especially, the abundance of wildlife living in potential water sources and the poor sanitation practices of local populations mean that there are many varieties of bacteria, viruses, and parasites that are unknown in colder climes, and against which those of us who live in North America have developed no resistance. 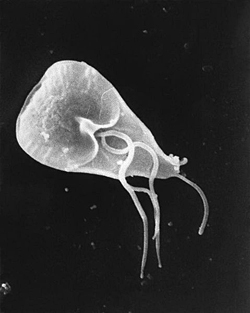 The giardia parasite, a biological contaminant found in some water sources. (image: Centers for Disease Control and Prevention)

The biological contaminants are generally grouped into parasites (or protozoa), bacteria, and viruses. Protozoa are the largest at about 1 micron, bacteria measure approximately 0.5 to 2 microns, and viruses measure around 0.02 - 0.3 microns.

The most infamous villain of backcountry water is the dreaded giardiasis, caused by the parasite giardia lamblia. Giardiasis was known among the pioneers and trappers as “beaver fever,” since it was often associated with beaver ponds. This emphasizes the fact that biological contaminants in water come not only from human activity, but also from animals that live in the wilderness, as well as pack animals and domesticated animals that graze in such areas (sheep, goats, and cattle, among others). Some plant materials (certain algae in particular) can produce physical symptoms.

In areas where sanitation practices are poor, sewage seepage and runoff often include the organisms that cause cholera, hepatitis, and other diseases, along with a large variety of viruses.

Illness from biota can appear quickly, though most frequently, it takes several days for bacteria, viruses, and parasites to reproduce sufficiently to produce nausea, headaches, vomiting, and diarrhea. This delay in the appearance of symptoms often leads people to believe that they got away with drinking untreated water, and that the symptoms are due to something else not associated with their weekend trip. 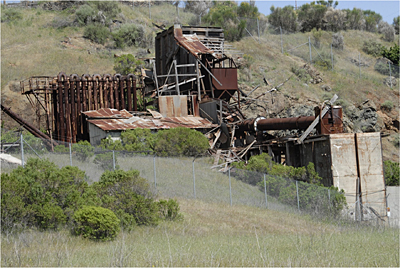 Heavy metal compounds and chemicals from abandoned mines can seep into water sources. (photo: B. Straka)

Chemical contaminants can come from man-made or natural sources. Most common are man-made sources such as industrial and agricultural runoff. There are many “backcountry” areas that are affected by such runoff into water sources. For example, mining operations took place throughout much of the Sierra Nevada and Rocky Mountains, resulting in seepage of heavy metal compounds and chemicals used in leeching operations.

There was extensive mercury mining in the Santa Cruz Mountains until the 1960s. In the Almaden Valley, many streams are posted to warn fishermen not to eat any fish (see image below), because of the high concentrations of mercury in the fish in those streams. You should be aware of your water sources before going into any area, so you can prepare accordingly.

Illness due to chemical contamination may be rapid, but more often is a very long-term problem. Heavy metals, such as mercury or selenium (found in areas of agricultural runoff), sometimes take several years of continual use of the contaminated water to show up. 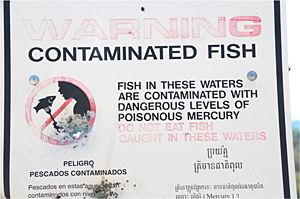 Turbidity—caused by the presence of silt, glacial flour, or volcanic ash in the water—is more of an aesthetic issue than a health issue. However, the presence of such fine particulate matter will quickly clog filters and slow the action of chemical purifiers.

Other areas may have “sulfur springs,” where the water has a high content of sulfur compounds. Sulfur compounds in the water can be partially removed by boiling or by allowing the water to sit in an open container to allow the dissolved gases to escape.

In some cases the available water may be highly saline. This includes ocean sailing trips or trips to offshore islands where your party is dropped off and later picked up. This article does not cover desalination.

The author writes, "For example, studies in the Sierra have found front-country streams (at the trailhead) that have virtually no contamination, while some streams far from the trailhead and not frequented by humans or pack animals have a high concentration of biological contaminants."

It would be nice if the author provided citations for those studies. For example, one study I am familiar with sampled animal stools along the trail, found microbial contaminates (not surprising), and concluded that the stream water couldn't be trusted. Pretty poor study in my opinion.

Ska-T,
The article (series) was long as it is, and not intended as a complete scholarly article. However, you can easily find the articles in a quick Google search. One obvious place with lots of citations is the wikipedia article - http://en.wikipedia.org/wiki/Potability_of_backcountry_water

A more scholarly look that is on the web is in publications of the Wilderness Medicine Society. This article http://www.wemjournal.org/wmsonline/?request=get-document&issn=1080-6032&volume=015&issue=04&page=0235 covers a lot of the ground.

The following is from Welch's article -


It might well be argued that it “couldn't hurt,” even if universal water treatment were unnecessary. This attitude, unfortunately, overlooks a major issue in wilderness education and human nature. The public's attention span for health advice is not limitless. If our objective is to protect the backcountry user from enteric infection, then we should emphasize the overwhelming evidence showing that assiduous hand-washing or using alcohol-based hand cleansers is by far the most important strategy. It must be impressed upon backpackers (just as it is impressed upon health care, food industry, and daycare workers) that stopping hand-to-mouth spread is the key to preventing gastrointestinal infection. Diluting this message with unfounded concerns about wilderness water quality or the relative merits of various water-treatment methods serves no useful purpose.

However, these go way beyond the aim of my series.

Thanks for the info, Bill.

I'll add a brief notation if possible within the article linking to these for more info.