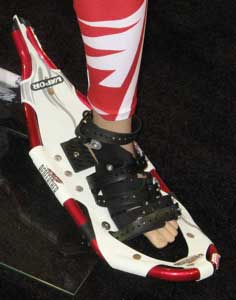 Redfeather's Vapor will debut in September at $249.

Snowshoes are one of the hottest gear categories this year -- we're seeing it in our site traffic and manufacturers are seeing it in steadily rising demand despite the slow economy.

I stopped by Redfeather's booth at Winter Market '10 and struck up a conversation with marketing coordinator Josh Hessler, who told me that growing numbers of athletes are turning to snowshoes for high-energy winter workouts. One of Redfeather's latest models, an ultralight running snowshoe called the Vapor, is coming out later this year to meet that demand.

Winter athletes have also motivated Crescent Moon, where founder Jake Thamm has made a career out of building better bindings, to develop a snowshoe with no bindings at all -- the shoe (called the Blank, appropriately enough) comes with a kit that allows runners to attach their running shoes directly to the Blank's deck.

Thamm told me Friday afternoon that Crescent Moon's Gold 10 Series -- a hefty 32-inch backcountry shoe -- has been the company's best seller of late, which he sees as a hopeful sign: growing numbers of snowshoers are venturing away from the trails and out into the deep stuff.

We've also learned in our OR travels that state parks are seeing surging attendance as people seek out low-cost vacations. Snowshoes' popularity may well reflect the same economic forces -- they represent cheap recreation compared to skiing, snowboarding, or winter camping.

It's nice to see snowshoes making waves in an industry dominated by speed sports. Those of us who hike know taking it slow guarantees a better view.