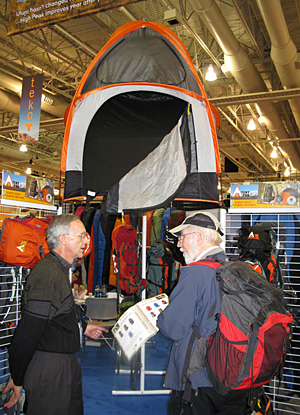 Mike Bench (left) of TentPak explains the line to Bill.

My most intriguing gear discussion on Thursday (Day One) was with TentPak, a company that makes 12 models of a combined tent and pack. Well, that’s an interesting way to describe it, but not quite accurate. What TentPak has done is devised a way of marrying an existing two-person tent with an existing pack.

The two tents, a 3-season (H Series; two poles) and a 4-season (E Series; three poles), are quite nice tents, with aluminum poles. Both two-person tents have a fly made of polyurethane-coated ripstop nylon that provides a reasonable vestibule. I would actually call the 4-season tent a convertible 3-season, but the industry trend is to call tents with lots of mesh that can be covered by a zip flap 4-season. The North American Hunting Club goes along with TentPak's 3- and 4-season designations and gives them their field tested seal of approval.

The pack capacities range from 45 liters to 80 liters, with a 75+10 liter model on the way. The line includes women-specific models, with changes in the waist and shoulder straps (along with the usual colors designed to appeal more to women). 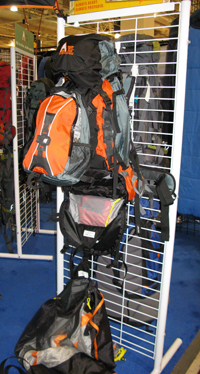 The packs themselves have several interesting features. Two entry-level models, the Phantom 45 and Luna 45, include a 20-degree sleeping bags. Several models have a removable auxiliary pack that is just right for a sizable emergency kit or day pack.

One of the main target audiences for these packs is Boy Scout and Girl Scout troops. These packs also would work well for adult leaders, who need to carry the removable first aid kit (for those incidents that result from an exuberance of youth). Another target audience is search-and-rescue organizations, for which the removable emergency kit also would be very appropriate. The zipper arrangement lends itself well to that type of usage on some of the packs, though most in the lineup are top-loader only. The shoulder straps are more readily and easily adjustable for torso length than the vast majority of packs out there. 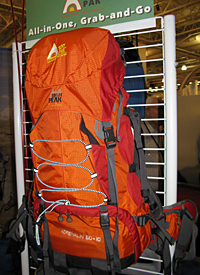 TentPak packs and tents are made by High Peak, the brand name of Germany's Simex Sports, with TentPak doing the modifications.

Overall, TentPak has an interesting series of packs with an interesting system for integrating pack and tent, and is well worth considering. Of course, the real test of any pack or tent is in the actual usage. And not all packs fit every backcountry traveler. Hopefully, we will have the opportunity to test the TentPak system ourselves to see how the concept works in practice.

What did you think of the JakPak at OR? Did you see that all-in-one?

I'll go ahead and admit that when I saw the words "TentPak," I thought of not even going to the booth to see it. "Oh no...another combo thingie," I figured. But Bill was interested, so I figured it was worth joining him for a look.

Now neither of us have tested a TentPak out, but we were both pleasantly surprised by what we saw. It wasn't some jerry-rigged contraption, but real packs with real tents. They're on the heavier side, so not for everyone, but they're aimed more at Scouts for ease of use and affordability. The family that started selling them have been heavily involved in Scouting. We'll most likely be testing one out.

As for the JakPak, Tom and I stopped by there one morning (Tom even got inside one). The design of this came from a very different avenue though, originally aimed for the homeless who can't carry around a tent or might have blankets and the like stolen.

They introduced it last year, but changed the materials this year, so it is more breathable due to past condensation issues. Also, it has a use for emergencies. One nice thing they told me is that they're trying to get their extra product down to Haiti.

I have to go hmmmmmm again....Just want to see it in work.

As mentioned, the TentPak people have a Scouting background. This combination package is one way to get several items of gear in a single package that integrates well together. Look back over just the past few months in Trailspace - questions from beginners about "how do I fit it all in my pack" are common, as are "where do I start?" Scouts generally are just getting into the camping and backpacking, and the boys and girls are growing rapidly. I didn't make it as clear as I could have, but the packs have a well-thought-out adjustment system that will allow a growing kid to use the pack for more than one season, potentially all the way through his/her Scouting career of 5 to 8 years, maybe even into adulthood. The packs appear to be of high quality, as do the tents. Note, though, I did say that I feel that the "4-season" tent is really a 3-season (or maybe 3 and a half season).

One experience I have personally had with youth is that they have a strong tendency to leave things out (or in one case, even take something vital out as they leave the front door of their home). By attaching the tent to the pack inside the sleeping bag compartment and allowing enough room to have tent, fly, and sleeping bag in that compartment, along with a dedicated place for the poles and pegs, it is much more likely that everything vital will get out on the hike and home again.To me, the combination making things harder to forget or misplace (especially in the case of youth) is a strong point, particularly when you do not sacrifice function.

Another point is that this gives a combined package of the important items needed besides clothing and eating/cooking gear, with everything fitting nicely together. I don't know that you could say that the combined weight is less than the separate weights. After all, you can buy both tent and pack separately. Maybe a few ounces, since the sleeping bag compartment with clip obviates having the additional stuff sack. All 3 items, for those packages having pack, sleeping bag, and tent (or both, for those with only pack and tent) are on the light end of the scale, compared to packs and tents from other companies.