Outdoor Retailer: Snapshots from the show

We've reached the end of Day Two at Outdoor Retailer, which means we're halfway through this winter's gearapalooza. If this was a cheesy outdoor metaphor I'd say something like, we've reached the summit, but we still have the all-important trek back down before we start celebrating.

But it's not, so I'll just share some snapshots and comments from the past two days. 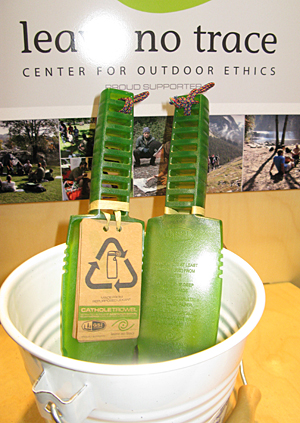 GSI Outdoors has a Leave No Trace Cathole Trowel with imprinted instructions that tell you how to dig a proper hole in the woods, in case you forgot (do it 70 paces from water, dig 6-8" deep and 4-6" wide, etc.). The trowel is made from repurposed Lexan. So old BPA-laden waterbottles can gain a new life digging holes in the woods. The trowels will retail for $5 this spring; One percent of sales go to LNT. 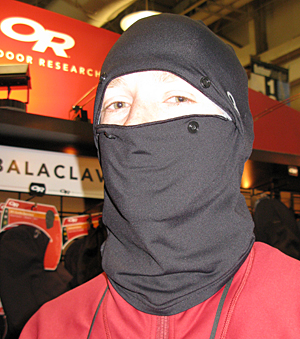 Christian Folk of Outdoor Research modeled the Shapeshifter balaclava, which can be worn three different ways. OR also has some excellent looking ice and backcountry gloves coming for winter 2010-11, though women will have to wait till 2011 for their own ice gloves. In the meantime, Christian personally suggests they check out the Stormtracker. 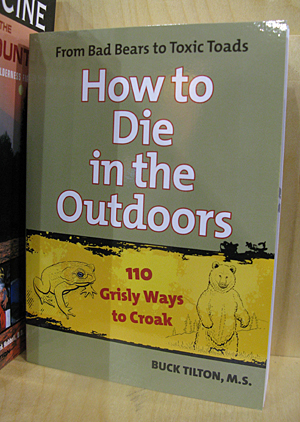 I believe you can find an outdoor book on pretty much any subject at Outdoor Retailer. 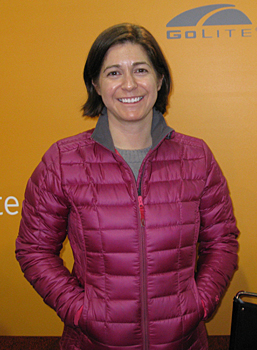 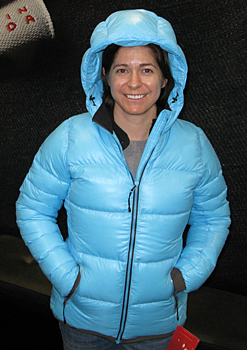 What's winter without insulation? The answer: cold. Even in the middle of an indoor tradeshow I'm happy to try on some soft, puffy insulation. GoLite (left) has the Demery Canyon, an 800 fill down jacket (shown) and anorak, as well as a synthetic version, the Cross Canyon. Westcomb (right) is introducing its very first down pieces, the Chilco Hoody with 850 fill, and a sweater version for layering. 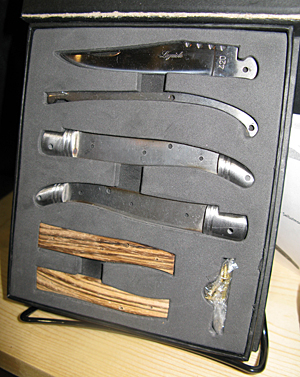 "Smell the knife," I was instructed at the Baladeo booth. It wasn't a macabre order, but a comment on the hickory handle of several Laguiole-style knives. In addition to various outdoor knives, tools, and cutlery, the French brand also sells a make-your-own knife kit, that you could use as a template for your own handle. 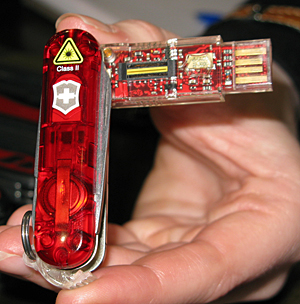 Okay, it's not an outdoor multi-tool, but the Victorinox Presentation Master is still pretty cool. See that shiny bar? It's for fingerprint recognition as a security feature to protect all that data on the USB. (It also has a laser pointer and Bluetooth remote.) Victorinox told me that at the Consumer Electronics Show earlier this month, the company gave hackers a $100,000 challenge and two hours to try and hack through their security. None did. The Presentation Master will be available in early-April. Price range: approximately $100-$300 for the 8G, 16G, or 32G. 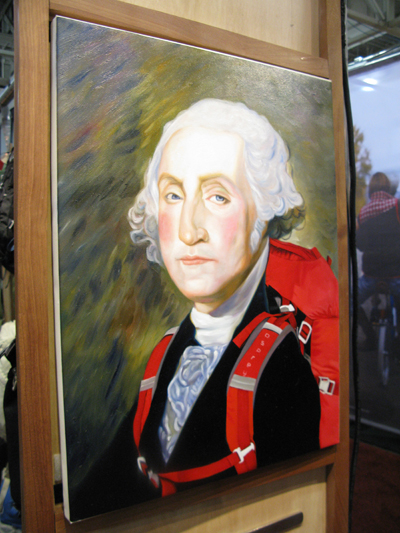 Little known fact....The duel between Hamilton and Burr was really over who made the best backpack. It seems the Federalists liked Osprey.

On a serious note I was wondering if LNT had a presence there, how much do those trowels weigh? Be nice if they made one with a hollow waterproof handle to store TP in.

The quote Christian folk or OR look more muslim in that garb.

Wouldn't diggin a cat hole leave a bump on the ground and wouldn't that fertiliser be a "trace"? I thought they wanted you to pack it out...

Trout, yes, LNT and a host of other non-profits (Sierra Club, American Alpine Club, Access Fund, Big City Mountaineers, NCPA, etc) have a presence at OR, usually a small booth or table. It's an excellent opportunity for organizations like that to bring on new supporters and members. FYI, we're an LNT partner, among others.

The trowel above doesn't have a space for TP, however the Sea to Summit iPood one has space in its handle for just a few sheets. However, I was given one of these and don't think I've ever used the handle to hold TP.

Jim, in most circumstances LNT encourages a proper cathole, though there are special circumstances when you are required to pack it all out. You can read their suggestions for proper human waste disposal on their site.

We'll actually have a whole article on this topic in spring. Let's just say my working title for it isn't fit for the site.

Thanks for the compliment, Will! They were super comfy. I admit that I coveted.