Your Trailspace roving reporters are back home, digesting and summarizing our last observations from Outdoor Retailer. I will be adding information on a number of companies I visited on the last two days, but thought I would add a comment on the return drive, since more wilderness wanderers by far die on the drive home than in the wilderness. 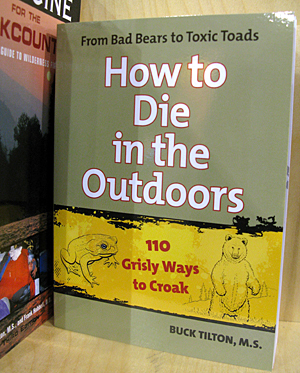 Alicia showed the cover of Buck Tilton's new book How to Die in the Outdoors: 110 Grisly Ways to Croak. Considering some of the discussions on Trailspace about the dangers of the woods and hills, I highly recommend Buck's book. Like many of his books, it has a lot of humor, under which is a very serious message.

We had a series of storms through the West during the week of the show. Avalanche danger in the backcountry was Extreme (the most dangerous rating). At these times, my Salt Lake friends like Brian in SLC who posts here occasionally say "Good day to ski at the resort." Even the resorts can be dangerous, with several people caught in avalanches in Utah and Colorado during this series of storms. Despite the warnings and reports of serious avalanches occuring in the Wasatch (the mountains at whose foot Salt Lake lies), several snowmobilers and skiers went out anyway and were caught, including one man, an experienced backcountry skier, who died. His friends had refused to go with him.

My return drive to California was on relatively dry pavement on Sunday afternoon, with some blowing snow. When I awoke Monday morning in Elko, the roads were covered with a light dusting, though the radar images that my Weatherman son's personalized website provided showed I was heading into the Howl of the Teething Gail (Feghoot fans will recognize this one). No need for 4WD. Shortly after passing Battle Mountain (Armpit of the Universe, according to one New York newspaper), the road surface looked strange, although looking dry with a little blowing snow. Up ahead, I saw some flashy lights on the opposite interstate roadway, then felt a slightly squirrely motion. Hmmmm, glare ice or black ice as it is variously termed. So engage the 4WD and drop to a low speed.

As I got within a quarter mile, the flashy lights resolved into an 18-wheeler pointing the wrong way. I could soon see a Lincoln Towncar off the road on my side and tracks from the 18-wheeler going off the left from my lane through the median and up onto the opposite roadway — great job and great skill by the driver to keep it upright. The lights were the Nevada trooper parked in front of him. Another quarter mile brought an F350 sideways in the median (slid from my side), and then a jack knifed 18-wheeler with the trailer off into the median, all this within about a mile. Icy roads can appear dry, folks. Things dried out by the time I reached Winnemucca, but snowshowers began in earnest soon after Lovelock. From Reno to Truckee was rain, then at Donner Summit, it was heavy snow with low visibility most of the way to Auburn. More excitement than I really wanted, but I did arrive safely.

Buck's book quotes Jean Anouilh at the start of his Introduction — "Man dies when he wants, as he wants, of what he chooses."

I choose not to die on the road of my carelessness. Be safe out there, whether it is on the road or in the woods and hills.