An interesting device that has been around for a while as a complex and very large instrument in hospitals and emergency rooms is the blood oxygen saturation meter. A small fingertip version has been available for mountaineers and small plane pilots for a few years, but at a rather high price ($400-500 or more). But now several start-ups have appeared with models at a less exorbitant price (in the $200 and less ranges), with several companies exhibiting at the recent OR show. 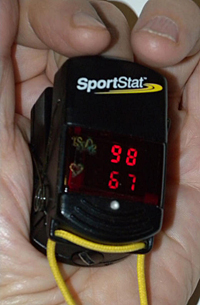 While I do not expect to see every backpacker carrying one of these units in the near future, those of us with Wilderness First Aid (WFA) and Wilderness First Responder (WFR) training may want to add them to our field kits, particularly if we are with groups.

To use, these little meters are placed on a fingertip (usually the left hand) to give a continuous readout of pulse rate and blood oxygen saturation. Typically a healthy person has a resting pulse rate in the 50-75 beats per minute range (fit athletes at the low end) and a saturation in the high 90% range.

In the photo at right, I am using a Nonin SportStat, which indicates my oxygen saturation level of 98% (typical for sea level for healthy people) and a pulse of 67 beats per minute (I guess I was excited at taking the photo, since my waking pulse rate is typically around 47-51 bpm).

The new instruments are about twice the diameter of your thumb and the length of the first joint of your thumb. They weigh less than an ounce with the one or two AAA cells. Since they work by sending a beam of light through the thumb, the measurements are quite accurate and easier than searching for a pulse beat. A trained WFA or WFR knows that even with such an instrument, the feel of the pulse is also an important diagnostic. 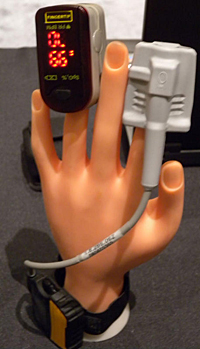 An example of the new generation of "pulse-ox meters" at the show was shown by a company called MedChoice, based in Beijing. The photo at right shows two of their instruments, with the fingertip unit (MD300C2) on the finger of the dummy hand giving a reading of 99% oxygen saturation and pulse of 70 (this was a non-working display unit, normally the unit is read with the fingertips pointing toward the reader).

The other unit (MD300W, for the wrist) has the display on the part on the wrist. It also stores the pulse and oxygen information for later review, for example for an athlete or for analyzing sleep apnea (which happens at altitude for many people and is referred to as Cheyne-Stokes breathing).

Interestingly, when I tried one of MedChoice's working units, I had a blood oxygen saturation level of 97% and pulse of 69 bpm, pretty good for a sea-level dweller at the Salt Lake City altitude of about 4,500 feet MSL. Most people drop to about 90 to 95%, with a slightly elevated pulse until they have been in Salt Lake for a week or two.

A caution, though, for the user unfamiliar with what oxygen saturation means. Oxygen saturation is the percentage of your hemoglobin (in the red blood cells) that is saturated with oxygen, not a measure of the absolute of oxygen in your blood. It takes a while for your red cell count to build as part of the acclimatization process.

While these new units are unlikely to end up in the pack of every hiker and backpacker, they are worth consideration for the Wilderness First Responder, mountaineer, and leader of large groups.

Some insight from someone who has used these in the EMS field. They are a very neat little device which can save some time in emergency situations but as any good EMS worker knows, you never completely trust machines. I personally don't think these would be enough benefit to backpackers to justify the cost and here's why. It measures pulse and blood oxygen levels... a pulse can just as easily be obtained with fingers and a watch, both of which most people have with them already. The device measures O2 saturation by the light through the finger method, basically using color to determine the levels. Cyanosis (turning blueish) of the lips is one of the first signs of lack of O2 and a respiration rate can be determined like a pulse, with a watch and counting breaths. Bottom line, if a person has a low enough O2 saturation to worry about, unless you are carrying a bottle of O2 with you there isn't much you can do for them. I assume here that most people when winded and out of breath will stop until they catch their breath. The human body knows when it has a problem and will let you know when it needs something. Basic first aid courses will teach you what you need to know without the fancy machines. IMO if you want to spend the money on med equipment, there are much more useful things to bring than a pulse-ox.

Without proper expertise and other equipment, having a pulse oximeter around is kinda pointless. I guess if you're carrying an entire field hospital, these'd be part of the kit, but....

If you don't know, and understand the intricacies of, oxyhemoglobin dissociation curves, and of the machines themselves, they're no better than asking someone if they feel winded. These things are NOT infallible.

Having said that, in the hands of a properly trained responder, a pulse ox could potentially provide a bit of persuasive information--in convincing someone they really SHOULD come down off the mountain, for instance.

While these new units are unlikely to end up in the pack of every hiker and backpacker, they are worth consideration for the Wilderness First Responder, mountaineer, and leader of large groups.

Agreed Bill :) They are a very handy device for EMS and I would assume the WFR would have the associated medical equipment to make a pulse ox worthwhile. Just wanted to point out that the average hiker/backpacker would not have those supplies, thus making the pulse ox nothing more than an expensive toy to the majority of them. I'd rather not see folks spend good money on something they aren't going to get much if any benefit from, just because they thought it did something special that couldn't be done any other way. :) Another point to bring up for those who are thinking about getting one, their performance is effected by cold fingers and poor circulation, causing them to give false readings. CO poisoning will also cause a false reading in them. If you get one make sure you understand their limitations and capabilities fully.

... If you get one make sure you understand their limitations and capabilities fully.

That's the fundamental for any piece of gear, whether something a simple as boots or sleeping bag or as complex as a pulse-ox, avy airbag, or GPSR. Hopefully, Trailspace is getting at least some of that info to its readers (we try).

As an EMT getting an O2 stat is one of the first things that we do. It can actually tell us a lot about the patient that would otherwise go unnoticed. Many patients do not know that they have low oxygen, they just know that they don't feel right. They are very simple to use, they just spit out a number up to 100, most people would get a 99 or 100, someone with chest congestion might get a 96 and then around 94 its time to be a little concerned. As for the part about cold fingers, the only way that it would be affected would be if the finger was frost bitten, in which case the oxygen would not be properly perfusing to that finger. As for CO poisoning, that sould not really ever happen in the wilderness, we can hope at least. Not that I am recomending that they become part of all backcountry first aid kits, because I am certainly not going to drop the money on one for myself. But they certainly could help some one decide to stop instead of pusing through the difficulty and causing harm.

Also one of the $45 ones is not going to work well, if any one does buy one make sure to do some research.

As for CO poisoning, that sould not really ever happen in the wilderness, we can hope at least.

I wonder how many times people get CO poisoning, even if mild, from using stoves and such in non ventilated tents. Most of them probably don't even know it.

Also, because these just measure how many beats per minute for the pulse, and not the strength and regularity, they do not replace taking the pulse by hand. If someone has a bounding pulse and they are skipping every other beat the pulse-ox will not measure that, which could be very dangerous.

I actually did not think about that, I wonder how clean those fuels burn?

At anything over 10,000 ft, essentially no one who is not on bottled oxygen is more than 95%, most under 90%. Even at sea level, few people show over 98%, unless on bottled oxygen or "pressure breathing". I and some of my partners have gotten 98% at 17,000 ft on Denali (absolute pressure is more nearly like 19,000 ft, since it is about 63 deg N) by pressure breathing (a technique well known to high altitude climbers), but even most acclimatized people at that altitude range in the 80% or below. Remember that the absolute pressure is approximately half the sea level value at 18,000 ft (that is, around 500 millibars).

Also, gdurheim is correct that at altitude and in very cold conditions, the body starts shutting down or restricting circulation to the extremities in order to keep the core temperature up, long before frostbite sets in. That's why, in the med tent on Denali for example, the doctors make sure the person is warm before checking oxygen saturation.

...at altitude and in very cold conditions, the body starts shutting down or restricting circulation to the extremities in order to keep the core temperature up.

Hypothermia will cause the same thing at any altitude. :)

I still say spend the money on a WFA course before you go and buy one of these, it'll be much more useful in the long run.

Hmmm ... should have made the order "in very cold conditions and at altitude.." Then it would have been clear that I was referring to hypothermia (or incipient, early hypothermia).