With the heavy snows in the Utah and Colorado backcountry, the resulting significant avalanches, and multiple snowmobiler, snowboarder, and backcountry skier burials (plus an in-bounds skier burial), some fatal, the new avalanche beacons are of great interest.

The three primary avalanche beacon manufacturers I talked to at Outdoor Retailer were Ortovox, BCA, and Pieps. Together, these three companies account for a majority of the sales of beacons out there. My analog Ortovox F1, top of the line a few years ago, looks hopelessly primitive by comparison to the new digital, three-antenna devices. 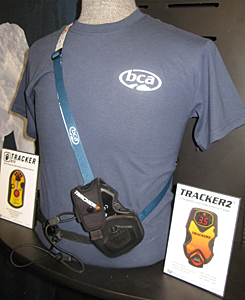 The major reason for the change to digital technology has been to make the search function much easier than with the old analog units. With the old units, it was necessary to do a grid search through initial acquisition, through a finer search to the final pinpoint search (still necessary until initial reception of the signal from the buried beacon). Range was indicated by the signal strength as heard as a beeping sound.

When two-antenna systems were developed, the technique of following the flux-lines was developed. But it was still dependent on judging the sound. The early digital systems were able to give direction and distance, but produced confusion for users who did not practice frequently. In addition, since the transmitted signal still came from a single antenna, the signal could appear to drop out if the transmitting (buried) beacon was not parallel to the receiving beacon (searchers often tend to turn the beacon in their hands in the stress of the search).

New beacons from Ortovox, BCA, and Pieps all have three antennas, with several models from each. This, combined with the three antennas used in the receiver, reduces the dropout problems. In addition, when within a few meters of the buried transmitting beacon, the directional arrows switch off, eliminating the directional confusion caused by the arrows switching through short distance changes (or the trick no one ever remembers in an actual search of covering the blinking arrows).

The result is that searches for the new school beacons with new school beacons is much faster (see the Canadian Ski Patrol's test below). Add to that the indications of multiple burials and the ability to flag "found" transmitters. The all-digital units have a maximum range of 40 meters, compared to the old analog units 60-80 meters. While acquisition is earlier for the analog units, the pinpoint time overall is faster with the digital units, especially for users with low experience and practice. 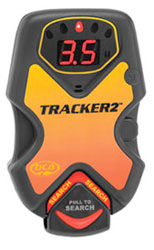 The photo of the new BCA Tracker 2 beacon ($335) shows another feature — switching from transmit to receive/search mode is much more positive. BCA claims an acquisition distance of 50-60 m, but recommends a 20 m search width (this implies to me that the practical acquisition is still 40 m, though it allows for burial depth). The Ortovox beacons have a similar indication of transmit vs receive/search mode as well.

Ortovox continues the classic F1 ($249) for long-time users who stay practiced (like me and others who like the longer reception range), and will introduce a new digital version of the Patroller ($299), an improved and digital version for professional ski patrollers. The S1 ($499), which shows a visual map of distance and direction of multiple burials has been upgraded.

In September, the 3+ ($349) will be introduced with a number of improvements, including Smart Antenna which switches the transmit antenna to the one of the three most nearly horizontal. Ortovox has also added several new shovels with several design improvements over earlier shovels (such as lighter weight for greater strength). 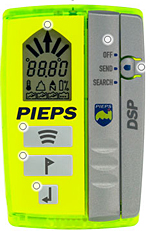 The Pieps DSP ($450, or $550 for an Advanced version), like the BCA Tracker 2, is claimed to have an acquisition distance of 60 m, though tests by some of my ski patrol friends of early units indicate that, like other digital units, 40 m is the number to count on. Like the BCA and Ortovox, multiple burials are indicated, with the ability to search for the nearest, flag it, and move on to the next closest one.

A unique feature is that the software is upgradable. Ortovox is also introducing this capability. Pieps also has introduced a lightweight (110 grams) Freeride version ($199) with a single antenna, but digital capabilities, for the "side country and resort skier" who ventures slightly off the beaten path. Personally, if I were "side-country or resort skier," venturing off the "beaten path," I would spend the extra bucks to have a more capable unit.

The Canadian Ski Patrol conducted a transceiver test to asses the new three-antenna transceivers in the fall of 2009. The results showed only a small difference in the search times of experienced guides using the new models, with the Ortovox D3 being the fastest and the F1 the slowest.

However, when 15 novice high school students with no transceiver experience were tested, all were able to find all targets with the new transceivers within seven minutes, but only two out of three succeeded with the older unit, the Ortovox F1.

The full report, 2009 Transceiver Test (PDF), can be downloaded.