Mountain pine beetles have devastated forests from Colorado to Canada over the past decade, but this year the trees aren't the only species at risk.

The pine beetle epidemic has killed or weakened millions of trees that might be toppled by high winds or storms, threatening roads, campsites, power lines, and people. Last month the U.S. Service outlined the dangers in a bulletin headlined "Watch Out! Beetle–Killed and Green Trees are Falling Across Roads and Trails." Recreation areas in the Northern Rockies with high concentrations of infested pines may be subject to campground and trail closures -- call the nearest Forest Service station before setting out.

Hot, dry weather in the Northern Rockies early in this decade reduced the pines' defenses against the beetles, which are a natural part of the ecosystem. Like wildfires, they carpet-bomb a forest, which then grows back better equipped to fight them off.

There's some consolation in knowing the mountain pine beetles are merely responding to changes in their environment. The far more insidious threat comes from imported pests like the famed gypsy moth and high-jumping Asian carp that has taken over the upper Mississippi River system. Killing them off is nearly impossible; often the best we can do is limit their spread.

One of the most basic ways campers and hikers can do that is to buy their firewood locally and burn it locally -- preferably at the same park -- and to leave any unburned firewood at their campsite. That way creatures like the Emerald Ash Borer, which threatens ash trees across the Midwest and Northeast, can't hitch a ride on a bundle of cut ash.

In Maine, where Trailspace is based, the state Legislature has banned the import of firewood into the state. "Many new infestations center around campgrounds, implicating camp firewood in this insect’s spread," the state department of forestry warns on its guide to invasive species.

The National Parks Service issued these tips for fighting the spread of invasive species:

Need more facts on invasive species? Check out these links:

Non-native pests do the most damage and are the most difficult to get rid of, so it's incumbent on all of us to practice deep-woods damage control.

Fore some reason The "New World" seems way more susceptible to invasive species from Europe, Asia and Africa than vice-versa. Weeds, animals and others seem to flock here to create mayhem and practically nothing from here (except snow berries) seems to infest the "Old World." Its not fair ( I sound like I'm nine).

I wish something awesome like citrus trees or avocados would infest us instead.

I'd never thought of that before ... is there any research backing that up?

Here in California when they bring in equipment to fight fires they set up wash stations to clean the equipment before it gets deployed. I can't imagine how easy it would be for some flora and fauna to take root after a Forest Fire has cleared the way.

There is a place in our local mountains (San Gabriel Mountains above Los Angeles) I have been day hiking for over three decades. Recently I saw a new sign at the trail entrance informing fisherman how to handle wet gear and their catch, to preclude spreading a non resident snail. I found this very odd, since the creek never had a resident fish population, or this suspect snail. You would think the best environmental practice in this instance would be not planting fish in the creek.
Ed

Ed: sometimes the warnings cast a wide net to get the word out ... for instance Maine is warning of a bug that to date has not been sighted within the state's borders -- the concern is it could have nasty effects on the state's maple syrup industry so they want everybody to know about it even if it does not exist at the point where the warning is posted.

Hits close to home...... See my avatar? Most of the trees in that pic are gone.

NPR had a story on bark beetles this morning. The audio should be up at the link below later today:

The pine bark beetle has an appetite for destruction; it's responsible for the largest-known insect infestation in North American history. Host Scott Simon speaks to Richard Hofstetter, an entomologist at Northern Arizona University who's experimenting with driving away large populations of the pests by scrambling their sounds to disrupt mating patterns.

Tom - thanks for writing this one up. Haven't put up pictures from the last couple of hikes... but the beetle kill here in SW Montana is horrible. Some areas have seen up to 70-80% of standing trees affected (killed).

We are waiting for the fires. When it starts, it will be devastating to many ranges around here. Some will be wiped clean of any trees.

The NPR story is fascinating. Among other "fixes" being tried around here are chemical patches being attached to vulnerable trees (think 4x4" patch... stapled to the trunk). What I have heard from a friend who is retired FS is that we just need a good and hard winter, which hasn't happened in a few years.

I'll try to get those photos up soon... very sobering.

I've heard some grumbling from The Usual Suspects about environmentalists fighting any attempt to remove old trees from forests even when it would do some good.

I saw numerous references to how the forests were overgrown with these big trees that are the most susceptible to the beetles -- so maybe there's something to those complaints, but I can't help wondering whether there is a cost-effective, safe and profitable way to go into a forest and cut only a few trees while leaving everything nearby unscathed.

Fore some reason The "New World" seems way more susceptible to invasive species from Europe, Asia and Africa than vice-versa. Weeds, animals and others seem to flock here to create mayhem and practically nothing from here (except snow berries) seems to infest the "Old World." Its not fair ( I sound like I'm nine).

I wish something awesome like citrus trees or avocados would infest us instead.

See the book "Ecological Imperialism: The Biological Expansion of Europe, 900-1900" by Alfred Crosby.

However there are a number of Asian plant species, including the beach rose and the knotweeds, that are considered invasive here in Norway.

Good point BigRed. Also the Guns Germs and Steel book/vidoes also detail this phenomenon. But I think the "Ecological Imperialism" author makes a better point about diseases than he does about weeds and insect invaders.

I even get the impression that the author writes to counter a percieved "cultural superiority" once thought to belong to Western Culture which has come to dominate the world. He gives credit to disease and other invasive species, rather than some sort of European superiority for doing much of the work of New World conquest. I do agree though, that the geographic isolation of the Americas combined with very little to no domestication of wild animals led to the Americas being easy pickings for the much more cosmopolitan weeds, pests and diseases of the "Old World."

Either way, I am not convinced that there is a good way to put the invasive "genie" back in the bottle. The only thing we can do though is slow down their inevitable march across the continent. One really good way to do this is to find out what controls them back in their native country and introduce that agent to fight on our side. It sounds like swallowing a spider to catch a fly but, when properly "starvation" tested, biological control can help lessen the blow from invasive species.

Here in the Appalachians (and across the eastern US) the impact of the Woolly Adelgid on the Eastern Hemlock is sickening.

The Eastern Hemlock was just a few short years ago a cornerstone in the grand mixed evergreen/deciduous forests. They provided a dense upper-story cover interspersed in the more open canopy of nearly all the other native trees. These stands of Hemlock provided deeper shade and much cooler conditions in the under-story, especially in deep ravines and drainages.

But now virtually all that remains are vast skeletal graveyards of the once towering trees. The emerald depths of shade are gone. The streams are warmer, and the lush plants that once thrived in the coolness have withered back into the deepest glens and fells. 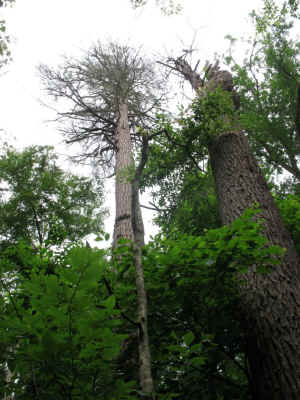 It breaks my heart to see the king of the Appalachians dead and broken this way.

(The images and video above are from http://www.nativetreesociety.org/tsuga/finale/tsuga_search_finale.htm )

I used to think it was a really bad deal. But now think it is just nature doing it's thing.

I know what you mean. On one hand I feel the same way- these cycles of death and renewal are nothing new at all. On the other, it is hard to see something so noble, beautiful, and stately destroyed and fade from the landscape. When I go places I know, and it is so changed, it feels like I have lost friend. I know it sounds silly, but I know the hemlock almost like I know a person, it has a distinct character and quality that is unlike any other.

Okay....... As a kid I had a great big dead pine who had grown out of granite as a spiritual partner. I thought much and still do about the life it had lived and all it had seen. That tree was huge and the cracks in it enormous. It had been burned in a fire but to this day can not figure out how fire ever reached it over an enormous expanse of granite.

I don't know what it is about really big trees, but they do have an uncanny charisma -- old-growth redwoods especially. I always feel like I'm in church when I'm among them.

While I can't help nodding in agreement with noddlehead's "this is just nature taking its course" line of thinking, I get the willies when I think about the invasive pest that's gonna go through our species someday. It seems like the more we mess w/nature's way of doing things, the more likely it'll be that we'll somehow turn this pest loose.

Thought it interesting no one mentioned: Invasive Species: Man.

I've walked about 1,400 miles of Appalachian Trail and have positively identified only ONE Old Growth Tree and it is the Keffer Oak, in Virginia. I don't love this photo but it is one of the few that give a sense of the impression it can make: http://www.whiteblaze.net/forum/vbg/showimage.php?i=38422&c=

Thought it interesting no one mentioned: Invasive Species: Man.

I've walked about 1,400 miles of Appalachian Trail and have positively identified only ONE Old Growth Tree and it is the Keffer Oak, in Virginia. I don't love this photo but it is one of the few that give a sense of the impression it can make: http://www.whiteblaze.net/forum/vbg/showimage.php?i=38422&c=

Was it on the Walton's property?