A dog's life on the trail just keeps getting better, judging from the canine backcountry gear at Outdoor Retailer Summer Market 2010. Two of the most interesting companies -- PeakWaggers and D-fa Dogs -- are scrappy newcomers with clever approaches. Stalwarts like Granite Gear, however, are also bringing new gear to the show. 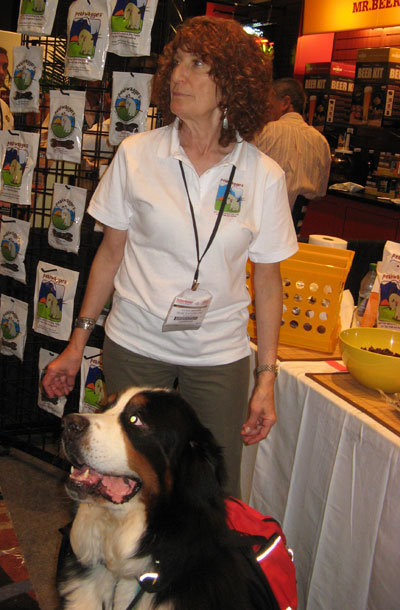 This small Colorado company sells dehydrated dog meals that are vacuum sealed so your dog can't ruin one if he goes bounding into the lake with his pack on. At feeding time, cut open the package and add 6 ounces of water; the food doubles in volume as it rehydrates, which takes about five minutes.

The very concept of dehydrated dog food sounded a bit gross at first -- but my misgivings melted on arrival at PeakWagger's booth, where company founder Gayle Brooks was pitching her wares while Sumo, her 130-pound Bernese mountain dog, relaxed at her feet.

PeakWaggers meals are all natural -- dried beef and vegetables with no sodium or preservatives. A two-serving meal package costs $8.95; four ounces of beef jerky goes for $7.95.

Brooks' table included a bowl of  jerky she invited folks to sample, demonstrating that she uses "human grade" ingredients (best one-liner of the day: the guy standing next to me who said "oh, I only eat dog-grade jerky"). I sampled some: it tasted like, you guessed it, dried slices of beef.

High-tech fabrics and insulators shouldn't be reserved only for humans, the folks at D-fa Dog say. Based in New Zealand, D-fa Dog matches its dog apparel to the specific shapes of dogs' bodies, and uses technical materials like Pertex and Merino wool.

In this video, D-fa Dogs product designer Clare-Cosson describes the Puff-Doggy insulating jacket, which retails for $109. It uses Thinsulate insulation and a Pertex water-resistant shell. 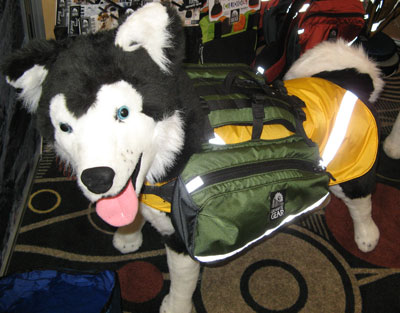 The Minnesota backpack maker will add the Alpha Dog pack to its line-up next year. The Alpha is a less-technical cousin of the Long Howl pack GG released in 2010.

The Alpha Dog pack is shaped to match the contours of a dog's body. It comes with reflective tape, interior zippers inside each half of the pack, and a handle on the top section of the harness.

These were the most interesting examples of dog gear I saw over a couple days at OR; I would've needed four legs to track down all the bright ideas bubbling up in the dog-gear market, which gets bigger every year.