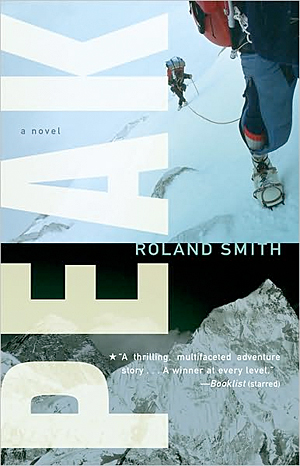 Today's kids: often they're stereotyped en masse as lazy, video game players, suffering from overprotective parents and a lack of natural sunlight and risk; or we hear about extreme examples of uber-outdoor kids who scale the highest peaks in what some see as a form of pushy, parental child abuse.

Sometimes we need to stop and listen to the kids themselves and what they think. Kids like 14-year-old Peak Marcello.

Peak is a rare and gifted climber who could become the (next) youngest kid to summit Mount Everest. He's also the fictional narrator of Roland Smith's young adult book Peak, which has won numerous awards, including a 2007 National Outdoor Book Award.

At 14, Peak is more thoughtful, observant, and interesting than many adults you'll meet. "It could have been worse," he writes. "My parents could have named me Glacier, or Abyss, or Crampon."

Here are the bare bones, without any plot spoilers. Peak lives in New York City with his mom (a former climber), step-dad, and two half sisters. After he's arrested for secretly climbing skyscrapers, he ends up on Everest in the custody of his father, Josh Wood, one of the world's top mountaineers. Josh runs an Everest guide service and, conveniently, if Peak can get to the top before his upcoming birthday he'll be the youngest to do so.

While Peak is a great choice for avid or reluctant young readers, I also recommend it to anyone from middle school to middle age on up. It would make a good book for an outdoor, school, or family group to read together and discuss. (Educators can download a free curriculum from the author's site.)

Peak is an adventure and coming of age story; it's thoughtful, exciting, and thought provoking. It could even get more kids excited about reading, writing, and the outdoors (my personal favorite things).

Check your local library (that's where I discovered it) or bookstore for a copy for your kid, or for yourself.

D&G in the Smokys

I bought a book last year from my local Blue Ridge Mountain Sports called The Road More or Less Travelled. When I opened it up I noticed it had the autographs of the authors. Turns out they work at that store! It is a comedy style book telling their tales of their AT thru hike. I don't remeber their names and don't have the book nearby, but I will repost with that info. It was a nice read and made me laugh out loud on more than one occasion! Each "chapter" is a new state they went through. I would definitely recommend it to others!

D&G in the Smokys