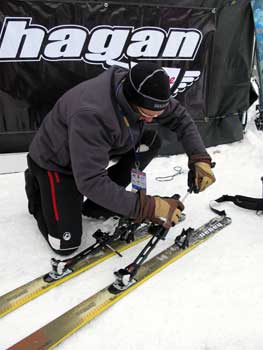 Among the proliferation of wide, heavily-rockered skis being tried out at the All Mountain Demo, one company stood out: Hagan, an Austrian ski-maker that is making its U.S. debut.

Popular in European randonee racing and hut touring circles, Hagan’s line of alpine touring skis tops out at 93 mm underfoot, and includes several models that weigh in at less than three pounds.

The entire Hagan line was possibly among the most svelte at the demo. While the trend in recent years has run to big-mountain skis with wide dimensions and lots of rocker, the Hagan line seems to represent more of a focus on traditional construction and dimensions, uphill speed and efficiency over downhill performance.

I had a chance to take a couple runs on the middle-of the-line Hagan Skyraider, an all-mountain board of fairly traditional dimensions: 122-80-107 at 170 cm (also available in 154, 162, and 178 cm) and weighing in at 3 lb 1 oz (1,390 g). I found the Skyraider to be lively and responsive, with good edge hold on harder snow, but not overly demanding. The light weight comes at a price, of course, and the Skyraider did not feel entirely stable in the prevailing conditions: bumped-up chop that had started the day as several inches of powder over a rain crust. But the 30 cm of slight rocker did reliably keep the tips on top. 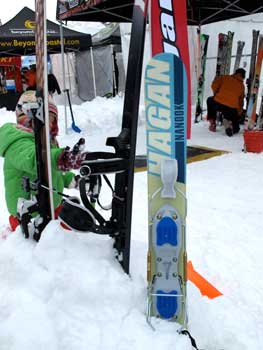 For those who view skis as a means to an end, Hagan offers the Nanook, a 99 cm approach ski that comes with custom skins, and bindings that will work with most mountaineering boots, making them a viable alternative to snowshoes for long approaches to remote alpine or ice climbs. Hagan also produces the X-Trace, a metal-edged fishscale ski that can be mounted with Nordic or approach bindings.

Speaking of bindings, Hagan also makes an alpine touring binding, the Z01. The design is very similar to the popular Fritschi Freeride and Eagle line, though Hagan claims that the Z01 is a bit lighter than the Fritschi Eagle.

While Hagan skis have been in Europe for decades, 2011-2012 will mark their first time in the United States. U.S. distributor Michael Hagen (yes, spelled nearly the same as the ski) was introduced to the brand by his Austrian father-in-law, whom he said regularly skis 100 days a year and hasn’t been on a chairlift in three decades.

That's something to which we can all aspire.

Neat to see Hagan available in the states.  Could get them through MEC in Canada for years.  Always a great lightweight option.

Did you get to try any Tua, uhh, I mean La Sportiva skis?

Due to flight snafus, I got to the demo in time to take exactly two runs before the end of the day. So unfortunately didn't get out on any of the Sportivas, though I did see them at the show and will be posting more later. What's the Tua connection?

Heard rumor that Tua is making skis for La Sportiva...