Snowshoes may be thousands of years old, but the current offerings are anything but primitive, nor are the claims made by manufacturers. Here are a few of the newest models from Crescent Moon, Easton, and Tubbs that we checked out at Outdoor Retailer's All Mountain Demo at Utah's Solitude Mountain Resort. 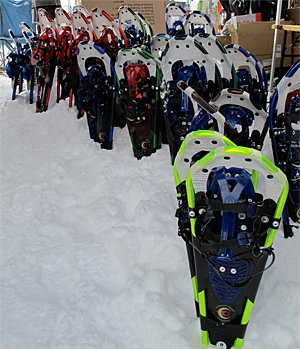 Crescent Moon's focus is its binding, and Craig Brooks, national sales manager for the brand, calls it the "easiest binding on the market to use. Easy in and out."

I tried out a pair of the brand's Gold Series 15 backcountry snowshoes for women. They indeed went on easy, and the bindings were still snug, without any pressure points, when I returned a half hour later, having snowshoed up and down powdery hills and on and off the packed down trail.

The Crescent Moon snowshoes are designed with a tear-dropped shape for better maneuverability (no need to change your gait to avoid clanking shoes). And, of the three pairs I tried today, these snowshoes allowed for the most natural gait.

They're a "high tech shoe without a high tech feel," said Brooks.

Crescent Moon is also looking into offering outdoor series for hunters (think white and winter camo models), and is redesigning its Gold 10 and Gold 17 series with bigger bindings to accommodate larger winter boots, so users won't have to switch out snowboard boots and other footwear. 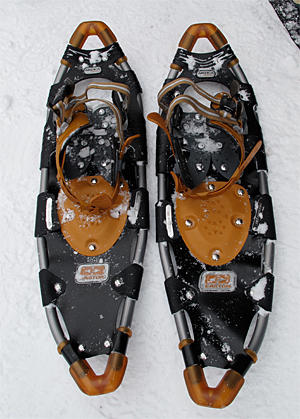 Articulation, good float, and traction, was how Easton summed up the Artica Backcountry models I tried out.

The Eastons excelled in the deepest powder and indeed had the best float of all, thanks to the largest surface area. They'd be overkill for mainly packed down trails, but would be at home carrying a heavy load in fresh snow, a worthy backcountry model.

The bindings were a little more complex than the  Crescent Moon ones, but not difficult once sized to your boots. These shoes are already available.

I paired the snowshoes with a pair of lightweight carbon CTR-65 trekking poles from Easton, which will be new for fall 2011. 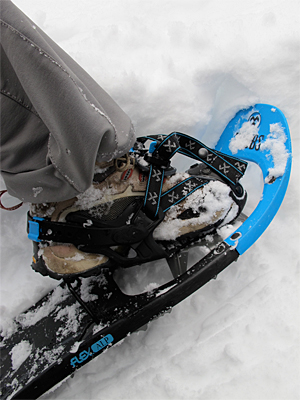 Using the Flex Alp's heel lift up a steep slope.

Tubs redesigned its Flex Alp men's and women's models with a sleeker, slimmer tail, for a narrower and more natural stride. Tubbs credits its FLEX Tail with a more natural underfoot motion and with shock absorption on packed down or icy terrain.

I tried out the women's model. The traction was indeed agressive and when I put the ActiveLift 19° heel lift into action I climbed up the steepest hills without problem.

You won't have quite as much float as with the Eastons, but these snowshoes were very manuverable underfoot, good for tight spots, with adequate flotation. (Once again, it comes down to matching the gear to the terrain and your needs.)

New from Tubbs for fall 2011 is an Xpedition snowshoe for backcountry exploration ($219.95) and
a FLEX ESC model for recreational snowshoers ($119.95). 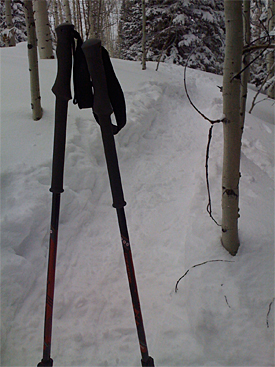 I paired the shoes with Tubbs snowshoe poles. For those community members recently wondering what's the difference between snowshoe and trekking poles, I asked Graham Gephart of Tubbs and Atlas that very question.

Gephart told me the main difference is that there's no shock absorption feature in a snowshoe pole, since you'd never need it while snowshoeing (unless it was a really bad day on snowshoes). This makes the poles less complex and brings the price point down. The tip may be made of different materials too. Tubbs' poles have a carbon steel tip designed for snowy terrain.

The two-section poles, obviously won't pack down as small for stowing on the trail. But, if you're snowshoeing you probably don't need to do that anyway.

Graham Gephart also gave us an intro to that redesigned Flex Alp snowshoe from Tubbs:

Stay tuned for more snowshoe — and other gear — coverage from the show.