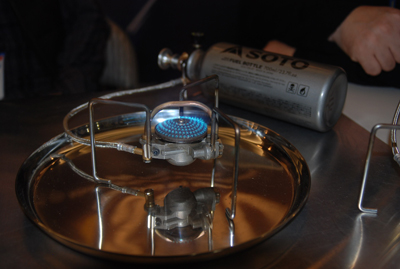 A first look at the Soto Muka atomizing stove

The Japanese stove manufacturer Soto was heating up Outdoor Retailer with a fully functioning model of their new Muka (Japanese for "atomize") liquid fuel stove.

The Muka stove is unique in that it atomizes the fuel rather than evaporating it. Most pump-type liquid fuel stoves push fuel under low-pressure through a generating coil that boils the fuel into vapor. It is the vapor that burns. In order to heat the fuel to boiling, the stove needs to be primed, a messy, potentially dangerous process.

The Muka stove instead sprays fuel under high pressure into a specially designed burner that atomizes the fuel into millions of microscopic droplets, which are burned directly.

What does this mean for hikers? The stove starts immediately, with no need for priming.

Trailspace saw the stove at last summer's OR show, but couldn't photograph it then, due to patent negotiations. Saturday, Soto told me I was the first in America to photograph the stove in operation (check out the video below too).

Tomo Sekiguchi of Soto demonstrated the new Muka stove at Outdoor Retailer for us:

So, if this doesn't require priming, why is there still a coil on that burner?  Looks like it is still priming to me, just doing it directly out of the burner rather in a cup or felt... just my limited opinion.  I can get my XGK-EX up and running in little more time than that.

That's basically fuel injection, if I understand correctly, in a camping stove.

How many pumps needed to get that high pressure?

This could be a new revolution I think the downfall will be is that the fuel bottle is unique to the stove and not a standard bottle. I have used an MSR whisper lite international and like the idea of being able to also use kerosene and diesel as well as white gas and unleaded gas.

The pump also like many stove does not appear to be field repairable something that can make or break a trip. Think they need to make it more field friendly

In addition to the above mentioned concerns: My concern is fuel under pressure is inherently hazardous.  More pressure means potentially more fuel escaping, exasperating any accident.

Cleric - That's a good question!  My supposition is that the coil is there to preheat fuel and improve efficiency.  There is a finer point here too - the stove starts IMMEDIATELY, while the coil is still cold, meaning that the coil's function is likely just for the "main phase" of the stove operation.  In the video, you can see just the slightest hint of yellow flame, which suggests incomplete combustion to me.

whomeworry - That's a perceptive concern.  Perhaps they've anticipated this?  There is an "emergency shut off" button that they demonstrated to me.  I haven't seen this feature before so I noted it.

Personally, the only time I've been in a radical rush to get water boiling was in a rescue situation.  We always carried canister-gas stoves on missions anyway.

I never really minded priming any of the gas/kerosene stoves I've used over the years -- it was always a lot faster, easier, and cleaner,  than getting a campfire going.

I do remember that when I finally bought the optional pump for my Svea 123, it made getting priming gas out of the tank easier.  After I got my first MSR stove, the only issue I had with using white gas or kerosene for priming was the carbon buildup, so I now carry denatured alcohol for priming - - - and starting campfires, and a few other utilitarian tasks.

..whomeworry - That's a perceptive concern.  Perhaps they've anticipated this?  There is an "emergency shut off" button that they demonstrated to me.  I haven't seen this feature before so I noted it.

It's one thing to have an emergency shut off button, yet an entirely different matter to be able to safely reach it and have time to actuate it.  The two stove malfunctions I have witnessed indicated it was all one could do to grab the flaming unit and chuck away from tents and people, and only afterwards determine how to control the situation.

How about making the fuel shut off  switch a dead man type like they use for filling fuel farms or aircraft ;)

I've been testing/evaluating one of these.  The Muka definitely needs to warm up before it burns properly.   They inject a lot of air into the mix in the beginning.  Once it warms up, then you switch it to "run" mode, and the stove relies on vaporization from that point forward.

It's kind of an interesting stove, but it really doesn't simmer.  It can be turned down some, but at low flame, the stove goes out a lot, just like a Whisperlite or XGK.

I've been testing/evaluating one of these.  The Muka definitely needs to warm up before it burns properly.   They inject a lot of air into the mix in the beginning.  Once it warms up, then you switch it to "run" mode, and the stove relies on vaporization from that point forward.

It's kind of an interesting stove, but it really doesn't simmer.  It can be turned down some, but at low flame, the stove goes out a lot, just like a Whisperlite or XGK.

I hope you'll add a review of the Muka to Trailspace, once you're ready to give an evaluation of its performance. I'm sure others, including me, will be interested in hearing your thoughts on its capabilities.

I'll definitely write something up in the next week or so.

I'll definitely write something up in the next week or so.

I have gone ahead and posted a review of the Soto Muka:

I've also put together a play list of all of the videos on the Muka stove that I could find:  https://www.youtube.com/user/hikinjim#grid/user/FAB5A33471A71A1A

Thanks for sharing your review, Jim.

FYI, I edited your link above slightly, so your review is on the Soto Muka product page.

Thanks, Alicia.  I noticed that it wasn't quite linking up.

A little scary how much pressure there seems to be and I do wish the video went a little longer to show the flame control.  Full on, seems like it would melt the pot.  I wonder what full simmer, lowest continuing run looks like.

Although it would be nice to use other bottles that fact that this has a particular bottle at this early stage is not a concern to me.

Emergency shut off valve, yeah good but probably too late by the time is is needed.

Technology advancement is always a good thing.  If not for tomorrow then probably for the next day.

It is a lot of pressure, but the stove and pump are very well built.  The stove did not seem to have any problems with the pressure.  There's nothing flimsy about this stove.  The pump is of excellent quality and really stands out when compared to an MSR pump.

I didn't do simmer testing in this already long video, but I did do simmer testing separately.  It does have a relatively low flame, but it's not the best simmerer in the world.  It does not simmer as well as a typical canister gas stove.  I was able to cook a chicken noodle dish the other night, but I had to keep stirring.

Rumor has it that Soto is going to introduce a multi fuel stove in 2012.  Anyone got any scoop on this?