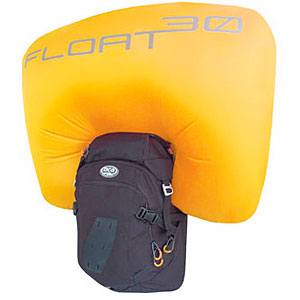 The number of avalanche airbags available to backcountry skiers and riders has exploded in North America in the past few years. And you've likely noticed that the safety devices are also getting more media attention this winter, not just in the outdoor world.

Avalanche airbags have been credited with saving several lives in recent avalanches. In the January 25th video above, pro snowboarder Meesh Hytner is caught in an avalanche in Colorado, but stays on top after deploying her BCA Float 30 avalanche airbag.

Most recently, pro skier Elise Saugstad credited her ABS airbag for helping her survive an avalanche near Washington's Stevens Pass, in which three others died (watch Today Show clip).

So far this 2011-12 season, the American Avalanche Association has recorded 18 avalanche deaths. The attention on the fatalities and the gear involved has touched off discussions about the importance of avalanche awareness and safety and the role of backcountry gear.

Here are some media clips on the issue:

Airbags and other safety devices offer no guarantees in the backcountry, especially without proper instruction and awareness. But backcountry skiers and riders can expect even more options available next winter.