Lessons from an outdoor entrepreneur 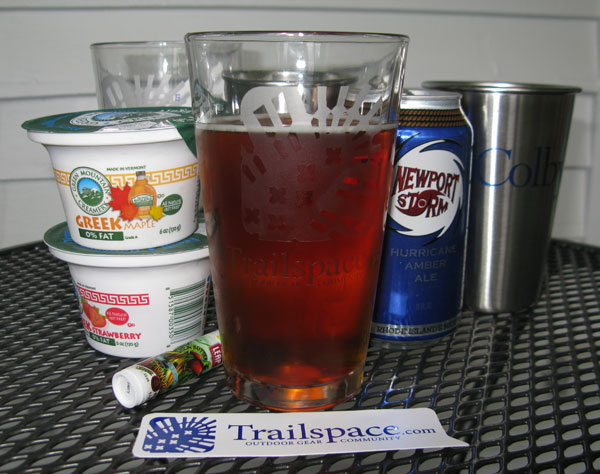 This past weekend, as part of our 15th Colby College reunion, Dave and I had the pleasure of speaking on an alumni panel with four fellow classmates who've also founded companies.

While we typically prefer to work behind the scenes, our panel was a full house and a great experience for us. We got to connect with and learn from classmates who've founded a brewery, dairy, organic soap brand, and market research firm.

Plus, thinking about and discussing my own entrepreneurial endeavors gave me pause to reflect on how I ended up where I am at Trailspace, what I've done right (and wrong) to get here, and where I want myself and my company to go.

While online media has changed dramatically since we launched Trailspace in 2001, we're still committed to our original mission: to make Trailspace the most comprehensive, accurate, and helpful community for finding and sharing facts and opinions about gear for human-powered, backcountry recreation.

Articulating and reaffirming those core goals this weekend left me more energized and committed to our vision for Trailspace and thankful for the members who've helped make Trailspace a great outdoor gear community. (Oh, and as a bonus, my alma mater gave me a Klean Kanteen Pint as thanks.)

While the companies presenting were diverse, there were a number of common entrepreneurial themes:

The most important lesson: The proudest moments come from making a difference in people's lives.

That's pretty cool, whether you're making a great craft beer, delicious organic yogurt, or the best outdoor gear community around. Thanks to each of you for being part of our personal and professional passion, Trailspace.

Great ideas are only as good as their execution.

Kinda reminds me of what I always tell myself and others:

The only people who "can't" accomplish something in life are those that set boundaries for themselves and/or those that do not try hard enough.

Good entry, Alicia.  A declaration of intention, firming up the unifying principle, the excercise that must be practiced.

Thanks, Rick and Drake.

Even when you're busy and supposedly know exactly what you're doing and why, I find it necessary to occasionally step back and clarify every so often. It helps to focus and reaffirm.

Glad you liked it.

There is one other factor common to successful businesses and people, that was left off the list:  Fate has treated them kindly.

I have known many many small business owners, idea people, and talented artists.  I have seen plenty of well executed, sound, concepts fail for no fault of the owners.  Some folks think success a matter of intelligently asserting themselves in the world.  They are fond of saying “We are the masters of our own destinies,” a quip whose root trace back to poet W.H. Henley’s “I am the master of my fate.”  Tell that to the ocean sail boat skipper!  If we have any level of self determination, it is subordinate to the proverb “But for the grace of God goes I” a quio based on John Bradford’s musing upon sighting prisoners being lead to execution: “But for the grace of God goes John Bradford."  Indeed often it seems our influence over destiny is illusionary, that we have about as much control as a child behind the steering wheel of his toddler car seat.  The fact is the fraternal twin of success is failure, and which twin are we many times is the result of fate.

The only way to avoid lighting strikes is to stay hidden beneath the rock one cowers under, only to risk being flooded out of your recess.  But if you want to accomplish anything, one must engage their surrounding, which opens one up to risk, much of which is predicated by fate, striking random as a bolt of lightning or lucky as the lottery.  Who would have guessed back in 2000 that the economy of 2012 would be such a mess, ruining so many previously sound businesses, careers, and lives?

Fate can have profound influence.  I know one person who was set for huge successes.  They had a bunch of great concepts, the necessary skills, access to resources to make any of them happen, and connections.  But then they got t-boned big time in a auto accident, house wrecked in an earthquake, a child born retarded, lost everything they owned in a second house destroyed by brush fire, divorced, downsized out of jobs several times, and beset by a string of serious, ongoing, health issues to contend with.  So instead of living in a house on the hill, or even a condo in a decent burb, this person has been struggling to get off Square One all of their adult life.

Likewise some folks blunder haphazardly into good fortune, despite themselves.  I have a friend who is basically a space case.  He is smart, but struggles with basic functions in the real world.  Can’t remember dates, but refuses to use an organizer tool.  He would misplace his head if it weren’t attached to his shoulders.  Inattentive and more easily distracted than an Irish Setter.  After college he ended up working as a restaurant server or counter person in several delis, back in the 1980s, when it was relatively easy for a college grad to get a good job.  One day fate literally walks in the door, introduces himself: “Hello I am Mr. Successful Opportunity.  A new, obscure technology advent has just occurred, it is in high demand, it is easy to learn, and makes tons more money than what you are doing, and I will set you up.”  Then he ends up working for someone who owns one of these businesses, who happens to suddenly need to retire, and has no one better suited to sell it to than my friend.  Then as owner he has the good fortune of the major competitor in his market deciding to divest from this field, so my friend's business instantly grows fifty fold.  As if that is not enough, a rich who’s-who aunt from San Francisco with no heirs leaves him a vast fortune in prime SF real estate and thousands of shares of Coke stocks kept in the family since the 1930s.  Yea, he has managed not to squander it all, but come on!  I would be grateful for just one of his many strokes of good fortune.  In his own words, even his screw ups are golden (his last name is Golden).  And then there are the Brittany Spears and Boy Band celebs whose major efforts facilitating their success include wining the genetic lottery, some plastic surgery, and showing up on time for the photo shoot.  Lucky breaks can be worth millions.  Face it, even Hillary climbing Everest needed lots of luck to pull it off.

So while those of us who have accomplished good fortune like to attribute it all to hard work and acuity, the truth is we also have luck working for us when it counts.  A alledged Roman era quote observe: "All glory is fleeting."  Thus regardless of what one does, they are best off measuring their personal success by how close they live life to their principles, and how they treat others.

Ed, the concept of fate and luck in business is a very interesting and relevant one. Thanks for raising it. Your response reminded me of a reference to luck I read this week by Jim Collins in an Inc magazine interview.

I haven't read Collins' latest book yet, Great by Choice: Uncertainty, Chaos, and Luck — Why Some Thrive Despite Them All (it's on my to-read list). But in it he and his co-author conduct a nine-year business luck analysis.

Here are some highlights from an interesting New York Times essay by him on the subject (ROL = return on luck):

What’s Luck Got to Do With It?

The very nature of this study — how some people thrive in uncertainty, lead in chaos, deal with a world full of big, disruptive forces that we cannot predict or control — led us to smack into the question, “Just what is the role of luck?”

There’s an interesting asymmetry between good and bad luck. A single stroke of good luck, no matter how big, cannot by itself make a great company. But a single stroke of extremely bad luck, or an extended sequence of bad-luck events that creates a catastrophic outcome, can terminate the quest.

The 10Xers exercise productive paranoia, combined with empirical creativity and fanatic discipline, to create huge margins of safety. If you stay in the game long enough, good luck tends to return, but if you get knocked out, you’ll never have the chance to be lucky again. Luck favors the persistent, but you can persist only if you survive.

After finishing our luck analysis for “Great by Choice,” we realized that getting a high ROL required a new mental muscle. There are smart decisions and wise decisions. And one form of wisdom is the ability to judge when to let luck disrupt our plans. Not all time in life is equal. The question is, when the unequal moment comes, do we recognize it, or just let it slip? But, just as important, do we have the fanatic, obsessive discipline to keep marching, to push the opportunity to the extreme, to make the most of the chances we’re given?

Getting a high ROL requires throwing yourself at the luck event with ferocious intensity, disrupting your life and not letting up. Bill Gates didn’t just get a lucky break and cash in his chips. He kept pushing, driving, working — and sustained that effort for more than two decades. That’s not luck — that’s return on luck.

I thought you might find that interesting. I want to read the full book.

I should add that in our panel we also talked a lot about failures, setbacks, and trials in creating and sustaining (or trying to) your own business. At times we may have sounded like cautionary tales (don't do this if you want to have a life, make money, have security, etc).

But, as one panelist said, "still, in the end I'm making beer."

I suppose that's the lesson. It may or may not work out, success (and luck) come and go, but either way you might as well be doing something you believe in.