Tuesday was blistering hot at Outdoor Retailer Summer Market's Demo Day at Utah's Pineview Reservoir. Copious quantities of Sierra Nevada and the coolest in new outdoor equipment were just the thing to temper the heat, though many brands opted to heat things up. 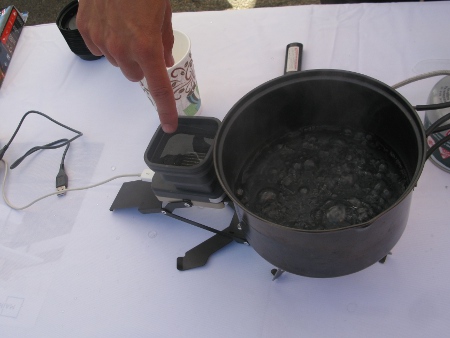 The newest entry to a growing category of thermoelectric power generators (like Biolite and the PowerPot) is the nifty FlameStower. Andrew Byrnes, one of the company's materials scientists, explained that several things make the FlameStower unique.

First, the unit is separate from a cooking device. It has a built-in height adjuster so that it's compatible with different stove systems and even fires.

Second, it incorporates a little silicone dish of cool water. Since the thermoelectric generator is more efficient where there is a higher temperature gradient present, this cool water purportedly makes it a more efficient power generator. 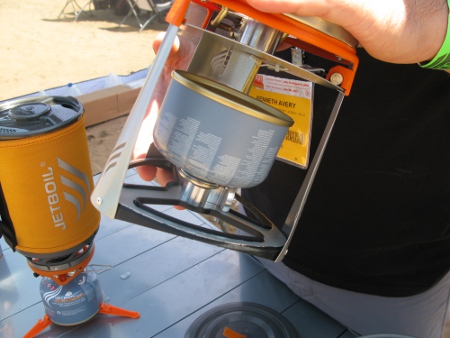 Jetboil, already known for zippy boil times, has introduced a real scorcher of a stove.

The Joule is powered by an inverted pressurized fuel canister, which delivers a steady stream of liquid fuel to a burner assembly that includes a warming coil. 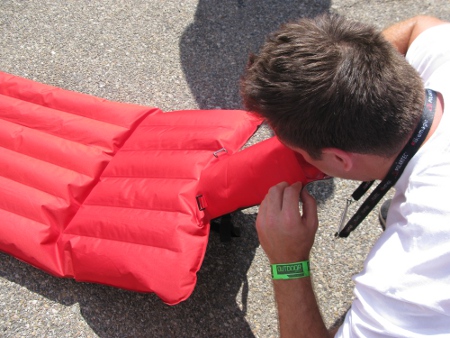 The gentleman at Windcatcher used words like "channel" and "multiply" to describe the effect its new "rapid inflation technology" has on your breath while inflating the Windcatcher Air Pad.

To me, it's quite simple: You avoid becoming a blue-lipped, gasping wreck while attempting to puff enough air into your sleeping pad.

Ryan Frayne and Zeke Camusio demonstrated the Windcatcher Air Pad for us:

Want more photos? Check out our Demo Day Photo Album on Facebook for more shots from the day.