"Most people want to do the right thing. They just don’t always know what the right thing is," says Dean Ronzoni. That's where the Leave No Trace Center for Outdoor Ethics comes in.

Based in Boulder, Colo., the Leave No Trace Center works to educate everyone who enjoy the outdoors—frontcountry visitors to mountaineers—about ways to prevent and minimize their recreational impacts.

In the Q&A below we talk with Dean about his role as the center's Development and Membership Manager, the biggest Leave No Trace misconception, and what he does when he sees someone behaving "less than Leave No Trace." 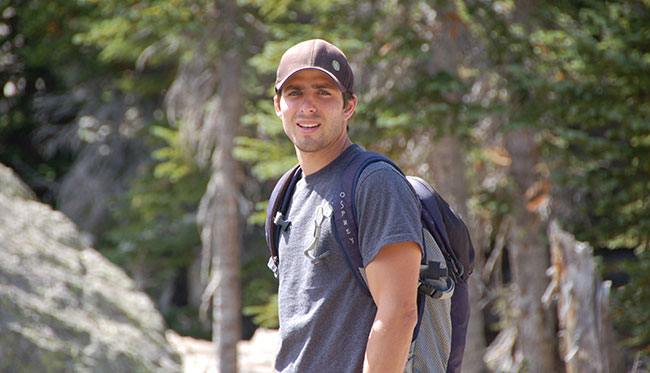 What exactly do you do at Leave No Trace?

I work closely with the corporate and small business partners, members and donors, and various fundraisers that support Leave No Trace. I administer development initiatives and provide general support to these communities. (Trailspace is a corporate partner of Leave No Trace.)

How would you describe the work of Leave No Trace?

The Leave No Trace Center for Outdoor Ethics protects the outdoors by teaching people how to enjoy it responsibly. 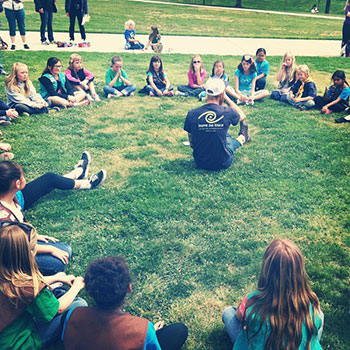 A Subaru/Leave No Trace traveling trainer teaches a group of Girl Scouts.

The Leave No Trace program is built upon the premise that conservation of our outdoor resources is possible when all who enjoy the outdoors know how to respect and prevent impacts from their activities. It is every person's responsibility to protect our nation’s treasured natural heritage for the future.

How did you get involved?

I moved to Boulder, Colorado, in 2009 and worked as an intern for Leave No Trace, helping with the Community Partner program. We have about 350 community partners, which include schools and universities, guides and outfitters, small businesses, and nonprofits.

After the internship ended I continued to volunteer for various events. In 2010 I became a full-time employee working in the development department.

What's the best part of your job?

Each day is different. I get the opportunity to work with a great team to bring Leave No Trace messaging to communities across the nation.

Why is your work relevant?

Today, people need the outdoors more than ever, and without Leave No Trace ethics the outdoors will look very different in a month, year, decade...

I enjoy anything outside, but my passions are skiing and climbing.

I started skiing when I was five, and spent the summers sailing in N.Y. 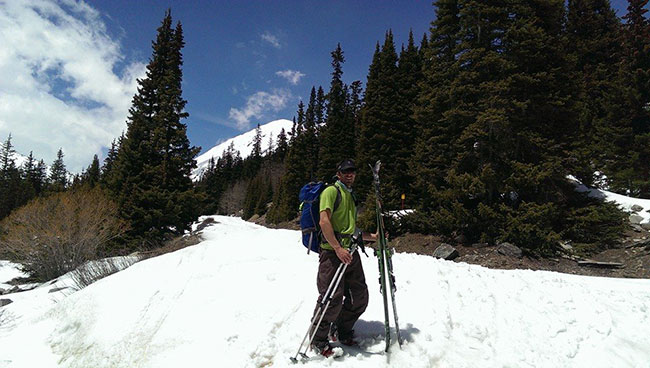 What do you think is the biggest threat to the outdoors?

In my opinion, I think the largest threat to the outdoors is the increasing population. As the population grows, more and more people are enjoying the outdoors. The consistent use of our parks and protected lands can create lasting impacts.

Now more than ever people need Leave No Trace education to learn how they can help reduce their impact so the next generation can enjoy the world as we do now.

What are most common questions you hear about Leave No Trace?

We typically hear that people have heard of Leave No Trace, but were not aware there is a nonprofit organization that develops and spreads messaging, conducts research, and supports volunteers.

The Leave No Trace Seven Principles


Learn more about the principles »

What is the biggest misconception about Leave No Trace?

The largest misconception about Leave No Trace is that people think of the Seven Principles as a set of rules and guidelines.

Leave No Trace education is based on science, but the center is still an ethical organization. Leave No Trace is actually fun to practice and you can make a game out of it. It feels good to do the right thing.

What do you personally do when you see someone behaving in a non-Leave No Trace manner?

I'll typically approach someone that is doing something "less than Leave No Trace." We actually teach a technique called "authority of the resource."

If someone is walking down the trail with something they found, like a deer antler, I would say "Wow, that’s a great looking antler you found up the trail. Boy it would have been great if I was able to see it up the trail as well."

Most of the time people have an aha moment and wonder if they should have removed the antler from its natural habitat. Most people want to do the right thing. They just don’t always know what the right thing is. Using authority of the resource opens the field to educate that person further and teach them alternative methods to creating that memory.

I am pretty much always wearing my Transcendent Hoody by Outdoor Research. It’s nice to have the comfort and warmth of feeling like I’m walking around in a sleeping bag. 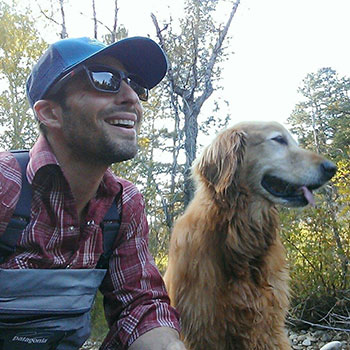 Dean and his dog, Tucker, scout for fish after work up Boulder Canyon in Colorado.

In my pack I have a climbing rope, headlamp, and waste bags for my dog, Tucker, and I.

Hopefully it doesn’t rain today and my partner doesn’t bail so I can go climbing after work, but then again there’s always the Boulder Rock Club.

Personally, James and the Giant Peach by Roald Dahl.

"When in Doubt, Dominate!”  — Spaceman

When the fear of failure is hindering you from success, sometimes you need to dismiss all doubt in your mind and go for it.

Why should Trailspace members join Leave No Trace?

Members are the backbone of the Leave No Trace Center for Outdoor Ethics. Without the generous support of these outdoor advocates, the center would not be able to take part in research projects and educate the nation about how to enjoy the outdoors in a responsible way.

If you enjoy being outdoors, even one day per year, you should learn more about what it means to be a Leave No Trace member.

What would Trailspace members or your coworkers be surprised to learn about you?

I like to sew. Mostly I alter outdoor gear or fix clothing that I have torn. Most recently I altered a coworker's backpack by replacing straps and fabric to make the pack lighter. I’m pretty excited about that, because he just broke the unsupported speed record on the John Muir Trail (southbound).

That reminds me, I have to sew some beanbags tonight for the new Leave No Trace cornhole set. 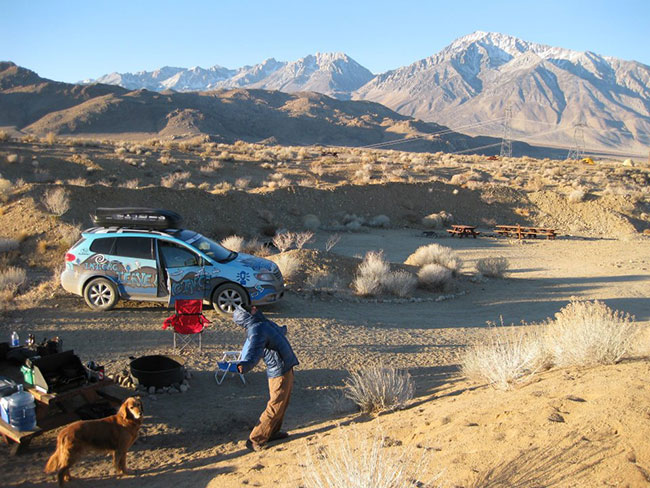 The Leave No Trace Center for Outdoor Ethics teaches people how to enjoy the outdoors responsibly. As a member of 1% for the Planet, Trailspace annually supports Leave No Trace and other environmental nonprofits important to human-powered backcountry recreation.

Read more outdoor nonprofit Q&A's with the dedicated people who professionally steward, support, and advocate for the mountains, crags, forests, and rivers we explore.

First off, thank you, Dean, for your hard work with the LNTC! Like you said, the principles are so clear, but sometimes we forget to do that right thing.  Great to keep in mind both on the trail and off the trail with newer folks to LNT!

I sew occasionally and I'll be working on my first big project in the next month or two, a Karo-Step Top Quilt for ground use!

I love the fact that LNT's 7 principles are printed directly onto the inside of my Osprey Atmos 65. I'm not sure to what extent LNT has expanded this sort of collaborative work, but my Osprey Talon 22 doesn't include such feature. I'd love to see this sort of collaboration become the industry norm. Imagine, every time you bought a piece of gear intended for outdoor adventure, be it a sleeping bag, pack, jacket, etc., you're reminded in some way, of the LNT principles.

This is an important topic. The country needs some anti-littering campaigns and more programs to help educate outdoor users. Campsites are as trashy now as they were in the 1970s. The last campfire ring I used in the backcountry had some trash in it.

I appears that having people pick up after themselves is not intuitive and people must be trained and educated. LNT is definitely not intuitive. It should be taught in public schools.

Thanks to everyone who helps spread the outdoor ethics of Leave No Trace to all outdoor visitors.

Sadly, not everyone intuitively cleans up after themselves (in the outdoors or not) and we can all unintentionally cause harm. As Dean mentioned, even when we want to do the right thing, we don't always know what that is.

In addition to the seven principles, LNT also puts out info specific to certain activities and areas.

For example, they offer a mountaineering guide; reference cards for fishing, winter use, canyoneering, hunting, and more; and skills and ethics booklets for regions like Alaska wildlands and Northeast mountains and activities like caving, sea kayaking, and rock climbing, and more.

Some of the info is common to all, but it's nice to have some specifics too.

Kudos on your work on your work on Leave no Trace. One thing I did not see mentioned is the practice of bringing out more than you bring in.  I attempt to pack out a little extra trash on every outing, including cleaning up fire pits when car camping.  It was amazing the  look on some younger campers faces when thy observed this for the first time, in this dispose of everything world, the thought had not occurred to them.  A second note in some areas, dismantling a existing fire pit is counter productive as a new one will be build nearby.  Some heavily used areas should be left build up, as its better to have all that traffic stay in one area.  I disagree with removing any trail marking  rock piles and signs as not everybody uses a G.P.S. and they can be critical for the safety of inexperienced trail users.  In rural areas try to go with the local vibe to avoid alienating locals that may not have the same education and view point you may have, educate in a gentle fashion, by example.