A reservoir with innovations that make sense, but durability could be a big issue. The main advantage is the three-dimensional shape of the reservoir, which allows it to easily fill and dry out. Other plus factors include a fold-away hook to hang it up, an easy-to-use open/shut valve, a sturdy hang hook (if you use it with a Gregory pack), and a baffle to prevent water from sloshing. With or without a Gregory pack, this reservoir should have been a worthy competitor for your hydration needs.

Unfortunately, a major failure occurred after about six months of use (details below). 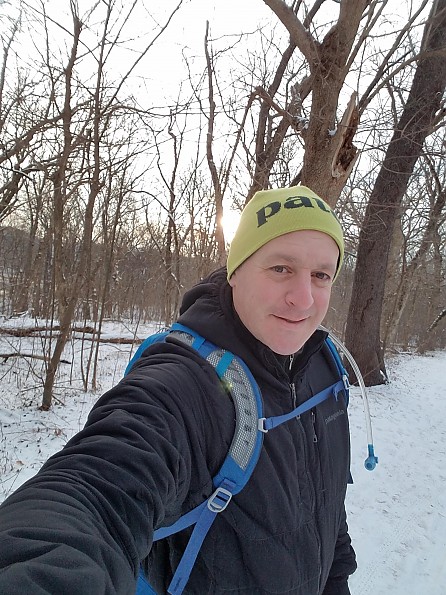 Gregory includes a three-liter hydration system with some of its backpacks, the new 3D Hydro 3L Reservoir, also available as a 2L reservoir. It fits in a separate zippered pocket of Gregory's Citro 25 pack (which I recently reviewed), and it is designed to fit on a wide plastic hook inside the hydration pocket. 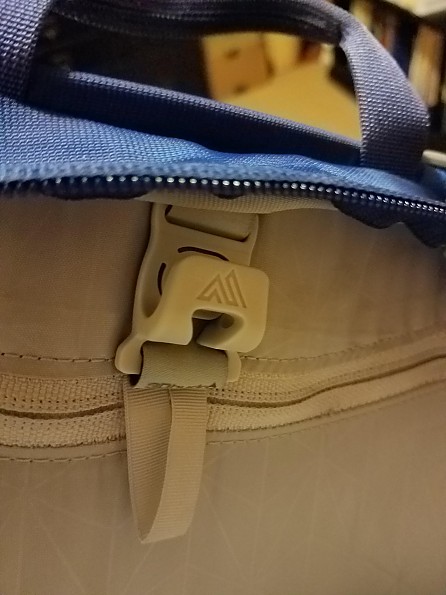 The 3D Hydro bladder sits on that wide hook on Gregory backpacks; one could also secure any bladder to the nylon loop. 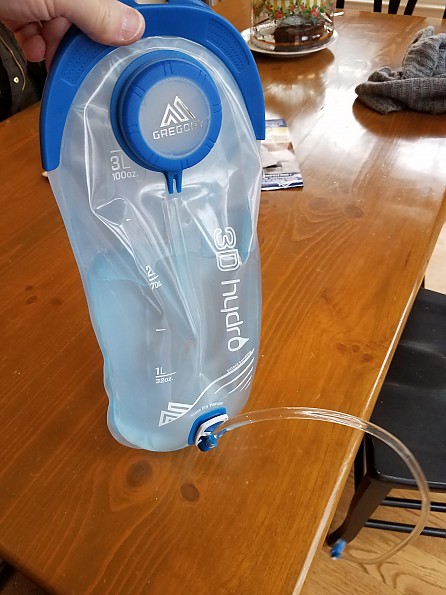 The reservoir, filled to 2 liters (note the fill lines on the bladder). The blue plastic trip on top is very sturdy, easy to hold.  Note where the plastic interfaces with the fill cap—as noted below, the bag delaminated from the fill opening, causing a big leak during a hike after about six months of use. 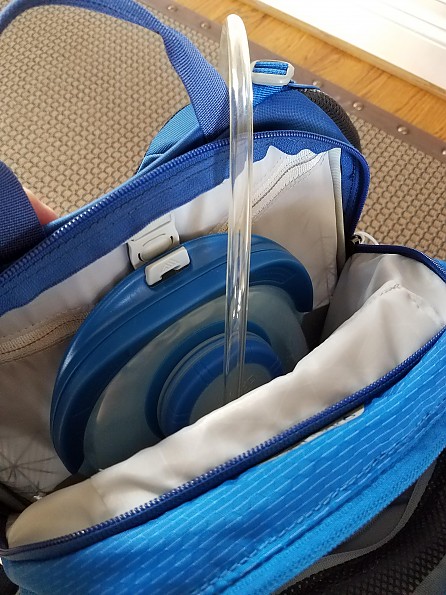 No opportunity for the reservoir to move around much with that hard plastic hook. I wonder how durable the clip will be, but it seems more robust than a hook on a competing reservoir that repeatedly broke during use for me.

There is also a nylon loop that could be used to secure other reservoir brands, if they have a hook or loop on the top, but this is really designed to work best with the proprietary reservoir.

Because this is a proprietary solution, it's worth explaining how Gregory integrates the reservoir with its backpacks. There are no apparent ports to let the tube out on the large day pack I used with the reservoir. You use the top zippers to put the hose exit where you want it. The tube can emerge anywhere along the track of that zipper, so it's easy to have the tube come out on either side or the top.

Of course, the main advantage of a separate pocket is that you can unzip and remove the whole reservoir to refill it without messing up the contents of your main pocket. Other companies already offered this, and it's a very helpful feature. 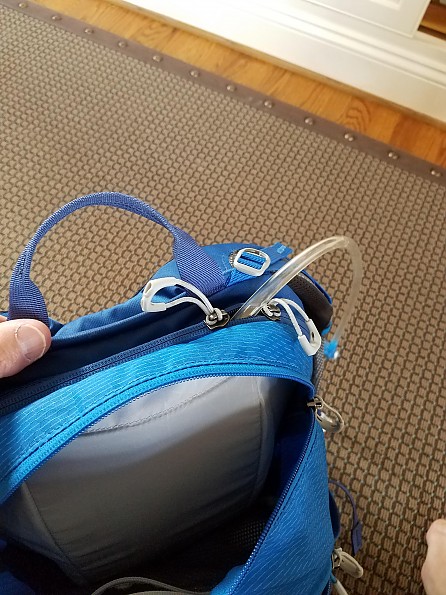 As an aside, this also shows the haul loop between the shoulder straps on top. It's quite robust. I might hesitate to haul this due to the mesh back panel, but the loop is heavy duty.

The hose could be a tad longer, but it was fine for me.

The 3D Hydro 3L Reservoir hydration system holds three liters; the opening is on the small side. There is a baffle in the middle of the reservoir to keep water from sloshing around. A significant plus of this reservoir is that the body of the reservoir isn't flat—even when empty.

What does that mean? It's really, really easy to dry this reservoir out after using it. There is a hook that swivels out of the way when you're using the reservoir but that makes it very easy to hang it up—and because it's shaped and allows air to circulate, it dries out better than any other reservoir I have used. 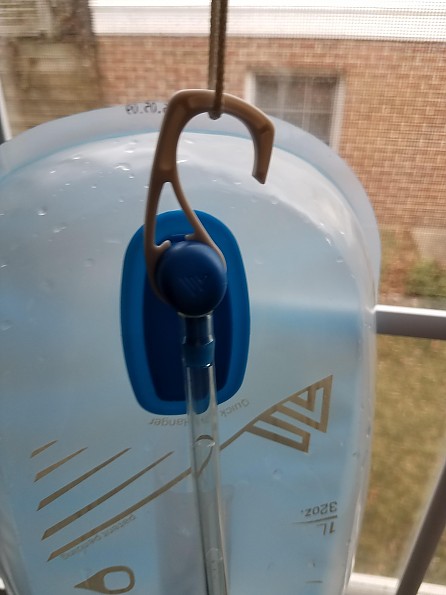 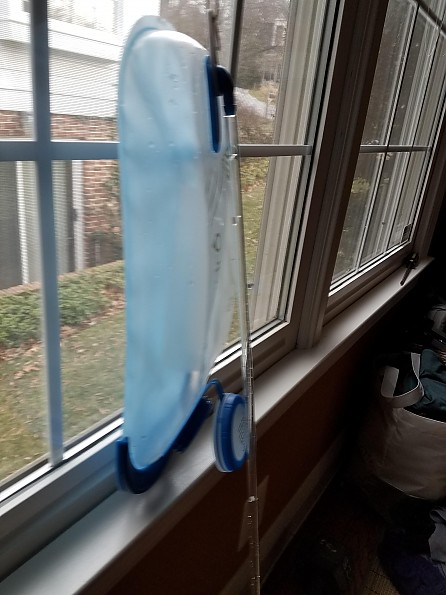 The bite valve is most similar to the solution Osprey proprietary reservoirs use, whereas Camelbak and Platypus valves are all soft poly, Gregory and Osprey have a valve that is soft where you bite down, on the edge, but solid plastic in the middle.

This reservoir also has a unique valve lock to avoid leaks. It slides up and down, whereas other valves I have seen twist somehow. (This is important. Anyone who has tossed a pack with hydration into their car or tent and had the pack rest on the valve knows that you can end up depositing a lot of water. You want a hydration system that locks down so the valve won't leak!) 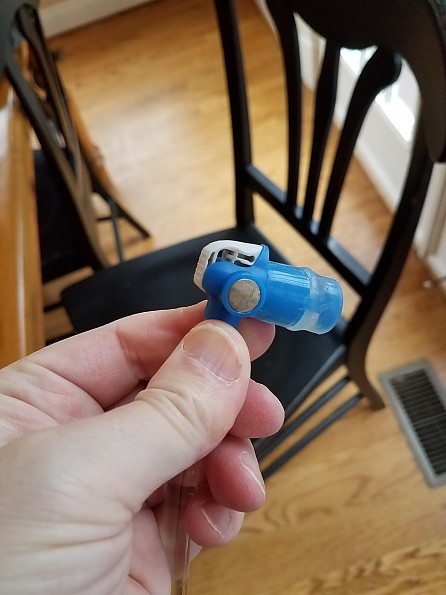 You can see the round magnet just above my thumb.

The first time I used it, I found the valve opens and closes easily. I emptied the reservoir, hung it up to dry, and it completely dried out overnight.

When I initially wrote this review, I had used this reservoir steadily for over three months, not only with a Gregory backpack, but also in a number of others. It experienced no failures or leaks, it is easy to use, the water doesn't make much noise due to the baffle, and drying it out is a cinch.

UPDATE 6/2017: Roughly six months in, the plastic bag pulled away from the rim around the fill opening during a long day hike. It discharged quite a bit of water into the backpack, and the reservoir was a total loss. By way of comparison, I have not experienced a failure like this with any competing products. Consequently, I downgraded the reservoir to a "poor" rating.

In non-Gregory backpacks, it pretty much functions the same as any other reservoir; if you happen to use it with some brands (Osprey), the magnet on the bite valve works with Osprey's magnetic sternum strap clip, too. 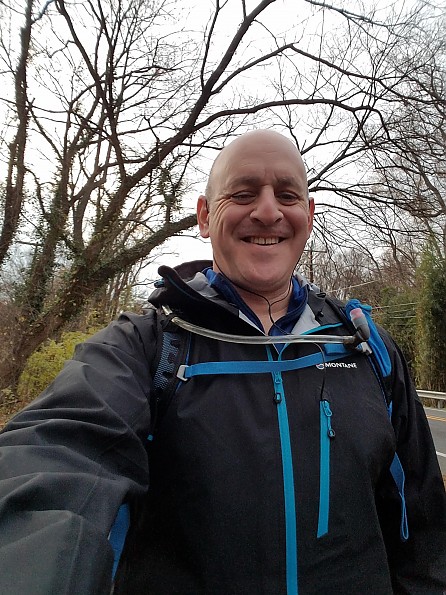 I would buy the 3D Hydro 3L Reservoir regardless of whether I was using a Gregory backpack because I like the shut-off valve and the way it is so easy to hang upside down and dry it out....if I had better confidence about durability.  I did not treat it roughly, and it failed at six months. Also, having a reservoir that easily dries out lessens the need for a wide mouth to fill it up.  Great design.  Perhaps mine was a prototype, but durability outweighs design for me.

Source: received for testing via the Trailspace Review Corps (Sample provided by Gregory for testing and review)

Another great review, Andrew. Thanks!

Thanks for pulling out this helpful reservoir info for others, Andrew.

Hi there, Andrew, how do you keep your reservoir clean, fresh-tasting and non-toxic not using any horrible chemicals like bleach?

For disinfecting, try using the Katadyn micropur tablets. It's easy and effective.

Bummer about the reservoir, Andrew. Thanks for letting us know what happened. 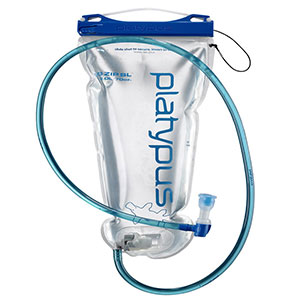 Trailspace's community of gear reviewers has field-tested and rated the top hydration reservoirs.