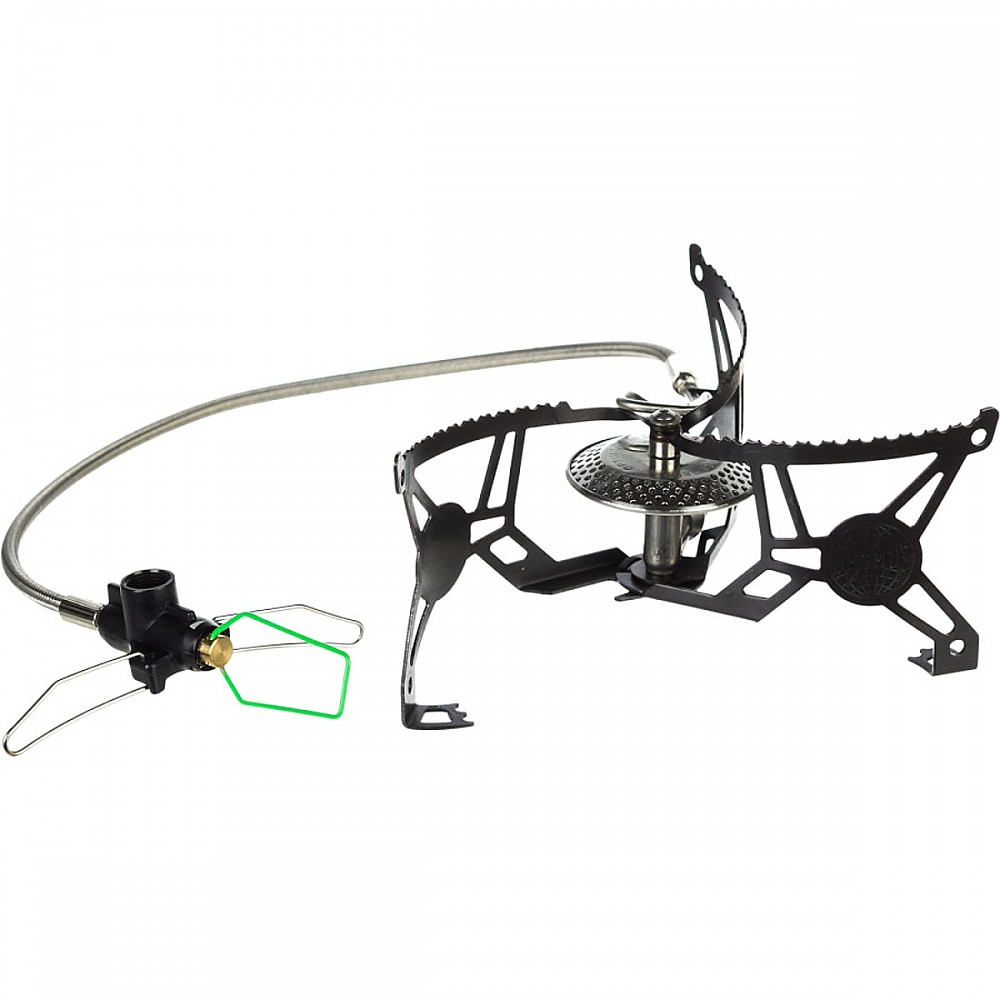 The Optimus Vega is a small, lightweight remote canister stove billed as a high performance four-season stove because of its ability to easily flip the canister upside down into what the manufacture calls “4 season mode.” This mode allows the stove, with the canister flipped, to more efficiently burn fuel with consistent pressure for faster boil times in cold weather (i.e. winter). Of course it can be used in warmer temperatures as well. 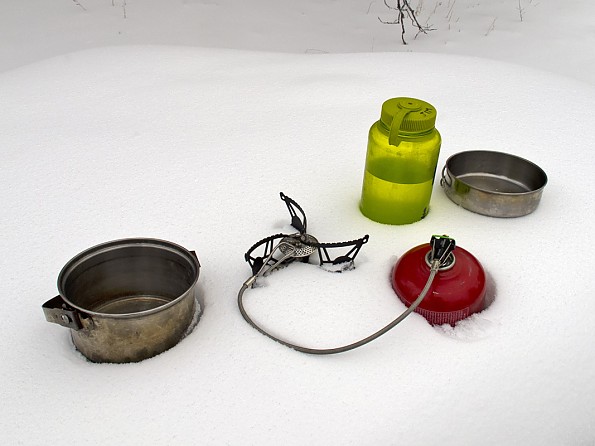 The stove is quite small and light, folds neatly, and is stored in an enclosed heavy duty canvas bag.  It comes with a folded aluminum wind screen which is also stored in the same bag. The stove, windscreen, and storage bag weighs in at a respectably light 8.4 ounces / 237 grams.  The bare stove weighs in at paltry 6.3 ounces / 179 grams.  The flexible fuel line is just shy of 12 inches long. The stove can easily handle an eight inch wide pot.

Using the stove couldn’t be easier.  Simply screw on any standard Butane, Propane, or Isobutane canister (such as MSR, Snow Peak, or the Optimus brand), stabilize the canister and stove and light.  I should mention here that care should be taken when attaching the canister to the stove as it’s easy to forget to fold out the fuel adjustment knob, trapping it between the canister and the fuel line connector. Once done, you must remove the canister and start over. I did this on three occasions.  Once lit, the Optimus Vega has a very nice flame adjustment which allowed me to reduce the flame to a simmer or really crank it up to produce a roaring flame. 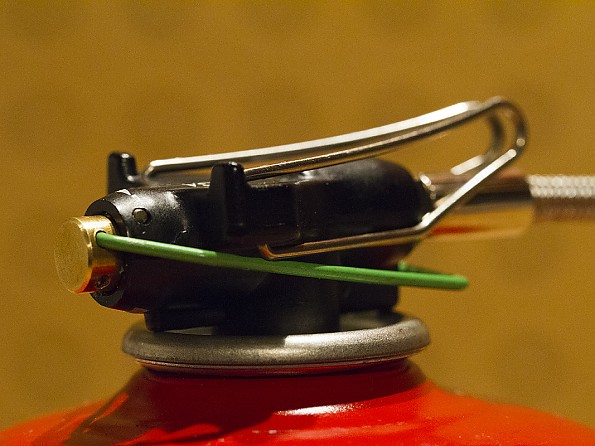 Care must be taken not to trap the adjustment knob.

This stove can be directly compared to the MSR Windpro II, which also has the ability to turn the fuel canister over.  One nice feature the Vega has is the built-in feet to stabilize the canister when it’s inverted.  Flip out the wire feet and you instantly get a 4 inch wide, three point base, to hold the canister.  I found that this worked very well, even in the snow and on slanted surfaces.

I had planned on using the stove on a winter trip to Death Valley National Park, but when a freak winter storm dropped 8-10 inches in the nearby Laguna Mountains, I grabbed the opportunity for some cold weather camping and to test the Optimus Vega as well.  The ambient temperature the morning of the test was taken was 24 degrees Fahrenheit / -4.4 Celcius. 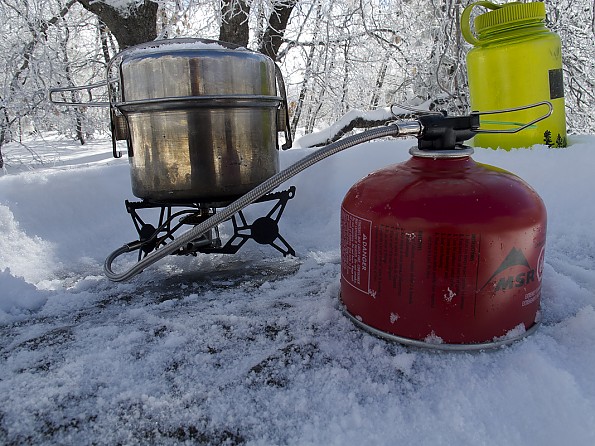 I have hot tea and instant oatmeal most every morning when camping.  My small stainless steel pot holds three cups of water.  I heated water two times, once with the canister in the regular position, and once inverted.  Both the fuel in the canister and the water was cold, having sat in the tent all night.

The first boil, with the canister in the regular position, took almost 10 minutes; a tad longer than I was expecting.  The second boil, again with three cups of cold water, but with the canister inverted so it was in “4 season mode” took eight minutes.  Two minutes less.  Not a substantial amount, but as the old saying goes, “a watched pot never boils,” so the shortened boil time was appreciated.

It should be noted that the manufacture states that the boil times per liter of water is approx. 4.5 minutes. While I did not get anywhere near that time in snowy, winter conditions, I did experience similar times when using the stove on a subsequent trip in much warmer weather and with no wind. 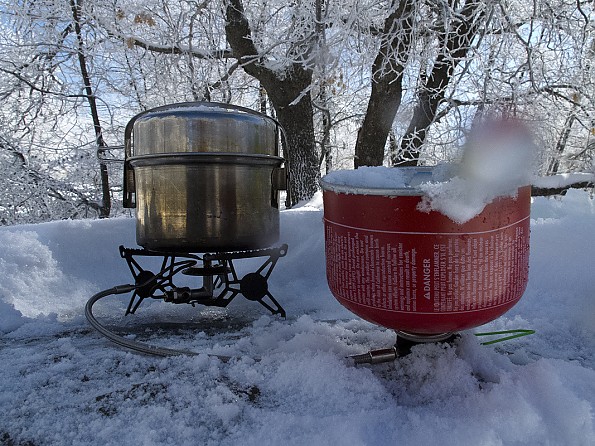 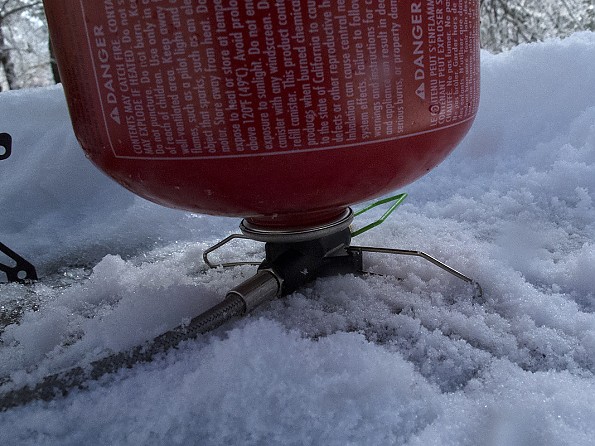 I ran into a minor problem when using the Optimus Vega with the canister inverted.  Because the stove is now burning actual liquid fuel instead of gas, I ended up with a fuel leak (flare up) just before where the fuel enters the burner, by the vent hole.  To be honest, I was a tad worried something might catch on fire (or blow up!).  After about a minute this problem rectified itself and never happened again.

Thinking back, I’m reasonably sure this was “pilot error” and not a design flaw.  But it was a lesson learned and something that should be mentioned; always light the stove with the canister in its normal position, then, if needed, slowly turn the canister over to take advantage of the “4-season mode.” 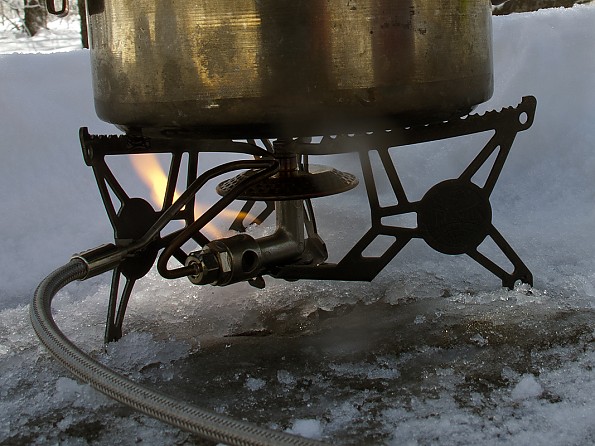 Personally, I think the Optimus Vega stove is a winner.  It’s small, lightweight, and works well in both warm and cold climes. Its small size is ideal for the weight-minded hiker and takes up very little room in your pack. The stove can handle both a small or fairly large pot, which makes it suitable for small groups or just a single hiker. Highly recommended.

Source: received for testing via the Trailspace Review Corps (sample provided by Optimus for testing and review)

Best remote canister stove available. Lightweight and easy to set up. No extra pieces to fumble with.

When I want a canister stove this is my first choice. I prefer noisy roarer burners and the shielding of the Primus designs for use in the wind. If you are not cooking on top, this stove is slick and will get the job done well for a small patrol.

Simmer control is better than expected even in winter mode (when the valve is throttling liquid fuel). Very good with the canister upright. Low and wide makes it stable. The valve assembly and wings together are such a great design it is a wonder everyone does not copy them. No pieces to lose or break.

Now if they would only package it with a hinged windshield.