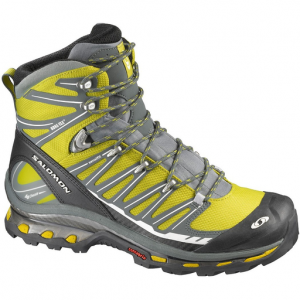 I ended up with these boots by default, but that's a long story so I'll give you the short one.

I have had Salomon footwear for many years. Their last must be the perfect fit for me as no other footwear seem to fit the way theirs do. I have a pair of Raid Wind shoes that must be some 12 years old now and still going strong.

My first pair of Salomon boots were bought a long time ago; I cannot remember the name but they lasted well until after about 3 years the sole was becoming detached. Took them back to the shop and asked if they could be repaired/resoled as they were so comfortable.

To my surprise I had a call from shop 2 weeks later saying boots were in for collection. Arrived at shop to find Salomon had replaced them for free with a new pair of their development boots!! Wow - nice letter of thanks went off to them and these nubuck boots lasted 4 years of hard use before giving up so now what!

Off to Cotswold Outdoors shop to look. Tried various makes, Meindl, Scarpa, Asolo but always came back to Salomon and walked out the shop with pair of Quest 4D GTX which were so light compared to old boots and were perfect fit. These lasted some 18 months before sadly they leaked.

Found Salomon's UK address and posted to them asking if they could repair. Sadly, no, but if I could provide proof of purchase they would replace as still in good condition - new pair of same appeared FOC. These lasted another 16 months of hard wear but again leaked so embarrassing letter to Salomon and lo & behold the Cosmic 4D 2 GTX arrived back in May - bright green/yellow. Even lighter still and I could now see Salomon have worked on the design to improve the area others had leaked.

I have now given these some considerable abuse round the Lake District and Scottish Highlands, even fording rivers and my feet have now stayed 100% dry and warm. Yeh, the colour stands out but is a good talking point and you never lose them after a group walk. Amazingly after constant wetting and scrubbing the colour has stayed the same as when they first arrived.

The grip is excellent in wet or dry on loose scree or over rocks but the only worrying area is very very smooth surfaces like in shopping malls. They are like skates when that surface is wet although not many malls in the hills.

So all in I love the product and cannot praise Salomon customer services enough. Great bunch but I just hope I don't need to contact them again in the future apart from telling them how good these boots are. Well done, Salomon.

I have a pair of Salomons, full leather with Mountain Contagrip soles. They're four years old now and the soles have hardly any signs of wear! Great boots and like you, the last seems the best one for my feet.

Because I know they fit perfectly I keep my eyes open for bargains and now have 4 pairs of shoes plus the boots. You can't have too many pairs of shoes and need them for all occasions. I took dog out for walk last night in a torrential storm we had with 55 mph winds and rain. I remained dry even though I felt the roads were rivers - dog loved it but then he is a lab and likes water. My waterproofs are Rab Bergen and Latok trousers - love em.

I use salomon sport shoes for long period and this are no good for climbing and to soft like socks after next day of hike in wild, for part of small or long rock tour little danger on steps places and bad on front just because they are not cemented.

I use salomon sport shoes for long period and this are no good for climbing and to soft like socks after next day of hike in wild, for part of small or long rock tour little danger on steps places and bad on front just because they are not cemented.

For walking and treking they are just fine for winter one day tour!