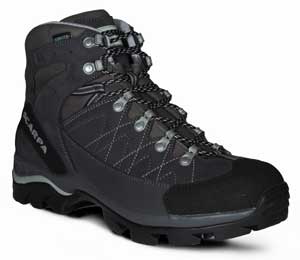 I bought a pair after using Keen and Vasquez for years, I have hiked, backpacked and hunted for 50 years. I THOUGHT I had broken them in after short hikes, wear to work and yard work for three months.

Went to Glacier, both my big toenails were toast after the first 10-mile day. Lucky I had my New Balance running shoes or my trip would have been finished. I took them back to Serra Trading Post with no problems. Went back to my old standby Keen and Vasquez.

See Summary, as far as I'm concerned they sucked and were not worth the money!

After multiple "tries" finding some hiking/backpacking boots that actually fit I purchased the Scarpa Bhutan GTX boots. I have a narrow foot and my heels are really the issue. The last pair of boots that I had that actually fit before the Bhutan boots were the original Italian made Vasque Sundowner boots back in 1996. That's a long time worrying about taping ankles, worrying about socks, researching different lacing options and using Moleskin on my heels.

I was growing sick and tired of outfitters telling me that every boot has these issues coupled with my type of foot. I was not backing down easy and learned of Scarpa and their focus on narrower, lower-volume feet. I wanted a full grain leather boot and liked the shiny leather classic look, but could not afford some of the boots like that. I also tried on the Asolo TPS 520 GV which seemed to fit well but it was like wearing lead on my feet.

I finally had to opportunity to try the Bhutan and it reminded me of the fit of my old Sundowner boots but with better soles and construction. I purchased them without a lot of expectations. I had previously had the Garmont Synchro GTX and it fit good when purchased, but it quickly became the worst blister-causing boot I had ever owned. Wearing them in the store and after miles of use is another thing.

So far I have put around 15 miles on the Bhutans and they feel great. They are light and durable at the same time. Some reviewers said they made their feet hot, but I think they are very breathable. I would recommend them to others with a low-volume foot. The Vibram soles they have on them are extremely grippy. Last weekend I hiked down a slope covered with frost covered leaves and I never lost traction.

These boots are the best made out there. Very strong, durable and waterproof GTX (gore-tex). I highly recommend these to any heavy hikers and backpackers!