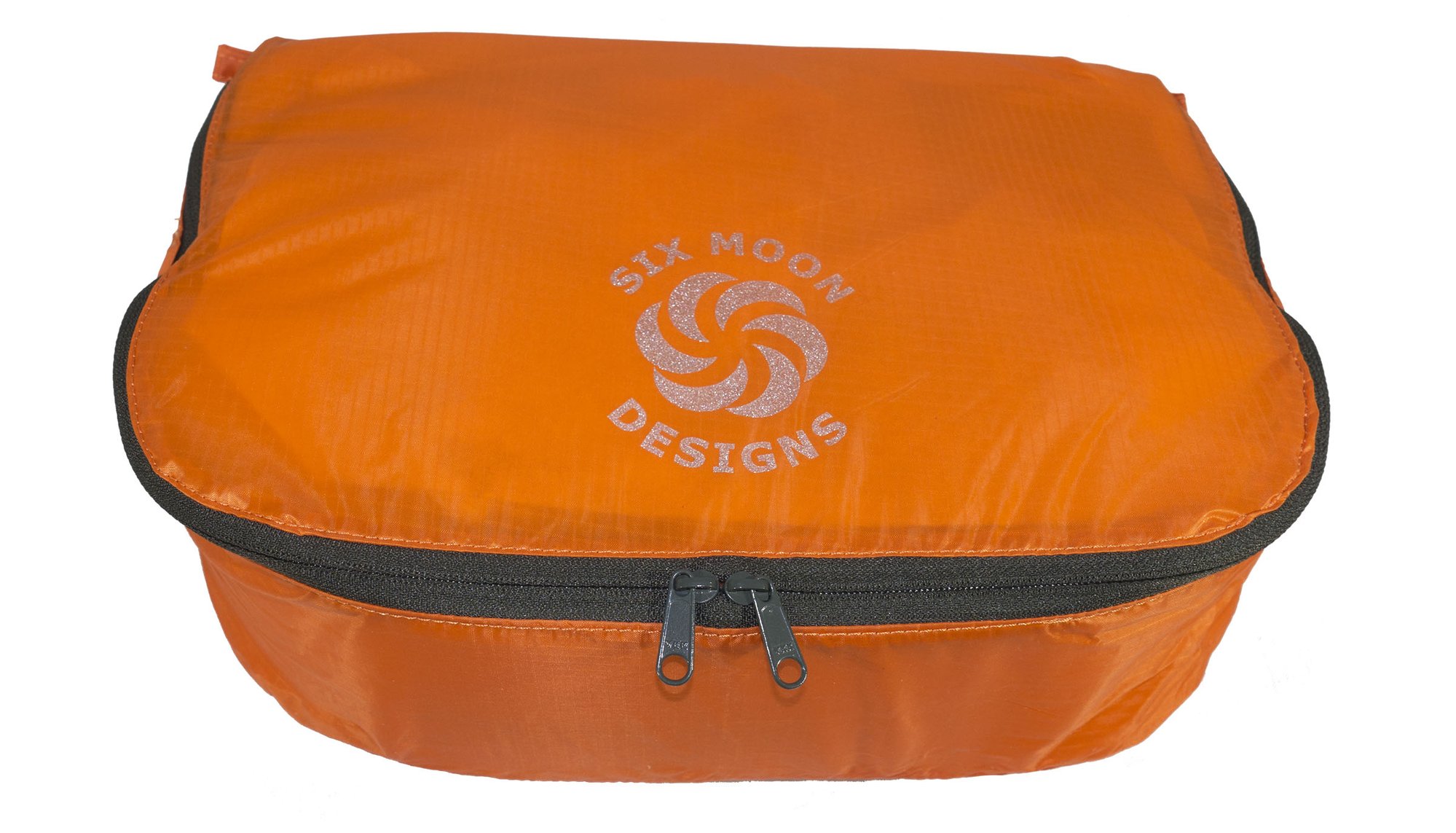 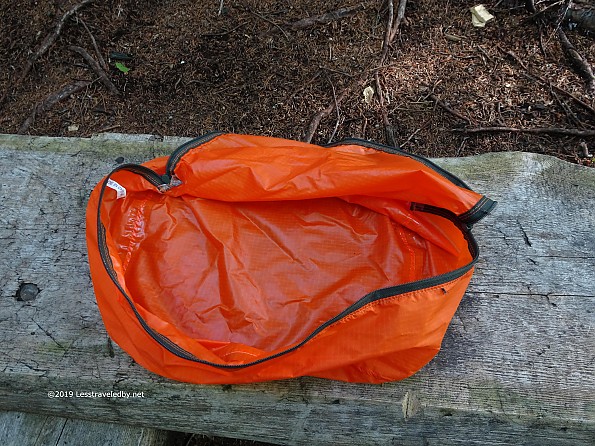 A simple product that makes a lot of sense, the SMD Pack Pod is intended to match the shape of your pack, letting you make full use of limited space. It provides some water resistance, but isn't meant to be a dry bag. 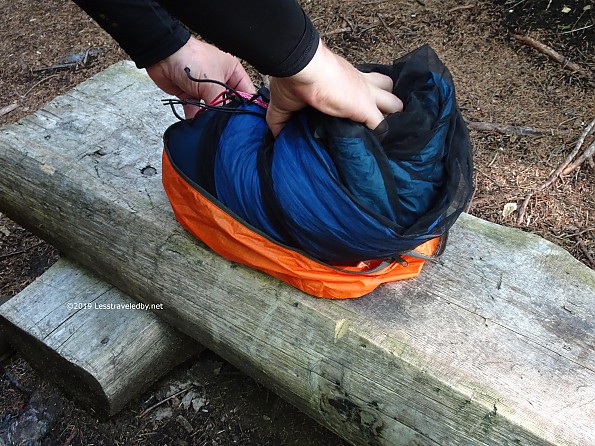 Being a piece of lightweight nylon with only stitching and a zipper for support the Pack Pods feel as though they might be hard to cram stuff into. Once I started using them I found that wasn't the case at all. Using my hammock with bug net and underquilt as an example in this series of pictures you can see how the shape of the pod takes form as it fills. 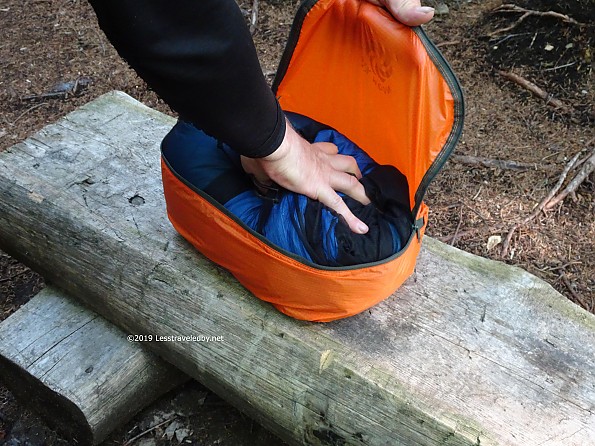 With the entire bundle inside, a bit of light compression can be attained by pressing down with one hand while pulling the lid over the top. 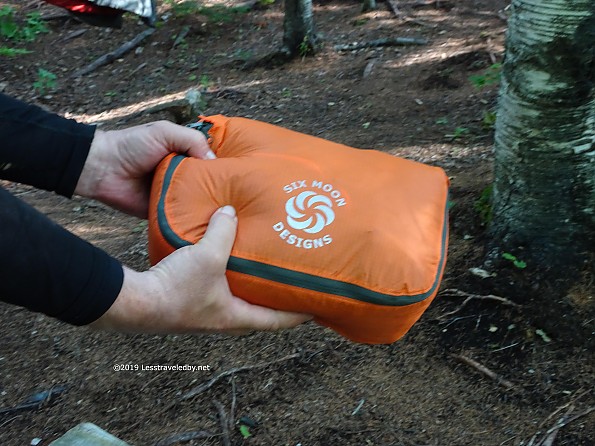 Once zipped the pods are the perfect size to drop into the main compartment of a similarly sized pack. The shape makes good use of space horizontally and stacks well vertically. 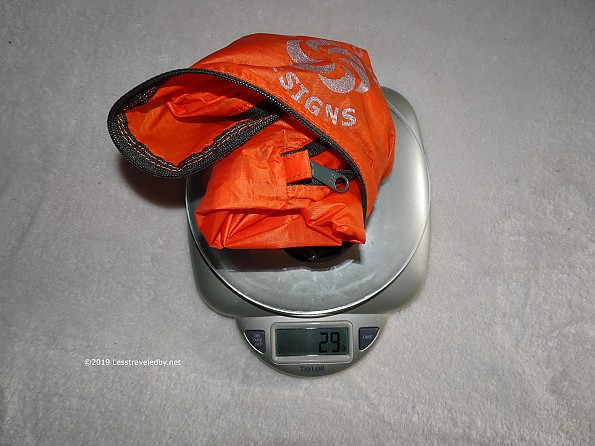 Six Moon Designs knows how to put together shelters and packs, so it is no surprise that the Pack Pods are well made. Stitching is even throughout with the zipper double stitched to the pouch. Corner seams are taped to increase water resistance and the zipper a fine toothed, nylon YKK.

After a four-month testing period that saw about 40 nights on trail the pods appear as they did when new. Stitching is still even. No material stretching. Zippers in perfect condition and working order. 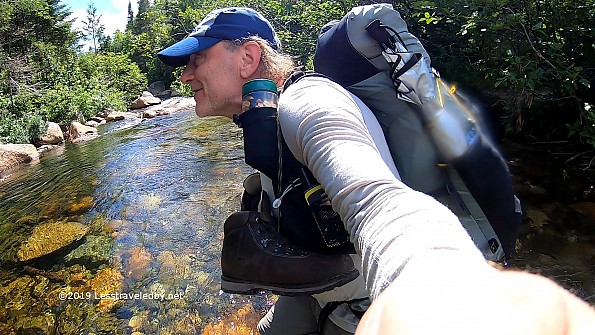 I used the Six Moon Designs Pack Pods extensively this spring and summer for a total of about 40 trail nights. Highlights included distance hiking on NH's Cohos Trail plus two weeks in Baxter State Park. Almost all use was with the SMD Minimalist which I tested and reviewed for the Trailspace GRC, but I also used one or more pods with my Cotopaxi Luzon 18 as well as one four-day family trip that required the Seek Outside Unaweep 6300 for Daddy Pack duty. Contents included soft items such as clothing and hammock plus hard items such as electronics, kettle, and other gear. 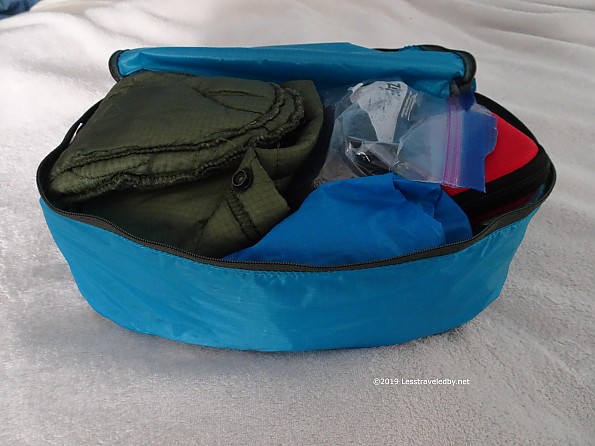 A bit skeptical when the pods first arrived I was soon a fan. Having purchased three of the pods in different colors I was able to create a color coded system of organization. One Pack Pod held my hammock with bug net and underquilt. The second contained my camp clothes plus an extra set of socks and underwear on longer trips. The third pod was used to collect and corral the odds and ends: Kettle, FAK, electronics, hygiene, etc. 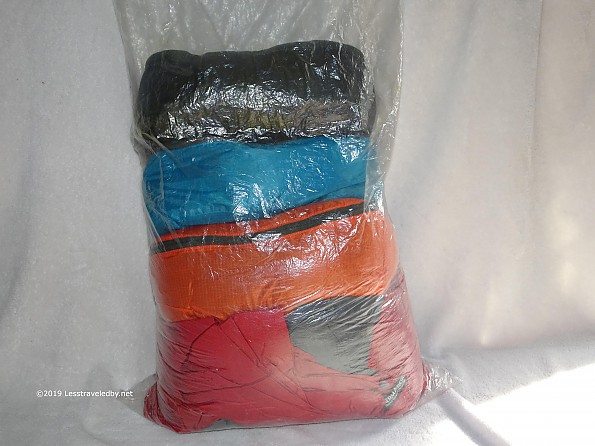 I loaded up one of the Nylofume Pack Liner Bags without a pack so you can see how the Pack Pods function inside. By putting the quilt in the bottom and then adding the pods I could press down on the entire stack to compress the quilt before rolling the bag over the top. This part of the load is able to take full advantage of available pack space, expanding horizontally as it is compressed vertically. 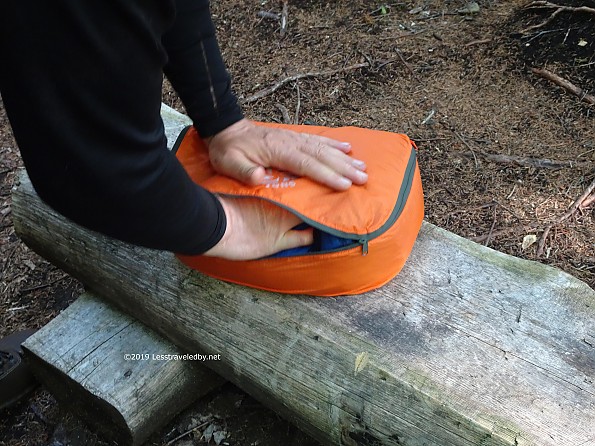 The only negative in my experience was the mostly positively received zipper. In almost all cases I found the zipper to be functional and easy to use. The one exception was its appetite for bug netting. It pulled easily in either direction and while I am not sure it was needed, SMD even used a double pull. Even other soft items like clothing didn't pose any problem. Bug netting however seemed to really want to get between the teeth of the zipper. Knowing that, I packed my hammock carefully every time, trying to keep my hand between zipper and net. Still, there were several incidents that required some patience to resolve without destroying the net. 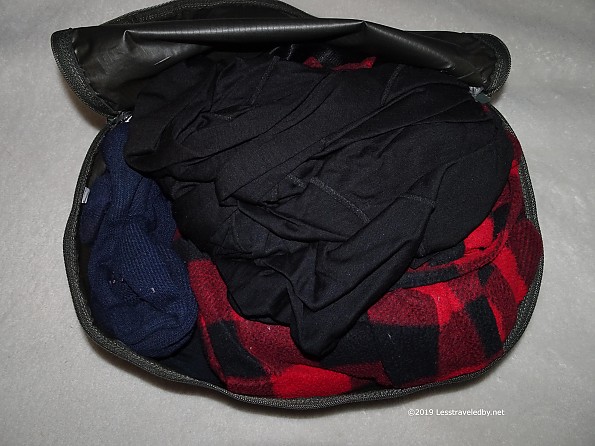 I was tempted to list the price as a negative as well, but on consideration realized that I had appreciated the function of the SMD Pack Pods enough to justify the cost. Being organized is a huge timesaver for me on trail. Knowing where stuff is or where it is supposed to go comes in handy when exhausted at the end of a long day or when breaking down camp at dawn. The Pack Pods slid into and out of the pack easily, meaning I could access items even on trail without much effort.

The best use of course is in a pack that closely matches their dimensions. In a smaller pack they can't be stacked or expand fully. In a larger pack they swim around. My experience was very positive despite the attempts to eat my netting. I did drop my rating by a full star based on the amount of cussing that fault did cause. Add a little flap to guard the inside of the zipper and these things would warrant all the stars.

Other than that I found the Six Moon Designs Pack Pod to be a very useful addition to my pack and a purchase I'm comfortable recommending to folks using a similar sized backpack.

I used the Pack Pods on about 40 trail nights over a four-month period.

Thanks for this guy! I've been considering the HMG cubes, or those from MLD, but since I have the Minimalist, I'll be grabbing these up. Nice it fits your hammock and UQ. Which of both do you have? I also hammock and am curious to know how big the UQ is.

@DonP The picture shows an 11' Dutch Netless with a 30° shorty underquilt. Testing shows that the Pack Pod will work with full length 10° underquilt as well. Just needs a bit more cramming. 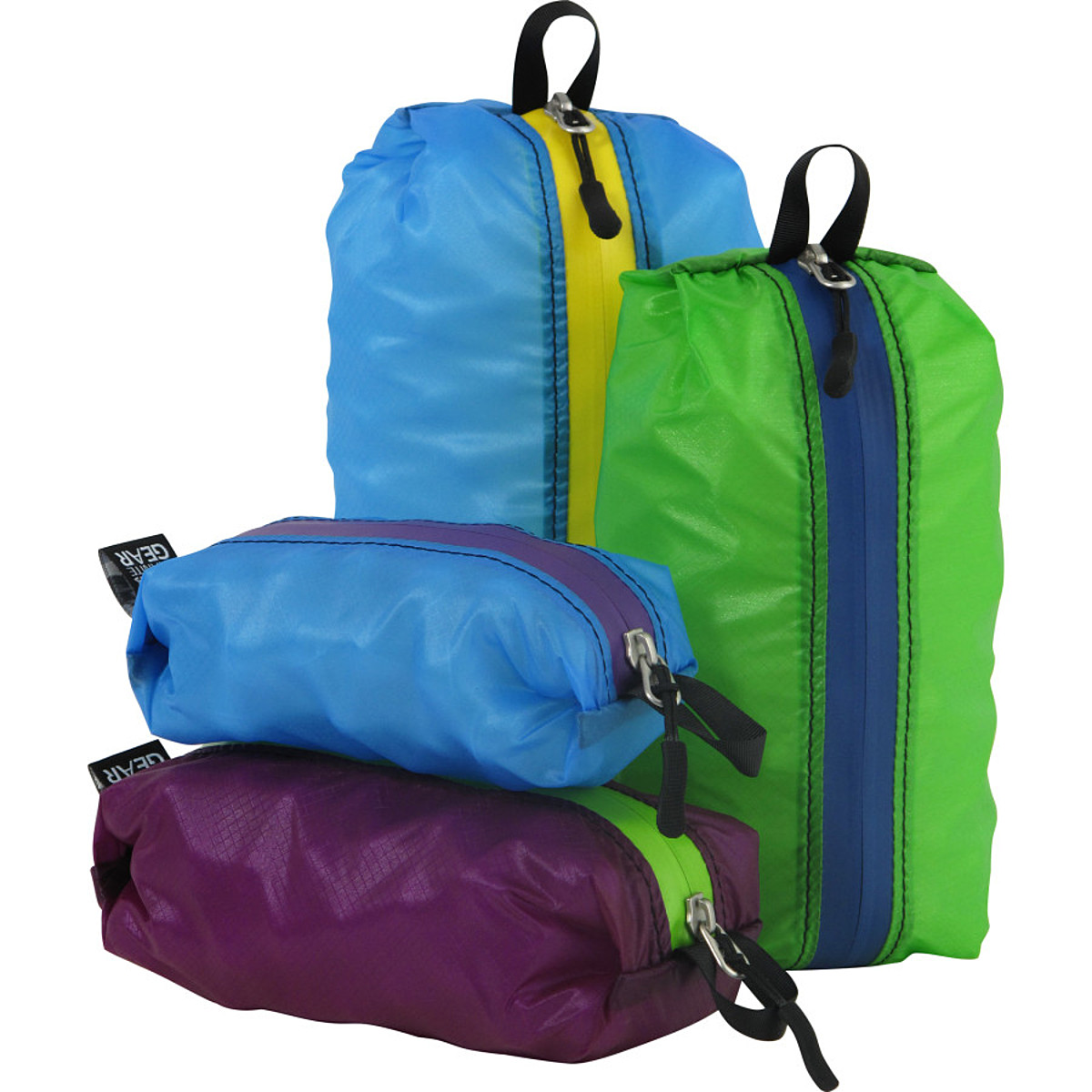 Our community of gear reviewers has field-tested and rated the top stuff sacks available.