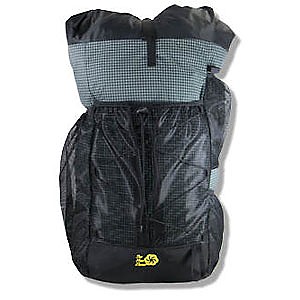 I recommend the SMD Starlite for a through hiker or a person who starts trips with heavy loads. It is better at carrying heavy loads than other lightweight packs I have used and weighs very little more than all but the very lightweight packs. It is well made, durable and can be furnished in several shoulder-strap and hip-belt configurations. It has an easily adjustable torso length.

I have used the Six Moons Design (SMD) Starlite pack for nearly two years and 400+ miles and feel that I have gained a good idea of its strengths and weaknesses. During this time I used the pack with, and without, the aluminum stay and with loads, including food and water, ranging from 16 lb to 35 lb.

Several of these trips entailed hauling one to two gallons of water; the through-hike trip involved carrying eight days of food and an initial half gallon of water. The heaviest load I carried was 35 pounds including a bear canister. Temperatures ranged from 26°F to 105°F with light snow or light to heavy rain on several of the trips.

Much of the backpacking that I do involves starting a trip with a heavy load. Six Moons Designs states that the Starlite pack is designed with the through-hiker in mind. It is designed to handle an occasional heavy load yet is light enough that it helps to reduce the overall load. When I purchased the SMD Starlite pack, I was looking for a light weight pack that would allow me to carry starting loads of up to 35 pounds and occasionally 40 pounds yet would contribute to a lower pack base weight. On paper, the Starlite met these criteria.

The pack is roomy with 3000 cubic inches or 49 liters in the main compartment and another 1200 cubic inches in the side and front pockets and extension collar. This pack will accommodate my large (BV-500) bear canister horizontally at the bottom of the main pack compartment.

The Starlite comes with optional hip belt pockets and an optional and removable U-shaped aluminum stay. I ordered both options with my pack. After having used the pack, I would definitely recommend choosing the stay option for anyone who anticipates carrying more than about 25 lb. in this pack for anything over a day or two.

The pack is designed with a sleeping pad pocket positioned on the back of the pack to provide stiffness and the basic frame to the pack.  For loads of less than 20 pounds the sleeping pad will provide good stiffness and load transfer and the optional stay is not needed.  The pad pocket is accessible via a zippered opening so the pad may be removed independently of the other pack contents.

The pack has a one large and two smaller mesh side pockets, a mesh center pocket and a 400 cubic inch extension collar to provide extra capacity if/when needed. The top of the pack closes with a Velcro-sealed, roll-top closure like those used on river-running dry-bags. There is a marginally useful compression system on the front pocket.  Personally, I found this to be of little use and have removed it to save about an ounce of pack weight.  As I used the pack for this report, with hip belt pockets and the U-shaped stay, it weighed 29.7 oz.

I found the Starlite to be a well thought-out, competently designed and easy to use pack. The arrangement of the outside mesh pockets is good:  one large pocket on the left-hand side of the pack and two smaller pockets on the right-hand side.  The large pocket is good for the few longer items I carry such as tent poles and my rolled Therm-a-Rest sleeping pad (more about this later).  The smaller pockets are well-sized for water bottles and food bags.  The center outside pocket is useful for wet items such as a rain fly, tarp or rain gear.  The expansion collar does provide flexibility for changing load volumes.  I particularly like the optional hip belt pockets.  Unlike those on some other packs I have used, I can zip and unzip them without needing to contort my arthritic arms and hands.

With lighter loads, (<25 pounds), the pack rides quite comfortably.  When the pack is properly adjusted, the load rests largely on the hips and the shoulder straps serve to control and stabilize the load.  A sternum strap is provided but I have never used it.  There are also load lifter and hip belt stabilizer straps provided to adjust and fine-tune the way the pack rides.  And, importantly, there is a Velcro, ladder-type adjustment provided for the shoulder straps so people of different torso lengths can be comfortably fitted.  Note that, with this pack, it is important that the shoulder straps be properly located; if not, the hip belt will not rest properly on the hip bones and the load will ride heavily on the shoulders.

With a heavier load, the pack is useable but not particularly comfortable.  When using a sleeping pad to stiffen the pack, with or without the stay, the pack tended to pull against my shoulders; this quickly became tiring.  The problem appears to lie with using the sleeping pad as a back pad and pack frame with heavy loads.  The issue is that the thickness of the sleeping pad frame causes the heavier part of the load to be cantilevered away from ones back. Typically a folded pad positions the load 1.5 to over 2.0 inches away from ones back and gives the heavier part of the load leverage against the shoulder straps.  With this pack the cantilever effect is especially noticeable with loads in excess of 25 pounds.  This is certainly tolerable for a few days but as a steady diet, it would have me thinking of using another pack. This is a design character not exclusive to this particular pack; all packs using a folded sleeping pad as a "frame sheet" will have the same problem. My homemade G-4 pack has the same problem.

As noted, I have used the pack on a number of trips and, for my hiking style, it has served me well. On my August, 2012, 100+ miles section-hike of the Pacific Crest Trail I started out heavily-laden and for the first few days I had tired shoulders from the pack. On this trip I was using a self-inflating mattress and the stay with the pack and the pad positioned the load at least 2 inches (5 cm) off my back. As the load decreased, the pack became more and more comfortable and the pad "frame sheet" ever more workable; the last few days of the hike and the few days before my resupply were a real pleasure.

This spring, I spent three days exploring part of the Rincon Mountains in Arizona. For this trip I had to initally carry four liters (1+ gallon) of water weighing about 9 pounds. My pack starting weight for this trip was over 25 pounds. On this trip, I decided not to use the sleeping pad as part of the pack frame.  Instead, I used the optional stay together with one 11 inch by 20 inch piece of 0.4 inch closed cell foam as padding.  I carried my Therm-a-Rest sleeping pad rolled and inserted in the large side pocket of the pack. With the load closer to my back, the pack pulled less against my shoulders and was much more comfortable with the load.  I plan to use the pack this way in the future.  The small foam pad adds about 1.5 oz to the load.

I plan to re-hike the John Muir Trail in summer 2013; I will probably use this pack for the trip.

I recommend the SMD Starlite for a through hiker or a person who starts trips with heavy loads.  It is better at carrying heavy loads than are other light weight packs I have used and weighs very little more than all but the very light weight packs. It is well made, durable and can be furnished in several shoulder-strap and hip-belt configurations.  It has an easily adjustable torso length. As extra-cost options, it can be provided with hip-belt pockets and an aluminum U-shaped stay; I recommend both options.  Thus, the pack can be accommodated to almost every hiker.

It has ample volume for the through-hiker even though using a bear canister; it is sturdily constructed and well thought out. In the rains that I have experienced while using it, it has kept its contents dry.  For those who plan on carrying  heavier loads a significant portion of the time the pack can be made more comfortable, or at least was for me, by using separate back padding and sleeping pad.

I would recommend this pack to anyone who has a hiking style similar to mine.