The Hybrid Summit Solo Titanium Cookset has been discontinued. If you're looking for something new, check out the best pots and pans for 2022. 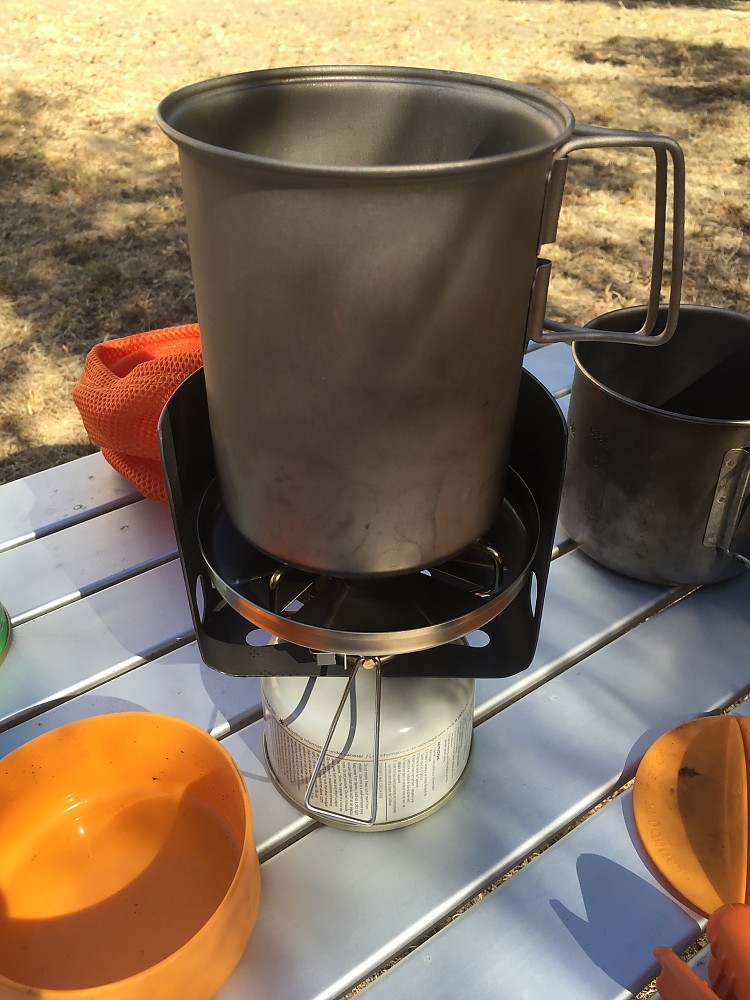 Snow Peak's attempt at an "all-in-one" solo cookset, whose titanium and silicone components don't quite go together as well as peanut butter and jelly. The pliability of the silicone, while making each of the items (lid and cup) multi-functional, also makes it too flimsy to constitute as legitimate cookware. Take the pot and lid with, leave the cup at home. 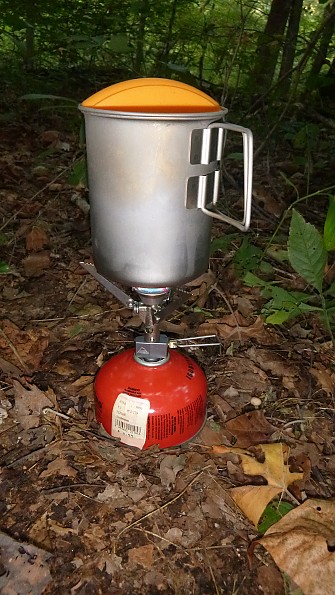 My last cookpot was an aluminum one from MSR. While the "mason jar" style locking mechanism made it a great carrying case, it was a large, heavy, and ultimately unsteady pot. Moreover, 1.1L was overkill when the most I'd boil was 16 oz of water, either for morning coffee, or a freeze-dried dinner.

I have cooked meals that require simmering and would advise that you keep an eye on the pot and stir frequently to avoid burning your food. The small bottom diameter of the cook pot paired with a high-intensity, centered flame will create a definite hot spot, and you'll want to stir to ensure your food is heated and cooked evenly.

Being a single-walled titanium pot, it will lose heat as quickly as it will absorb it, so either use a pot cozy or transfer the contents to a secondary mug or container to keep them warm.

I found a floor display model for sale on eBay. $36. REI wanted $55. It meant having to live with the titanium being a little pawed-up from customers - a small price to pay for a $19 discount.

Generally, the lighter you go, the more you'll pay. This set is no exception to that statement.

The complete system weighs-in at 6.1 oz, and fits nicely in the provided mesh stuff sack.

"Compatibility with other Snow Peak products:
Cookset can fit small canister of GigaPower fuel and a GigaPower stove inside it.
Cookset can next inside a Snow Peak Trek 900 Pot/Pan Set."

I own this cookset, and a Mini Hozuki lantern, and that's as much as I own from SP. Can't vouch for either of the aforementioned claims.

However, I can tell you this much.

I can fit my STS Delta Mug inside the pot, and inside the mug I fit my MSR MicroRocket (in case with piezo igniter), a box of matches, a mini BIC lighter, an LMF FireSteel, and my MSR folding spoon.

With the exception of the fuel canister, I'm able to fit my entire camp kitchen inside this cookset. It will fit a 3.9 oz IsoPro fuel canister, and my MicroRocket stove (minus the plastic case and piezo igniter), but I'd rather fit my smaller accessories inside this set and store my fuel canister elsewhere.

There's actually enough room in the included stuff sack to store your canister atop the entire cookset. 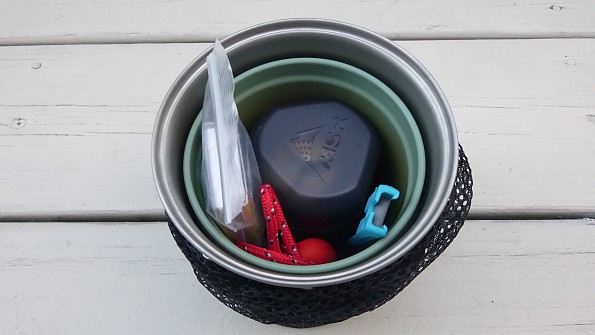 Let's go through each of the compenents, one-by-one, and see how they measure-up:

Last I checked, for a cozy to have a functional amount of insulating value, it has to cover more than the bottom third of the pot if it hopes to hold any heat in. If you ran out of hands because of your juggling hobby, and needed to set this in your lap, I suppose you could. However, the silicone doesn't make the titanium cool to the touch. It simply makes it less hot. Even if this 1/3rd-a-cozy kept your hands from being burned, you'd still be sipping from the titanium lip of the pot.

Claim: "The smooth silicone cup can be turned inside out for easy cleaning."

SP also makes a point of advertising these are easy to clean, since the pliable silicone can be flipped inside-out to clear the interior as easily as you'd clean the exterior.

Great, however, if something's flimsy enough for me to flip it inside-out, it's not going to be firm-walled enough to me to pour my morning coffee into it. Moreover, it's got a small capacity that I don't think is of much use unless you're sipping espresso.

Ultimately, it weighs too much and does too little to prove trail-worthy. I brought it with on the first trip, learned the aforementioned lessons, and have left it at home for every trip thereafter.

In good news, it's very packable in your closet?

Claim: "The lid is designed to allow steam to ventilate and can also be used as a hotpad."

This is the best thing going for this cookset. 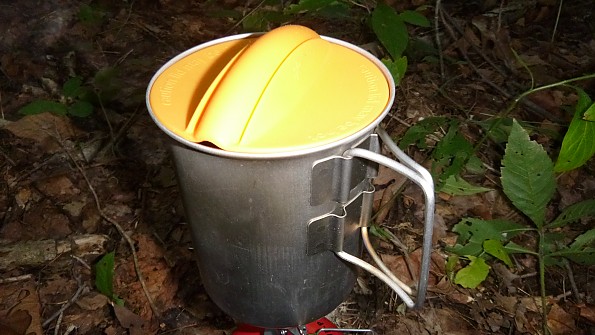 The lid's "hump" is hollow, and will wrap around the unfolded handles on the cook pot. 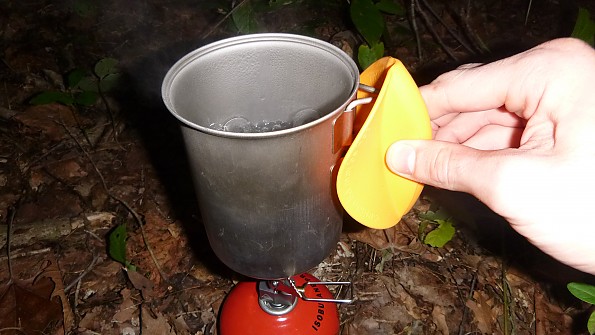 Where the hump meets the lid's edges, a small, semi-circular notch is made to allow steam to escape. This avoids turning the lidded pot into a pressure-cooker time bomb, and also allows the user to know when his water begins to boil without removing the lid to check on it.

I've two problems with this lid, however.

1.) "Caution lid may be hot." I understand this warning if the lid were only intended to be used as just that: a lid. The typical user is going to want to remove the lid, and immediately use it as a pot-gripper to remove his pot from the flame. Having to choose between using it for only one of the two intended functionas negates its multifunctionality, and leaves you either with a longer boil time, or the need to find something else to grip it with.

2.) Silicone retains odors like Alacatraz retains prisoners - neither of 'em are going anywhere. I once made the mistake of leaving my meal to sit, unstirred, in my pot. It burned the food, and while it was easy to scrape the burned remnants off the titanium pot, the lid smelled like burned food. I had to soak it overnight in a Bronner's bubble bath (so to speak) before it came out smelling clean again. Luckily I made that mistake on the last meal of a trip, otherwise, I'd have been stuck with that odor the rest my trip.

Claims: None. It's a titanium pot - were you expecting some claims?

The titanium construction is durable, lightweight, and doesn't retain food scraps or odors. It will retain fingerprints, so if you're planning on committing a crime and bringing this cookset along for the heist, you'll likely be caught.

It holds the water I use for coffee and meals (16 oz for either) easily, and isn't ever so full I'd have to worry about it boiling over.

It holds all of my camp kitchen - save my fuel canister - with ease.

While the capacity is generous, I wish the pot was shorter and more stout. The tall and narrow design is just barely large enough to fit on the tripod arms of my canister stove, demonstrated in the picture below: 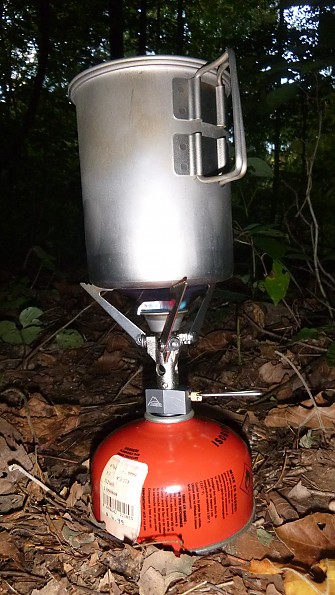 Moreover, the rounded bottom edges mean you'll have to be mindful of where you set it down, as they can cause instability.

My biggest problem with the pot are the folding, collapsible handles.

Dangerously so, depending on the stove you're using.

I wanted to use this pot with an alcohol stove, but the handles were too close to the flames running up the side for me to be able to grip it safely. I was using a windscreen and wasn't letting the flame run wild, and did honestly make my best attempt to make it compatible. The only alcohol stove I can foresee being compatible with this cookset would be a small alochol stove on the scale of the Blue-Mini from Ultralight Designs.

Since the handles fold back and around the mug, and since the mesh stuff sack isn't impacted by the handles, they could easily remedy this problem by simply making them longer. It adds more distance between the user and flame, and allows more leverage for a firmer, stable grip.

Snow Peak has a great product, but it could afford a little more thoughtfulness in the practical components of this cookset.

It doesn't need the cup.

Added weight and absolutely no added or gained functionality. A better-insulating cozy that covers the entire pot could be made at home, weigh less, and cost less than whatever this silicone one was manufactured for.

The lid could be made more robust and thicker, especially if weight was lost by not including a cup with this cookset. It does work wonderfully as a lid and just as wonderfully as a pot gripper, but it does easily get hot to the touch. Caution, too, that it will retain food odors if not washed thoroughly.

The pot's everything a titanium pot should be, but could afford a shorter, squattier design that would give it a larger bottom diameter, enabling it to sit on stoves with more stability.

I agree, the cup is not really needed, and the pot would be more practical if wider / shorter.

Depending on the model, Four Dog Stoves makes a titanium lid for many Snow Peak Ti pots/mugs... kind of a pricey concession.. but it is an option.

You say "backpacking trips the past few months", but per your trip reports you've only done two. How many were there, and what conditoions did you run into?

With the amount of outdoor products, materials, and weight, this can really add up. With such limited space it is important to do the research. Trailspace has become such a valuable resource in all these aspects!

Combining the best material, cook time, and compatibility, the Snow Peak Hybrid Summit Solo Titanium Cookset SCS-004TH has become the Swiss army knife of cooksets. It is very simple to also incorporate other brand cookset materials to this mug. A true workhorse for one economical price!

This has been a lifesaving tool to boil water with medical kits, keeping nutrients in a fatigued body and the ability to survive longer in harsh environmental elements of the outdoors!

Very limited experience with other cooksets, because this item matches up against many cooksets (I have researched) and can be hybridized to other minor pieces of additional cooksets!

I'm glad to hear you find Trailspace a valuable resource, Ramiro. Thanks for sharing your first gear review with us. We'd love to read more of your reviews.

We'll look forward to reading them!