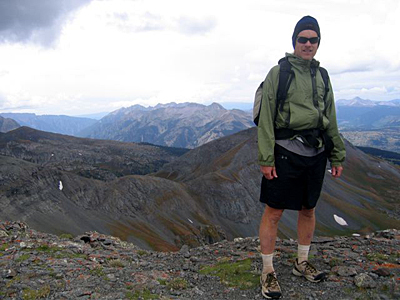 Henry Shires hikes along the Continental Divide Trail in the Colorado Weminuche, near Silverton, Colo., in the fall of 2008. (Credit: Henry Shires)

The first tarptent was born a decade ago, when Shires was planning a through-hike of the Pacific Crest Trail. All Shires wanted in the spring of 1999 was to avoid hauling a four-pound backpacking tent for 2,650 miles from Mexico to Canada along the PCT. There wasn’t much on the market back then, so he sewed his own low-slung shelter, combining lightweight nylon with bug netting, weighing less than two pounds.

Something about waking, walking, sleeping and repeating every day for five months turned Shires the grubby hiker into Shires the can-do tentmaker.

“I came home knowing that success is all about having a dream and then doing everything you can, day in and day out, in sickness and in health, to make it happen,” Shires recalls. “I just don't think that kind of rooted knowledge can be had from the classroom or an office job.”

Like so many long-trail veterans, Shires had an urge to share his knowledge, so he posted his first tarp/tent design online.

Soon hikers started asking if he might be interested in selling one already sewn. He didn’t feel much like sewing it himself, so he found a friend of a friend who knew somebody who knew somebody. Before long he had a four-month backlog and had to find a factory in Seattle to sew his tents.

In 2002, Shires launched Tarptent.com to sell two models: the Squall and the Virga. He envisioned a hobby that might sell a hundred tents a year. If only. Word on his shelters got out, and he found his spare time shriveling as he coped with rising demand.

Shires’s fate was sealed in 2004, when a Backpacker magazine gear guide featured his tents prominently, juicing demand even higher. His plans to become a physics teacher took a backseat to filling Tarptent orders.

Since the early days, each new hiking season has brought minor and major improvements to Shires’s line of Tarptents. His lightweight tents compromise here and there to shave weight, so folks are always sending suggestions to make one a little better. 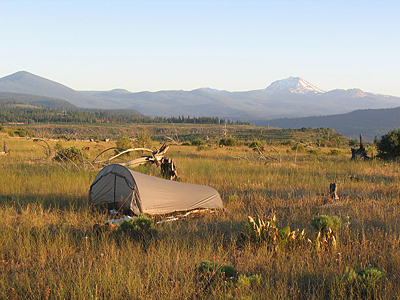 Shires’ shelters are not particularly cheap ($175 to $295) in a world where Walmart sells $50 dome tents. They’re made of lightweight silicone-impregnated nylon that is not as rugged or waterproof as the material in heavier tents you might find at REI. There’s a learning curve to getting one up.

Still, hikers keep snapping them up. And Shires keeps them coming back with unexpected customer service: he answers people’s e-mails, takes people’s calls.

Shires’s shelters hold one to three people. The oldest ones like the Cloudburst 2 ($260) and Squall 2 ($230) are low-slung, tubular creations that look like they might be the shed skin of a giant sandworm from Frank Herbert’s Dune trilogy. These shelters put Shires on the map, but they had a nagging shortcoming: not enough headroom to sit up in comfortably.

Shires solved that problem in 2006 with his most innovative design: the bulbous Rainbow line of one- and two-person tents. They use a single thin pole across the roof line and trekking poles at the bases to create a roomy, stand-alone dome tent with considerably more sitting-up headroom and half the weight of a traditional tent of similar design.

Since then, Shires has introduced a pair of minimalist, low-cost one-person Sublite shelters ($179-$199) and a beefy four-season tent called the Scarp 1 ($295).

Shires has two more tents – a four-person and a two-person – coming out this  spring. “We will have doubled our product line over the last year and it will be time to step back for awhile to do some evaluation and fine-tuning,” he says.  With a dozen models on the market, he needs to be careful about keeping supply in balance with demand.

Shires’s business is based in the foothills of the Sierra Nevada east of San Francisco. Backpackers in the Bay Area are among some of his most devoted customers. Asking them about their Tarptents is akin to asking Apple Macintosh users how much better their computers compare to a Windows-run PC.

Well, Macs still crash and Shires Tarptents have limitations: they’re more fragile than the heavier tents sold by mainstream manufacturers. All but the new Scarp 1 are strictly three-season shelters. 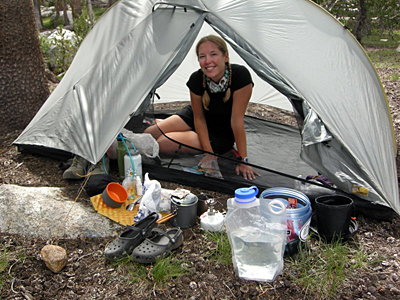 A couple summers ago I spent a weekend in the Sierra’s Emigrant Wilderness with Steve Nelson of Marin County and Rebecca Sowards-Emmerd of Sunnyvale. Both are reviewers for Backpackgeartest.org.

I asked for their Tarptent tales. Both have serious backcountry experience, and they’ve slept in a lot of tents; if Shires’s shelters were junk, they’d say so.

Sowards-Emmerd is a shameless partisan of the Shires Rainbow:

“The Rainbow is the perfect summer Sierra shelter for me,” she says. “It is fully enclosed (I hate hate hate the mosquitoes and it’s the reason I won’t use any open kind of shelter), can be pitched nearly free standing (great for those above-treeline bouldery lakes), is really sturdy, is ridiculously spacious, and I get it all for only 2 pounds.”

“Nothing’s making me wish I’d thought twice on this one,” he says. “Even though I get lots of shelters to test and can get a pro deal on ones from big companies, I chose to buy Henry’s design. I think it’s one of the best I’ve come across, and many of my friends have them and say the same. Love it — lots of headroom and space, light, easy to pitch, airy; good vestibules with flexibility on how to open and tie them off.”

Derek Palmer, a Scoutmaster in Scotts Valley, Calif., south of San Francisco, has slept in a Tarptent Squall, a tubular two-person shelter, at least 50 nights over the past four years. He raves over it like most Tarptent owners, but he does offer commonsense precautions:

“It’s not a four-season tent, so in really bad storms it can let you down,” he says. “You have to be very careful of which way you orient the tent on setup based on prevailing winds. The front can act like a big parachute if pointed in the wrong direction.

“Like most single-walled tents, freezing nights can cause moisture build-up inside. The tent does take some practice to use it effectively. I was riding out a nice rainstorm once when the tent collapsed on me. The ground had softened up and the little 1/8-inch-diameter stakes came loose. …  You do have to seam-seal this tent as well. The ridge dripped until I did this. The tent was under $200 at the time, so I didn’t expect sealed seams.”

So how does Shires account for becoming king of the Tarptent?  It's no more complicated than building good ones, getting them out on the trails, and standing behind them when things go awry.

“We do very little advertising and much of our business is viral so the more shelters we have out there, the more people get to know our brand though fellow hikers,” he says.

“Now we’re into the phase of our business where we’re starting to see a lot of repeat customers coming back for larger shelters — they now have kids — as well as smaller ones because the kids have grown up.”

I have not used a tarptent yet, I have talked to people on the trail who use them, and I have looked at some pitched on the trail.

Lots of light hikers seem to love them, one guy and his girlfriend told me: "It's way better than just a tarp man, we love it!"

Having slept under just a tarp, with muddy rain drops splashing on me, I can beleive it.

We've got a Rainshadow 2 (you can read Dave's review of it here: https://www.trailspace.com/gear/tarptent/rainshadow-2/#review12403)

My first impression was "oh my god, it's huge!" Seriously, it's quite big for a 2-man "tarp" tent.

I like having the light weight of a tarp-style shelter, while still having a floor and being able to keep out all those pesky Maine black flies. I'd buy it again.

I have one of the one person tents but for the life of me can't remember the name. Here in Michigan, especially on the upper peninsula, you need protection from mosquitos and black flies and this is the perfect solution. Mine was a little tricky to set up the first few times, everything was saggy by the end of the night (the tent, not me, but middle age does suck). It is pretty rain resistant to boot. The picture of the trail north of Lassen got me all worked up, that is going to be one of my destinations this summer. The woman in the tent was pretty darn cute, too! Henry Shires looks a lot younger than I imagined. My mental image of him was a 60 ish guy with a Van Dyke and glasses, the sort who builds electric cars in his garage and manages to look dapper even after 10 days on the trail.

Great article, thanks for doing it. But you might want to check your coordinates as I think the Sierra Nevada is just east of San Francisco and the Sierra Madre is some distance south.

Drake: that was a brain fart on my part, I can't imagine why I typed "Madre" after Sierra, unless I had a subconscious urge to see "The Treasure of the Sierra Madre" for the umpteenth time.

In the Bay Area we just call it the Sierra.