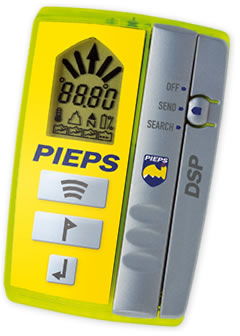 Avalanche rescue transceivers are extremely sensitive devices, and can be affected by the magnet found in a radio speaker. If the radio, or even a speaker-microphone, comes in close proximity with the avalanche transceiver, magnetic fields are present that can activate magnetic switches in the PIEPS DSP to turn it off or change it from transmit mode to search mode. This is NOT a Motorola radio issue—this is NOT a radio frequency issue—it doesn’t matter if you are using VHF, UHF, or 800 MHz radios—it’s a magnetism issue that apparently affects other transceiver brands and models as well.

The issue is being investigated and is of no immediate cause for alarm. It does not appear to affect transceivers that are carried according to the separation criteria already specified in the PIEPS DSP owner’s manual (at least 15 cm [6”] from other devices while in “send” mode, and 1.5 m [approx. 5 feet] while in “search” mode).

However, the situation should serve as a reminder for all users of avalanche transceivers to read their owner’s manual, and observe the criteria specified for separation distance between their transceiver and other potential sources of magnetic interference, regardless of brand or model.