The story of Jacks ‘R’ Better might best be called Operation Warm Fanny. 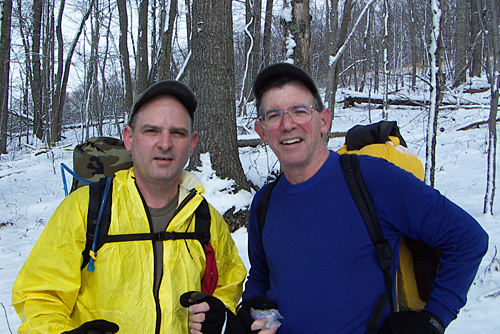 The Jacks—Jack Myers, left, and Jack Tier—along the Appalachian Trail on a hike from Catawba, N.C., to Daleville, Va., in March 2005. (Credit: Jacks ‘R’ Better)

The Jacks, who sell quilts and accessories for hammock campers, are Jack Tier and Jack Myers, retired U.S. Army officers who started hiking together in 2002. Like most hikers, their thoughts soon turned to backpacking, and like many backpackers, they came home hurting from their first night out: their packs were way too heavy, the ground too unforgiving.

But their suffering gave the former Army colonels the kernel of an idea: if they ditched their tents and got a comfy night’s sleep, they could actually enjoy staying in the woods for weeks on end. Their quest to shave pounds and sleep till dawn led them to hammocks, which were famously comfortable but infamously prone to freezing a camper’s fanny off on chilly nights. 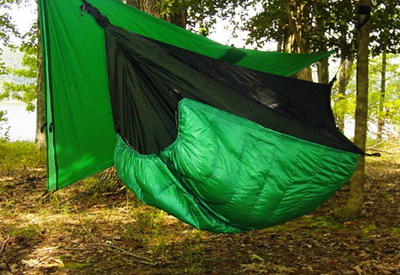 Hammock camping is simple: just stretch a fabric between two trees and cover it with a rain fly. If you’re handy with a sewing machine, stitch on some bug netting to keep the critters out. Hammocks and rain flies weigh about half as much as a double-walled tent, making them a viable alternative for backpacking in the tropics, or on any summer night above 60 degrees Fahrenheit.

Colder weather, however, poses a serious challenge to hammock campers: a sleeping bag can insulate on top, but it can’t insulate on the bottom because body weight crushes the bag’s loft, which insulates by trapping body heat. No matter how you camp, lack of loft guarantees a night of shivering.

The two Jacks tried insulating pads, which work fine on the ground but slide around in a hammock, creating cold spots that spoil a night’s sleep. They also asked around on online forums like Whiteblaze.net and learned that some hammock campers were sewing their own quilts and strapping them under their hammocks to avoid the weight-crushing challenge. These days the most in-depth discussions of hammock camping happen at hammockforums.net.

Tier and Myers latched onto the exterior-quilt idea, taught themselves to sew, and stitched their first down-filled exterior quilts in the autumn of 2003. They tested their prototypes on a chilly winter campout overlooking Virginia’s James River, slept warm and comfortably, and started drawing up plans to start the business the next day.

All those Army years paid off when they launched Jacks ‘R’ Better in 2004. 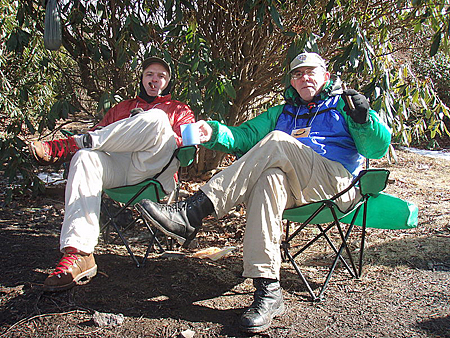 “The military is a can-do business,” said Tier, who retired in 1994 as a full colonel after 28 years in the Army. He and Myers, who retired as a lieutenant colonel in 1999 after 23 years, knew the terrain from research to development, factory floor to battlefield, on multimillion-dollar projects. “You bring all that military discipline and system development into our little cottage business.”

Jacks ‘R’ Better’s first product was The Nest under quilt, which insulates with 800-power down fill (fill power measures how much warmth-per-ounce the down delivers; higher numbers are better up to about 800, the “sweet spot” in thermal efficiency). The Nest was sewn with a slit to match with popular Hennessy Hammocks, which are known for their unusual point of entry: campers don’t get into a Hennessy from the outside edge, as you might in a backyard hammock. Instead, they stand up through a slit in the bottom of the hammock, and their body weight inside the hammock forces the slit to close.

They’ve continually added new quilts — along with accessories like tarps and down-filled hats — and introduced a new hammock in 2007, the Bear Mountain Bridge Hammock, which allows campers to sleep horizontally, unlike the banana shape most hammocks produce. They’re also developing extra-warm quilts that will withstand winter temperatures. 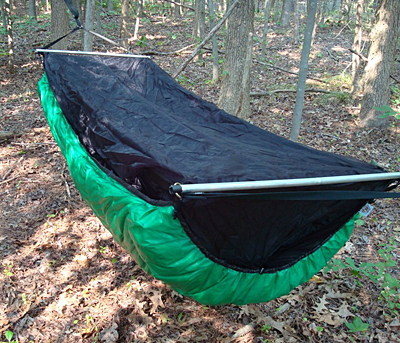 Jacks ‘R’ Better now has about a half-dozen employees and sells about 400 quilts a year. The quilts are not cheap, starting near $200-plus for a single insulating layer (in comparison, a Therm-a-rest ProLite Plus inflatable pad goes for around $100 or less), but they are American made with top-quality down and will warm just about any hammock on the planet.

The two Jacks had the right idea at the right time, says Ed Speer, author of Hammock Camping: The Complete Guide to Greater Comfort, Convenience and Freedom, who sells his own line of hammocks and accessories at www.speerhammocks.com.

“They were one of the first to offer much-needed hammock gear to the public at a time when hammock camping was catching on,” Speer says. “The mass conversion from ground camping to hammock camping is a recent phenomenon in the U.S. It first started with long-distance hikers on the Appalachian Trail in the early 2000s and today is quickly spreading throughout the general camping population.

“Crucial to that explosive growth was the availability of suitable gear, especially for bottom warmth. The Jacks grabbed that market with their down-filled under quilts.”

There’s a lot more to warming a hammock than just strapping an insulating layer on the bottom, Speer says. Without proper suspension, cold air will fill any gaps between an under quilt and the bottom of the hammock, guaranteeing an annoying night’s rest.

“Some of the proper design features were taken from pre-existing down-filled sleeping bag designs,” Speer says, “but all of the suspension features had to be learned by trial and error.” 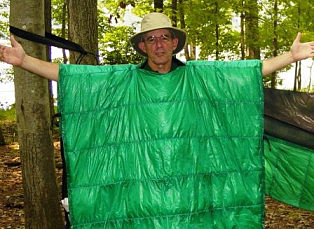 The most popular Jacks ‘R’ Better quilt is the No Sniveller, named in honor of Ernest Engman, aka Sgt. Rock, whose online tagline at his Hiking HQ discussion board is “No Sniveling.”

Sgt. Rock earned the honor because he inspired one of the most innovative facets of a Jacks ‘R’ Better quilt: a head hole that allows it to be worn like a cape, saving backpackers the extra weight of carrying an insulating jacket they might wear only for an hour or two a day in camp.

Michele Zehr, a backpacker from Charlottesville, Virginia, warmed to the idea of camping in a hammock in 2007 when she was preparing to through-hike the Appalachian Trail.

“When I was doing practice hikes for my AT hike, I originally bought an MSR Hubba tent,” she said via e-mail. “I loved the tent, but after one night in it, I knew I had to find another option. I didn’t sleep at all, because it hurt so much to sleep on the ground, so I started asking questions on www.whiteblaze.net, and a hanger that I’ve never met mailed his personal hammock to me to try out.

“After spending only a few minutes in it, I knew it was the way to go. I actually have had better sleep in my hammock than in my own bed at home. For my entire hike of the AT, there was only one night I opted not to sleep in my hammock and try the shelter. I did not sleep, it was incredibly painful, and that was the last time I ever tried that again. Every other night was spent slumbering comfortably in my hammock.” 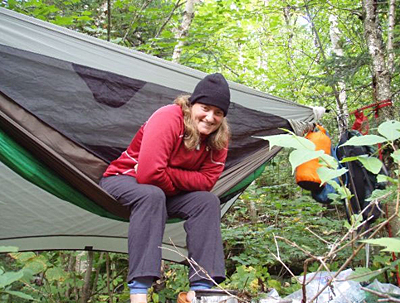 Michele Zehr, with her Jacks ‘R’ Better Nest and Hennessy Ultralight Backpacker Asym hammock, at her stealth campsite near Maine’s Carrabasset River, during her 2008 solo hike of the Appalachian Trail. (Credit: Michele Zehr)

Zehr, who hiked the entire AT over two seasons—2007 and 2008—has visited the Jacks’ workshop in Virginia and has become a JRB believer.

“First of all, they really love what they do, and they’re very down to earth,” she says. “I much prefer to support a smaller operation, and the cool thing is that they are innovators, always coming up with new ideas, and are connected with the hanging community, so they give advice and help people use their products.

“There are other underquilt systems out there, but the other popular one has synthetic filling, not down. I wanted down because for me it’s warmer than synthetic and of course there is the weight savings with down versus synthetic.”

Myers concedes that the one rap on down is the risk of it getting wet and losing its ability to insulate. But like most veteran down-insulation users, he’s rarely run into wet-bag problems.

“In seven years of hiking so far, my quilt’s been soaked wet one time, on a canoe trip where I dumped the canoe and the whole pack went in the water,” Myers said. Besides, he said, while artificial fibers can insulate when wet, in real-world camping conditions, “a wet synthetic quilt is just as uncomfortable as a wet down quilt.”

Just a few years ago, Tier and Myers were happy offering a single three-season under quilt. Their newest quilts, however, (like the Mt. Washington) reflect an ambition to bring four-season capability to hammock camping. It’s a significant challenge given the inherently drafty nature of sleeping suspended above the ground, but one the Jacks are taking on.

Great ideas. I've been thinking about useing a hammock in the woods for a couple years now, just haven't. This article probably has convinced me to do so.

Like everyone else I've used tents or tarps and assorted pads for decades but have also slept like a bear on the ground, in rough caves, on leaves etc. [before you ask-because I felt like it, knew Native Americans did and wanted to save weight], the year around hammock with quilt is an awesome idea...even if it dates me:) because I didn't know about them previously.

I have two of their quilts. Their gear and customer service are excellent. I can't sleep on the ground any more, hammocks have saved me from having to end up dayhiking for the rest of my life. Good to see the Jacks getting some recognition.