The Signature Series vests share common features, like front-mounted water bottle holsters, organizational pockets, and a small backpack for essentials. All are made of Cuben Fiber, which has the highest strength-to-weight ratio of any fabric, and claim zero bounce. However, each vest was designed for a specific running use based on that athlete's experience, style, and insights.

Anton Krupicka, an advocate for the minimalist running movement, brought a “less is more” philosophy to the design table to create the Race Vest. Weighing in at 5.5 ounces, Ultimate Direction says Krupicka's Race Vest is "the lightest wearable hydration system ever made."

Check out Krupicka talking about the design process in the video at right.

Scott Jurek, one of the most dominant ultramarathon runners in the world, knows what’s needed to run 100-plus miles. The man who won Western States a record seven straight times, designed the Ultra Vest, a 7-ounce hydration system for a full day outdoors. 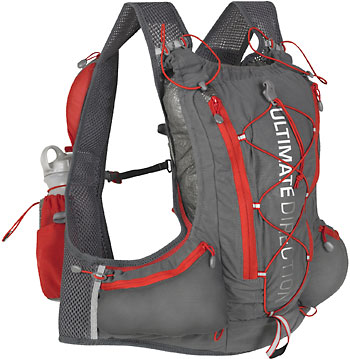 Peter Bakwin has climbed Aconcagua (23,834') in a day, run across Germany and France, and set speed records on the 220-mile John Muir Trail. His Adventure Vest carries everything from an ice axe and trekking poles to an extra layer and personal locator beacon. Ultimate Direction calls it "the pack that can do anything" for hiking, running, and climbing.