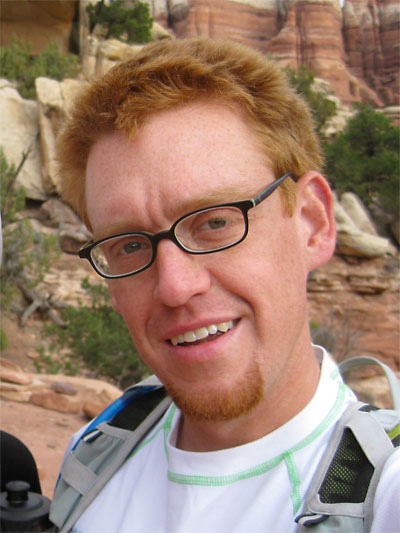 Bryon Powell likes trail running and ultramarathons so much, that in 2009 he quit his job as a Washington, D.C.-based attorney to make trail running his career, as well as his passion.

If you've ever wanted to run an ultramarathon (any race longer than a 26.2-mile marathon), or just wanted to learn more about running longer on the trails, listen up.

As Runner-in-Chief at iRunFar, which he founded in 2006, Powell covers trail running and ultramarathon news, race reports, and gear reviews. He also writes for national running magazines, is a Contributing Editor at Trail Runner magazine, and last year wrote Relentless Forward Progress: A Guide to Running Ultramarathons, which I personally recommend.

We caught up with Powell (well, he's a nice guy and let us catch up), to talk about the growing popularity of trail and ultra running, best and worst ultra moments, picking a first race, coaching tips, and putting that passion down on paper.

How did you get into ultra running?

I've always been a trail runner. I started running cross country at the beginning of high school, so you are always on the trails doing that. Then my coach got me into trail running. I moved to Washington, D.C., after college and didn't have a car, and found a trail running group to go to the mountains with. And it turns out they were a bunch of ultra runners and just from hanging out with them I got into it.

Do you remember your first race?

The Promised Land 50K, April 2002. And it definitely was a challenge. It was quite a mountainous course for the Appalachians in Virginia, but I really enjoyed it. It was a good mix of running and, as one learns getting into ultras, you end up walking some stuff, but it was beautiful.

Are trail running and ultras increasing in popularity?

They are. Both. And I think for separate reasons. There are a whole bunch of movements towards going back to nature. People are looking to get outdoors, rather than stuck behind desks for eight or ten or twelve hours per day. We want to do something different and connect with our roots, so getting out on the trail for trail running allows us to do that.

With ultra running, marathons have been around for a while in a popular sense, but in the last decade they’ve definitely grown more popular. You've got people like Oprah and Puff Daddy and the celebrity crowd going out and some people see that and say, “Well, Oprah can run a marathon. Maybe I should try something a little more than that.” 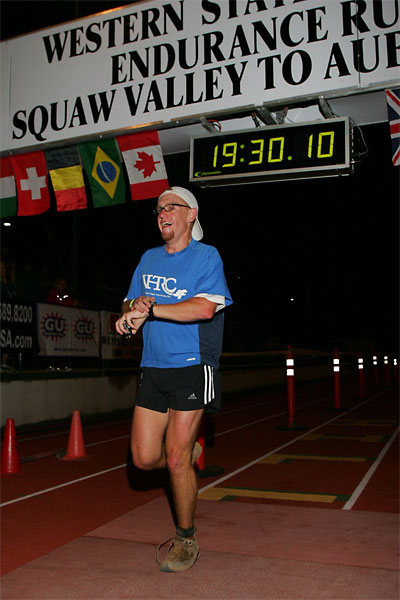 Totally an amazing experience to have that happen, where running becomes effortless for a decent stretch. It really shows you what the human body is capable of!

Probably walking the last 25 miles of the Wasatch 100 in roughly twelve hours [in 2005]. I'm proud of it. It’s one of the things I’m proudest of, that I finished that one out.

I was having a good race, but when my energy went that day, it went, and there was nothing I could do to get it back. I was with an experienced ultrarunner, my pacer, and nothing we did helped. It was literally walking ten steps, then leaning on a tree or a rock for ten seconds. It was just brutal.

Do you do anything else outdoors?

No, I'm pretty much a one-trick pony! I want to get into mountain biking, but whenever I get to a place where mountain biking is acceptable it’s always in the summer, and I always have an end-of-summer 100 focus race, and I don't want to go out there and take a digger and break a collarbone or something.

I'd also like to go nordic skiing. My girlfriend and I did a snowshoe across Yellowstone. We did a three-day backpack with snowshoes in Yosemite.

You've been a personal running coach. Any standard advice for novices? Things that come up over and over again?

Don’t do too much. I have a couple of coaching clients I have to motivate, but with most coaching clients you’re reeling them in. In the distance world you get sucked into doing more and more, because you love it, and you get the endorphins, and you love getting out there and in the ultra scene. You're getting all these great people doing all these awesome adventures.

So don’t do too much. Listen to your body. Have a purpose for what you’re doing. It doesn’t have to be a highly regimented training schedule, but if you’re saying, these friends are doing this long run on Saturday and someone else is doing something on Sunday, ask yourself, "should I be doing both?"

Is that a common rookie mistake?

It's not just a rookie mistake! Tons of veterans do it too! Doing too many events I call the “Fear of Missing Out.” You just want to go do cool stuff, so it's natural, but it's not always productive.

What's the best advice you’ve ever been given?

To go out conservatively in an ultra marathon. I see it so many times. Younger males are most prone to it. Especially folks who come from the road running world, go off thinking, “This is a slow pace.” Well, you really want to be going slower than that slow pace in the beginning, you want to be sooo comfortable, especially if you're going to be doing a 50- or 100-mile race.

You can keep running close to the same pace the whole way. If you go out easy, even if you’re not going to be running for the whole race, you can run for more of the race before you have to do a significant amount of walking. So, there’s so much more benefit. If you're breathing heavily, if you couldn’t talk to someone, you’re running too hard. Another good test is look around you. Do you see everybody walking? Maybe you should too!

No, unless they know it’s a pretty conservative goal. Go finish. Be happy with your time. There's such a learning curve to ultras that I don’t like to put the pressure on someone doing their first.

Any tips for keeping it fun?

Pick a race you’re going to enjoy. People hear about ultras. I mean the Badwater 135, it’s a 135-mile race through Death Valley in July. It's just not fun!

If you really love going into the mountains to train, don’t pick a super-flat route or vice versa. If you train on roads and really love that, don’t pick a 50K race with 12,000 feet of vertical for your first. You're not a strong climber and you’re not going to enjoy that.

A lot of it is just attitude. You can wallow in your misery and just stay with that or you can find fun. You can laugh at your friends and joke around with people. I wanted to drop twenty miles into the Wasatch 100 one year, and it was just a beautiful day and a beautiful place and eventually I felt better.

Don't stop eating or drinking if you feel bad. People do that. I've done that. You just kind of wallow in the misery. Just keep eating and drinking and you’ll bounce back, most of the time.

Powell's been trail running since 1992 and ultrarunning and blogging since 2002. In 2011 his book Relentless Forward Progress: A Guide to Running Ultramarathons, which may be the first practical guide to ultras, came out. I immediately bought it while training for my first ultra last year and personally recommend it for a full range of practical ultrarunning training and racing advice.

Why did you start blogging and then iRunFar.com? 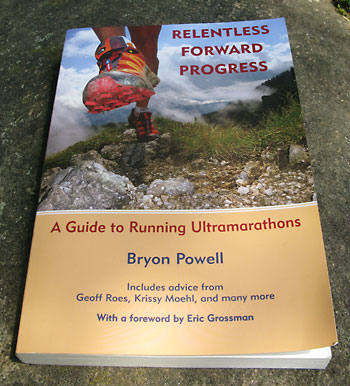 It was definitely an organic process. I started a personal blog when I started law school, because I was working and training and I didn’t have time to keep up with friends. I split off a running blog, and then in 2007 I was in a race. A Runner's World writer talked to me and we ended up doing an interview about how to do the first ultra and how to train for one. And I made a bunch of notes and eventually I put that up on my website.

I was like, maybe I can make my website a little more useful. So in October of 2007 I really decided to turn it from a personal running blog, like lots of people have, into an information source, just because I loved running and I love sharing information. And it kept going and it grew on its own through that effort.

I was an attorney in D.C., and I didn't really love that all that much. So in May 2009 I quit my job as an attorney and decided to take the plunge and I've been doing iRunFar and writing a book and everything full-time since then!

Did you have a lot of online content to draw upon for the book, or did you have to start from scratch?

Surprisingly, a lot of drawing from scratch! I had some resources on iRunFar, and a few other articles I've written for magazines and online and media sites, but, the majority was all original content that I had to go out and do.

What did you hope to accomplish with the book beyond the website?

There really wasn’t a focused ultra running training book and I really hoped to reach people, this crowd of folks that had run a marathon or a couple marathons and were looking for a good training resource. I just wanted to fill that niche.

What's been the reaction?

Unbelievable! I never would have imagined that some of these people would have wanted this book. I mean, we went through the first printing of 4,200 copies in like two or three months and then geared up for the third printing. Yeah, people loved it, pretty much unanimously. I thought it was a good book and that people would like it but, it’s been adopted really quickly by the community.

Any plans to do another book?

I think that if you ask someone after they run a 100-mile race, their first or their fiftieth, they’re going to say, “I'll never run one of those again.” I'm still recovering from the “I'm never gonna write one of those again!”

I think there's a good possibility there would be a second edition in a couple years. And I've thought about writing either a shorter book or an e-book or something, but no plans are in the works.

How do you balance it all?

It’s called working twelve hours a day, seven days a week! That’s how! I pretty much work all the time. I counted, and I have like six jobs, because I have the website, which is full-time. And I published a book and promoted it. I have freelance journalism, freelance copy-writing, coaching. I'm spread very thin. So I hope in the next year to start concentrating on a couple things intensely, maybe actually having a little free time. I’m not so good at the balance thing!

Stay tuned till next week, when we talk to Powell about his favorite ultra running gear, barefoot and minimal footwear, writing reviews, and what inspires him on the trail.

Have you read Powell's Relentless Forward Progress? Tell us what you thought of it below, or in a review.